You are here: Home / New Releases / The Sorcerer’s Spell by Dani Kristoff (@dani_kristoff)

Annwyn goes to bed dreaming of making love with her dead husband and wakes up in the body of another woman, a woman who is having hot sex with Dane, a powerful sorcerer. Her body has been stolen by Nira, a sorceress, who feeds her magical power through sex – the kinkier the better.

The curse she laid on Dane turns him into a werewolf every full moon and to complicate matters, Dane’s werewolf friend Rolf, succumbs to Nira when she temporarily repossess her body, causing jealously and confusion. But time is running out for Dane, as he will be a werewolf forever unless he can break the curse.

Rafael from the Collegium of Sorcerers is the only one Dane trusts to help them, but when a wider conspiracy is revealed, it’s up to Annwyn and her developing magical powers to save Dane before it’s too late. But can she seduce an unwilling werewolf to lure the sorceress into a final confrontation? 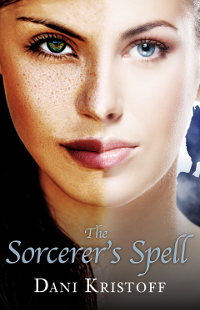 His hands on her skin distracted her. He was slipping inside, hot and eager. God, she thought, this is intense. She let out a moan. Her dreams had never felt so alive, so real. She was moving with him as he pushed inside her then eased away, only to thrust harder. She found it hard to concentrate. It had been so long since she had been intimate with anyone. ‘Let you in?’ she panted, feeling her body press against the mattress with the weight of her phantom lover. ‘Where? Let you in where?’

His kisses were hard and urgent, kindling a fire deep within her belly. ‘Let me into you. It’s the only way we can be together again.’

Annwyn thought he was already inside her. How much deeper could he go? But he needed her, needed her to open to him on every level.

In the haze of her dream she caved in, surrendered so deeply as she reached out to him that her body shook from the force of it. ‘Come to me. Come in to me.’

The face materialised as the haze of dream lifted, the smile vicious and victorious. In her confusion, Annwyn did not realise until it was too late that it was a woman’s face, with piercing green eyes, alive with a power she could not fathom. It was not Thomas at all.

Annwyn was ripped away. Her consciousness spun into darkness, all the while the man in her dream was making love to her, thrusting into her as her body responded.

Annwyn was tied to this action, linked inexorably to each thrust, each caress, each tantalising kiss. It was as if she was caught and held by a spell and there was no way she couldbreak out of it. Her body was owned by that man, that touch. She had no will to stop him. She was being taken high in the sky where the clouds flowed and drifted, leaving her with barely a sense of the world she inhabited.

For what seemed like a long time she floated, tumbling free with no bed, no room, no house around her. Burning in her ears, stomach heaving, and skin screaming, the sensations overwhelmed her. The only constant was those large strong hands, lifting her hips, angling them for the next thrust, hot mouth on her throat, biting without wounding.

Down, down to earth Annwyn plunged. She cried out with the force of the movement, the abrupt arrival. The crease of the sheets stuck into her back. An orange-tinged hue haloed the bed and beyond light and dark waltzed in the corner of the room.

Screwing her eyes shut, she avoided looking. There was something very wrong in what was happening to her. This was not Thomas’s body on her, in her. She jerked once, sucking in a breath. Then, opening her eyes, she screamed. Screamed like the devil.

Dani Kristoff is an Australian author based in Canberra, the nations capital. She delights in reading and writing paranormal romance. For the last 13 years, she been concentrating her efforts on science fiction, fantasy and horror. She’s just finished up a Masters in Creative Writing at the University of Canberra. Her day job is in the public service. Her partner is also a writer and they live is a big house overlooking the mountains.

Dani will be awarding an eCopy of Sorcerer’s Spell to 3 randomly drawn winners via rafflecopter during the tour, and choice of 5 digital books from the Impulse line to a randomly drawn host.