Sasha Michaels is a psychic with an affinity for houses. And he’s homeless. Go figure. After months of sleeping rough, he stumbles upon an abandoned house, and the lonely place beckons him inside. He’s finally safe . . . until someone comes blundering in to his hideaway.

House-flipper Nick Cooper lost everything in the recession. Desperate to revive his business, he turns to a loan shark to fund his comeback project: flipping an abandoned house full of potential. But it turns out the house has an unexpected occupant. 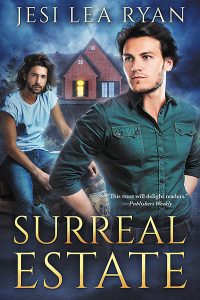 Nick and Sasha make a deal: Sasha can stay in exchange for helping with the renovation. To both of their surprise, the closer they get to the loan shark’s due date, the stronger their feelings for each other grow. Problem is, Nick isn’t the only one with feelings for Sasha, and now the house doesn’t want to let Sasha go.

USA Today bestselling author Jesi Lea Ryan grew up in the Mississippi River town of Dubuque, Iowa. She holds Bachelor’s degrees in creative writing and literature and a Master’s in business administration, along with an assortment of Associate’s degrees, certificates and designations, none of which have anything to do with writing books about psychics.

Jesi considers herself a well-rounded nerd. She loves studying British history, exploring foreign cities on Google Earth, watching TED talks, listening to true crime podcasts, floating in her pool, and reading or listening to books — approximately two hundred books a year in many different genres. The side effect of all this is that she’s the ideal person to have on your trivia team, or what a former co-worker called “a dump truck of knowledge.

Her biggest vice is procrastination. #TheStruggleIsReal

Jesi spent most of her adult life in Madison, Wisconsin, but now lives in Maricopa, Arizona, with her spouse and two exceptionally naughty kitties. Summers may be brutal, but at least she doesn’t have to shovel the heat off her driveway.

To celebrate the release of Surreal Estate, one lucky person will win a $20 Riptide gift card! Leave a comment with your contact info to enter the contest. Entries close at midnight, Eastern time, on November 10, 2018. Contest is NOT restricted to U.S. entries. Thanks for following along, and don’t forget to leave your contact info!