Seven years ago, Sebastian Munro changed his life immensely by transitioning and starting a graduate degree at the University of Ottawa. Now that his degree—and his cash flow—has run its course, however, he finds himself on a Greyhound bus back to his suburban town outside of Toronto in early 2006. Though his high school friends are well aware of his transition, many have yet to see Sebastian face-to-face.

Instead of dreading the reunion, Sebastian looks forward to it—until his parents announce their divorce, his former best friend won’t speak to him, and he realizes he has become a stranger in a place that was once so familiar. Rather than returning to Ottawa, he is forced to stay in Durham Region when he witnesses a crime at the local restaurant run by a family friend. Until the trial finishes, and until an academic job comes through, Sebastian must learn to stay exactly where he is—whether he now wants to or not. When he reaches out to his former best friend’s older brother, Garrison, their budding relationship shapes and changes everything Sebastian thought he knew about his previous life, secret identities, and the power of home.

Now that Sebastian has found a way to survive in his hometown as the person he always knew himself to be, he realizes he faces a decision especially as an academic job opportunity emerges. Does he continue with his new fantasy life in his hometown, thereby leaving his former academic and trans community aside—or does he go back to the life that made him who he is now and leave his family and friends one more time? 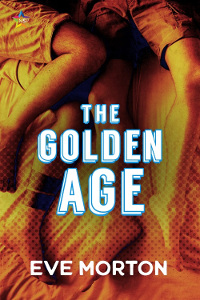 I was late for the bus home.

Discarded couches, plates, and jagged forks and knives packed the city streets, all detritus from the former student life. I thought leaving before the exam period was over would allow me to avoid the crowds. The exodus, as Ken called it. He was being dramatic. Biblical. A Shakespearean scholar, through and through. Then I remembered the Easter and Thanksgiving rushes, the deluge of students desperately trying to go home with too many bags of dirty clothing. I was caught off guard by the trash on the street, still a city bus away from the Greyhound station that would take me back to my hometown.

These students and the remnants of their short-term apartments were the minifloods before the mass exodus at the end of the semester. Ken had warned me. The streets will be packed, so think ahead. I brushed off his fastidiousness, but I should have trusted his insight, culled from experienced history rather than scholarly articles and delivered like folk wisdom. I’d booked my Greyhound bus home after Easter but before the final date for students to leave the dorms, thinking this was enough to avoid the crowds and keep Ottawa pristine in my mind. I wanted the capital to have stayed as staid as Ken, as picturesque as a postcard, as parochial as a footnote. Maybe that way, leaving would hurt less.

Instead I was left with nothing to read to pass the time but a thin Stephen King novella. The Running Man was the only book that didn’t fit into my storage locker; I couldn’t bear throwing out books, so I brought it with me. The furniture in my apartment were cast-offs, and there were always hungry graduate students looking for toasters. I could pass them off, rotate. Ken’s new student was walking in my furniture shadows—but the books, I kept. I had to and I didn’t even like King that much. I had many copies of his work because of Michael, Emily, all of them from Whitby, our hometown outside of Toronto. I may not have devoured King, but I loved them. A cardboard box I kept in my storage locker, bursting at the sides, was like another ticket home, a reminder of voices I’d tried to silence since my degree began. I may as well take this piece of history with me. Even if I didn’t like King all that much, I could still find solace in the words.

But I was running late.

My shoulder bag dug into my skin as I stepped onto the city bus and squeezed into a standing space all my own. The Greyhound station was in the heart of downtown, while my storage locker had been on the edge; the city bus fed me through the surface roads to the station where I’d catch another bus home. The trip was long, odious. Made even longer by one red light after another.

Another red light. Another student stop, a casual group of teenagers—maybe some whom I’d taught—laughed as they stepped on. End of the year. End of their exams. The cars lined up on the street. Rush hour. Another red light. The bus should have already arrived. I should be checking in. I looked out the window at more discarded couches and dishes and more students carrying cases of booze, their voices celebratory.

“I want out.” I walked to the front of the bus and repeated my request. “Please.”

The driver eyed my bag filled with toiletries and clothing, as if I were leaving for only a night. He glanced up, gaze lingering too long on my face. “This still isn’t a stop.”

With the eyes of a martyr, he opened the door. I got off as the light turned green. The bus rocketed ahead of me, going faster than I thought possible.

A flicker of doubt rushed over me. Had I made a mistake? I walked faster and faster toward the city centre. Another red light and city traffic bloomed. The bus was faster, but it was always going to be stopped. I knew shortcuts to the city centre, learned from the early months of my testosterone shots when I was undecipherable as man or woman. I knew all the covert alleyways and the hidden catwalks, the city’s secrets where I would not been seen. My heart panged at the thought of leaving everything behind. It wouldn’t be forever, like that horrible in-between transition phase wasn’t forever either, but the discarded dishware and books that looked so much like mine made leaving feel that much more permanent.

I passed the bus after five minutes of fast walking. My legs were bruised from my bag banging against them. My lungs ached. Calves smarted. The pain diminished when I saw the blue of the station. Greyhound. A line was there, but not too long. When I was in New York City with Ashley, an old girlfriend before my transition, we’d watched in horror as our bus departed before its designated time because it was full. Though Greyhound had sent another for those who were still lingering, watching it depart while standing in place was a sucker punch I’d had to stay still for, like counting the days backward before surgery. Now, when I could taste my mother’s weak tea and smell my father’s secret cigars, I couldn’t bear to watch the bus pull away.

Another surge of speed flowed through me. I darted across the road between parked cars and emerged on the sidewalk. I was almost at the station door when someone yelled at me.

I froze. A car horn honked simultaneously, but I realized it was unrelated. The person shouted again.

I saw an old man under the city bus station awning: his face worn, his jeans frayed at the edges, and his baseball shirt from years ago. He raised a hand in the air and repeated his words.

“Plenty of time! You need to slow down.”

I was angrier than the first time I’d been catcalled at thirteen. I turned away with an audible scoff and ran the rest of the way inside of the station. My shoulders smarted and my lungs still ached, but I was last in line.

Not until I was seated near the back, my bag stored underneath the bus and the now horribly bent out of shape book in my hands, did I think of the bum again. His words were personal. Not the typical ranting or lecherous stares of downtown. He was giving me advice. Like Ken. He was…

I turned away from the window. I stared at the cover of my book. I opened it and tried to read.

I’d been gone for so long.

Eve Morton is a writer living in Ontario, Canada. She teaches university and college classes on media studies, academic writing, and genre literature, among other topics. She reads tarot, has a lot of tattoos, and loves all things occult and supernatural in nature. She also loves true crime, especially the forensic side of it, and is often swayed by a really good podcast (even more when it is funny). She continues to do research work on LGBTQ communities, media representation, and film after completing her PhD in 2019. Find more information on authormorton.wordpress.com.