For over a century, Kita has paid for his sins in innocence and blood. The sin of being born, for daring to exist, and for polluting the fae race with his tainted, mixed heritage. Half fae and half human, he is an abomination belonging to neither race, yet caught in the midst of their feuding.

After winning his freedom from a lifetime of slavery to the fae, a ghost from his past has come to pull him back into the depths of hell. And this time, there will be no escape.

To the world, Jacen McKenna is a gang leader, arms and drug trafficker, slaver. Labels he wears proudly to cover his true intentions. He is a warrior among his kind, dealing justice to his enemies and mercy to those without hope. He’d thought getting thrown into Babylon, a prison notorious for its inescapability, was the ultimate low point in his life. He was wrong.

From the second he laid eyes on Kita, he knew fate wasn’t done screwing him over. Beautiful, wild, and defiant, Kita brought out every protective instinct he possessed; ravaged him with emotions he never thought himself capable of. He tried to keep his distance, but fate, yet again, had other plans.

Caught in an impossible situation, they both have to learn to trust each other. But trust was a precious commodity in a world that had turned its back on them. Together, they must fight if they want to survive the war brewing in their midst. 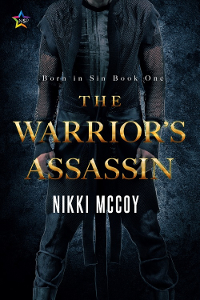 Kita shook himself to clear his head, wondering what had made him think of that night so many years ago. Normally, his repressed memories came to him in dreams. Or, rather, nightmares.

At thirteen, he’d been foolish enough to desperately believe in Bergiese’s vision despite his cynicism. Later, he had learned to see the truth behind the pretty lie. There was no savior or salvation waiting for him somewhere down the path of his life. There was only misery and pain, and he was so incredibly sick of it all that his mind had begun to slip back into the state of bleak abjection he’d carried in his youth.

The future was a yawning maw empty of anything that made life worth living. What few reasons for happiness he’d found had faded quickly, leaving him raw and desolate. He knew it was time to end everything, yet he couldn’t bring himself to put a gun to his head and pull the trigger.

Funny how a person with no pride could consider suicide to be cowardly.

He drew back into the shadows of the alleyway when the door to the abandoned hotel opened. Nicolas Gordon, Nicki as he was known on the streets, walked out followed by a shorter man wearing a trench coat. The hood of Nicki’s sweatshirt was pulled down low to hide most of his face. Not that his poor attempts at anonymity over the past week had worked in his favor. He’d been found, and he would die tonight.

The two men spoke quietly, the steam of their breath curling in the frigid night air. They began to walk rapidly in the other direction. Kita slipped from his cover and entered the building, the squealing of rusted hinges on the door the only sound.

The area was mostly deserted, although not as run down as some of the neighborhoods he had seen. This small town, like so many scattered across the country, had had the misfortune of being located near a Crown Federation military base.

During the Islandar Civil War, more than a century ago, all of the bases had been targeted and summarily disabled. Some still lay in ruins from domestic terrorist attacks while others had been taken apart from the inside and left to rot in the wake of espionage and independent financial ruin.

Overall, Okasis fared decently in comparison. Its Federation base still functioned, which was a boon to the town’s economy, such as it was—struggling and on the constant verge of collapse.

He reached within himself for his power of pyrokinesis and sparked a small flame at his fingertip. With it, he searched the rooms on the first floor for Nicki’s belongings. If the reports were true, Nicki carried on him a laptop with information potentially disastrous to the Federation. Kita had been charged with confiscating the laptop and killing him.

Pinard, his keeper in the ISBF, Internal Security Branch of the Federation, had told him in no uncertain terms not to go through the laptop himself. However, the unusually avid interest in this mission had drawn his curiosity. The order had come from General Laurs, head of security, and was highly classified.

That in itself threw up a red flag.

Why would an insignificant peon on the low rung of society’s ladder be such a high‒profile target? The Federation didn’t send its dog on assassinations anyone could pull off. It just didn’t add up, even if the man was a renegade jinn.

He found the meager belongings in the last room amid layers of decay and rat droppings. In the duffel bag was a battered laptop one would hardly expect to find classified intel on. With the decryption device he’d liberated from Pinard’s desk, he easily hacked through its security. Two documents in particular stood out to him.

What he read in them made his blood run cold. It had to be some kind of mistake or propaganda to use against the Federation.

Yet, the more he read, the faster it became obvious this wasn’t a hoax. Most of the information contained in the documents correlated with events only the ISBF knew about. Critical threats against the Federation made over the past several decades that had been swept under the rug.

Briefly, he scrunched his eyes shut. He had hoped for something to hold against Pinard, but this… This was well beyond the limits of anything he could handle on his own.

Of all the endless ways this information could be used, only one outcome was certain. Their country would be plunged into another civil war. Serving these documents up to the general would only exacerbate the situation and quicken the inevitable outcome.

Nikki McCoy lives in the vast, open spaces of Wyoming where the wind is a beast and the snow dominates for 10 months out of the year. But the night are filled with magic and mystery.

It’s during these nights that her world becomes a collage of cunning intrigue, edgy mysteries and sexy, sometimes brutal men. She loves to let her imagination run away with her. The darker the fantasy, the greater the spoils.