Cocky American Ad Exec, Bradley Connors, and his courageous ex-RAF fighter pilot husband, Janes Garrett, are back in London and once again separated through the power of time. With James stranded  in 1956 during a polio outbreak, a world of homophobia threatens to keep him from the man he loves. How will he talk himself out of the trouble he’s unwittingly creating? Who from his past can he rely on to help him get home to Bradley? Will they be able to save their friends from the deadly pandemic or will they too perish in the attempt? And can they do all this while reaffirming that nothing can tear their love apart, not even time itself? Time Cures is a love story like no other. It’s a romance through time. 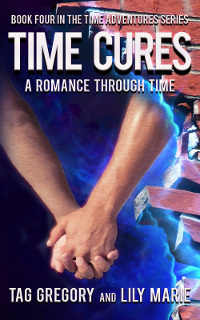 “Considering the length of time he was unconscious, I feel it imperative that he remain in hospital for at least the next twenty-four hours for observation. Provided no other symptoms manifest, he can be released to his family at that time,” Dr. Donaldson advised.

James was relieved that the diagnosis wasn’t worse. He knew Bradley was still going to be angry at him for getting hurt. Again​. At least he ​would​ be angry – once Bradley got over being relieved – when James finally got around to calling him.

“Pardon me, Doctor,” the nurse interrupted before the doctor could make his grand exit. “But, before ya came in, the patient was showing signs of confusion and talkin’ all sorts a nonsense. I’m thinking he mighta banged his ‘ead a bit harder than he’s lettin’ on.”

“Confusion?” That got the good doctor’s attention.

“Yes, Doctor. He was spoutin’ some nonsense ‘bout needin’ to ring his ​husband, ​ an’ seemed to think he had a ​telephone​ in that kit bag of ‘is.” The nurse pointed to James’ messenger bag while giving the doctor a knowing look.

“Is that so . . .” The doctor turned back to his patient, one bushy eyebrow raised inquisitively, much more interested in the young blond man now than he had been initially. “Do you remember your name, son?”

The doctor nodded and asked another question. “Do you remember the accident that gave you that bump on the head?”

James thought about it, but just came up blank. He started to shake his head to indicate ‘no’, only the gesture made the dizziness and nausea worse. He groaned and dropped his head into his hands. “No,” he moaned.

“Well, that’s not a good sign,” Doctor Obvious surmised, his eyebrows knitting together so closely that they now looked like one long, hairy caterpillar creeping across his forehead. “Now, what’s all this chit chat about a telephone and a husband?”

“I just want to call him and let him know where I’m at,” James offered, feeling and sounding pathetic even to his own ears.

“You say you have a . . . ​Husband​ ?” The doctor very clearly emphasized the word ‘husband’ in a disbelieving tone of voice.

“Yes! I want to call MY HUSBAND, okay?” James was losing patience with the proceedings and his voice had risen commensurately with his annoyance level. “His name is Bradley Connors. We’re here visiting from the United States; Bradley has business with a big client here. We’re staying at The Strand Palace. He’s probably waiting for me there and, most likely, has already called the police to help find me. If you’d just let me get my cell phone out of my bag I can call him and he’ll come down here and take me to a different hospital where they’ll stop asking me idiotic questions . . .”

The doctor interrupted him before he could continue his rant. “Do you know where you are right now?”

“You mean the hospital? The nurse said it was St. Bart’s. Or do you mean London?”

“Righteo. And what’s the date?”

“Close. You got the date correct but it’s Tuesday. What about the year?”

“2017 . . . ?” James answered, starting to get a funny feeling about where all these questions were leading.

“Hmmmm,” was Donaldson’s only reply. Then he turned to the nurse with more directions. “Clearly, this is a much more serious case than I previously suspected. We could be looking at Traumatic Encephalopathy or, perhaps, some type of advanced psychosis. I’m going to call in Dr. Abbott for a psychiatric evaluation. Change the charge order to note a seventy-two hour hold.” Returning his attention to the patient he added, “never fear, young man. We’re going to take good care of you. Hopefully, by the time we’re done here, you’ll be in tiptop shape once more, back in full possession of all your mental faculties.”

With that proclamation, Dr. Donaldson spun about and started for the door.

“Wait,” James shouted after the departing man before he could exit. “What year is it, really?”

TAG has been writing for almost a decade, starting out with a hesitant toe in the realm of fanfiction before venturing into the scarier world of self-publishing original works. With an eclectic background as a lawyer, microbiologist, all-around nerd, and adventurer, TAG brings that off-kilter sense of humor, unbounded curiosity, a love of details, and astonishing powers of research to all their writing. If you are looking for a griping story, with compelling characters that deal with real world issues, then you’re in the right place.

Lily has been writing close to for twenty years, but has only ever (until recently) dipped her toes into writing fan-fiction. Lily is a born and bred Londoner and loves nothing more than getting lost in a book – whether it be writing one of her own, or reading something from one of her favorite authors. In her spare time, Lily likes to think of herself as somewhat of a disability rights activist, helping to create change for those that may not have a voice to speak up or, like Lily herself, those that may have been too quiet to stand up for themselves.