What Would Be The Best Halloween Sex Ever?

Halloween is upon us, and so, let us ask: if you could have sex with anyone, or anything, anywhere at Halloween, then what would you choose? Forget likely or realistic answers – this is a season of the supernatural, not the natural, so let your imagination run wild! The best Halloween-themed answer will win a set of three ebooks from MysticErotica.com:

To enter, enter your hottest Halloween fantasy scene – who (or what) and where – in the comments below. Please make sure to leave your email address in the BODY of the comment to be counted. Winner will be chosen on the 31st October and announced in the comments of this post. The competition is being drawn and administered by C M Fontana – Erotica For All takes no responsibility.

END_OF_DOCUMENT_TOKEN_TO_BE_REPLACED 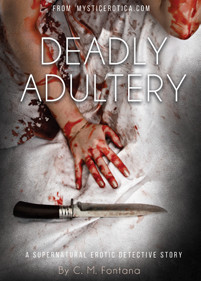 END_OF_DOCUMENT_TOKEN_TO_BE_REPLACED

Here’s an author interview with C M Fontana. Take it away, C M…

END_OF_DOCUMENT_TOKEN_TO_BE_REPLACED

His first two full-length novels, Deadly Adultery and Sexual Sorcery, were published for Kindle in September 2015. Deadly Adultery, set in the present day USA, follows Detective Stephanie Richter as she investigates a wedding-day murder which draws her into a two-hundred year old mystery. Sexual Sorcery follows an unwitting academic who, on the trail of a set of stolen books, stumbles into the occult underworld of Victorian London, where he must deal with a host of unusual characters, and women who are far more confident and less retiring than he is accustomed to – including an investigator with a talent for seduction, a mesmerist collecting a harem of beautiful ladies, and a woman who believes she has had sex with Satan.