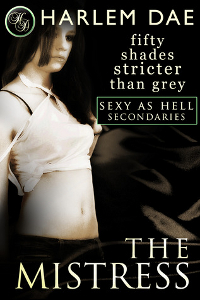 The Mistress is a short story that is part of the Sexy as Hell world created by Harlem Dae – also known as the fabulous writing team of Lily Harlem and Natalie Dae. It’s classed as book four, but I’ve only read the first book in the Sexy as Hell trilogy of novels, and it didn’t matter too much. It works perfectly well as a standalone, though I’ll definitely be checking out the other books in the series.

This short story deals with Fifi and Carlos, characters who feature in books #1 and #2 of the trilogy. As Zara, his previous Mistress, now has another slave, Carlos is given to Fifi. No one is really sure how this will work out — least of all Fifi and Carlos, but they’ll give it a try.

It turns out that Fifi has wanted to be Carlos’ Mistress for a long time, and now she is, she’s happy. Or happier, anyway. Because there’s more to the relationship for her than just slave and mistress, but can she bring herself to tell him the truth? Afraid of rejection, Fifi keeps quiet – but she can’t keep her feelings hidden forever.

The Mistress is a very good quick read. I’ve liked all of the characters I’ve met so far in this series, and it’s nice to get to know them all better, find out what makes them tick, and so on. The storyline between these two characters was tense and intriguing. Add that to the super hot sex and you have a read that will definitely get you hot under the collar – boiling, in fact. 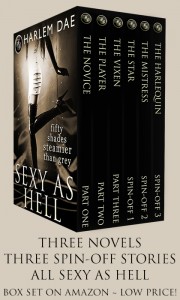 The Sexy as Hell Trilogy, The Novice, The Player and The Vixen has been released in a box set along with the three secondary character spin-off stories, The Mistress, The Star and The Harlequin.

For a limited time only this box set is at a bargain price.

END_OF_DOCUMENT_TOKEN_TO_BE_REPLACED 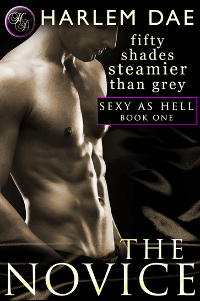 The Novice is the first book in the Sexy as Hell trilogy by Harlem Dae, also known as the writing team Lily Harlem and Natalie Dae.

This erotic novel tells the story of Victor and Zara. Victor is a successful single businessman, and Zara is what can only be described as a sex performer working out of Soho. They meet by chance in a coffee shop, where Zara picks Victor up for some sexy fun. Naturally, Victor’s pleased that he’s going to get some action, until he finds out that Zara isn’t exactly the most demure woman. In fact, she’s downright rude and demanding, and he doesn’t know how to deal with it. Her forwardness frightens him. He calls her out on it, implying that there’s something wrong with her.

Zara laughs in his face and tells him he has a lot to learn about women and sex. Victor doesn’t believe it. Between them, they end up making a bet. One month, and Zara will teach Victor everything she knows. Only Victor doesn’t realise quite what a kinky chick he’s gotten himself involved with.

Soon his previously vanilla life is an assortment of domination, submission, spanking, voyeurism, and all manner of unconventional sex, all set in London, capital of the UK. Victor learns much about himself, as well as people he thought he used to know well. His head is thoroughly messed with and before long, he’s wishing he’d never met Mistress Zara.

Dare to take this twisting journey with Victor and you’ll learn the ropes with him, experience every carnal sensation and fall into a dark and dangerous love that grips like a fist and binds like a collar.

Get to know Zara, his sultry teacher, and you’ll gasp when she doles out her sinful instructions but then delight in the stunning results she not only demands but achieves. It seems Heaven and Hell are not so far apart when she holds the reins.