About Shelter from the Storm

A healer and a warrior fight to survive the winter . . . and each other.

Grif is tired of life as a mercenary—tired of life, period. So he heads off into the mountains, not much caring whether he lives or dies. But when his indifference leaves him unconscious in a snowbank, a stranger finds him and insists on dragging him back from death.

Kiernan doesn’t really have time to nurse a stranger back to health; he’s on an important mission. He doesn’t know why the message he’s carrying is significant, but he’s determined to deliver it, even if it means risking his life in the winter mountains. Still, he can’t just walk away from a fellow traveler in need.

END_OF_DOCUMENT_TOKEN_TO_BE_REPLACED 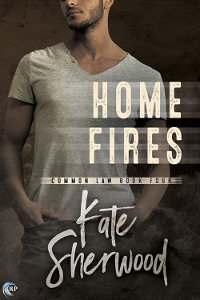 Trouble comes to Mosely, Montana, from the outside world. When the residents of Mosely are left on their own, they can make things work. Sure, there’s always been a militia operating up in the hills, but they were small-scale—just survivalists doing their thing—until organizers came in from out of state. Now Jericho Crewe and the rest of the sheriff’s department are facing down a heavily armed band of fanatics, and the feds are busy elsewhere.

The odds are hopeless, but Jericho swore an oath to serve and protect the citizens of Mosely. He won’t walk away from that, even if Wade Granger’s begging him to run away somewhere and finally be together the way they always should have been.

But this time, it’s Jericho who refuses to leave Mosely, even if staying kills him.

END_OF_DOCUMENT_TOKEN_TO_BE_REPLACED

About Darkness, part 3 in the Common Law series

A murdered prostitute. An obvious suspect. Clear evidence. For once, Jericho Crewe has a straightforward crime to investigate, and Wade Granger isn’t involved.

It all seems so simple, but Jericho’s instincts won’t let him rest. As he investigates, he finds troubling suggestions that the murder is a part of something larger and more sinister. But working within the boundaries of the law may keep him from finding the truth. If Jericho doesn’t break the rules, an innocent man may rot in jail while a killer remains free to strike again.
END_OF_DOCUMENT_TOKEN_TO_BE_REPLACED

He doesn’t really need a biker war on top of it all, but as the bodies start to pile up, it becomes pretty clear that’s what he’s got. Not only that, but Wade’s involved somehow, and as soon as Wade is a part of something, things that seemed clear become cloudy.

END_OF_DOCUMENT_TOKEN_TO_BE_REPLACED

LA cop Jericho Crewe got the hell out of Mosely, Montana, when he was seventeen. Fifteen years later, he’s back, and everything is just as messed up as when he left. He planned a quick visit to deal with his injured father, but of course things are never that simple. Family complications, police complications, social complications—and, as always, Wade Granger complications.