Andrew ‘Duff’ Wagner goes straight to the gods to get his love match made. He relies on Men Wanted, the matchmaking service run by Apollo, Artemis, and Eros to find his perfect match. He’s in love with a certain lawyer, but there can’t be enough magic in the cosmos to get them together, right?

END_OF_DOCUMENT_TOKEN_TO_BE_REPLACED

Hello, everyone! This is Quinn Anderson, author of The Other Five Percent and the Murmur Inc. series. Thanks so much for following my blog tour. I’m thrilled to be here and to talk about my latest novel, coming out July 10th. Stay tuned for fun facts about The Other Five Percent, an inside peek at writing it, and to find out more about our dashing leading men. Leave comments on the tour posts for a chance to win a $10 Riptide Publishing gift card!

END_OF_DOCUMENT_TOKEN_TO_BE_REPLACED

About All Wheel Drive

Healey Holly is battered, depressed, and looking to go to ground in his childhood home. He wants to rent the garage apartment, but it’s Diego Luz’s place now, and the last thing Diego wants is to share it. 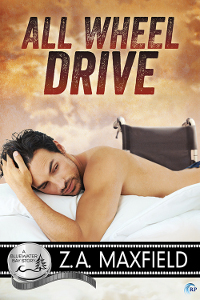 Diego is recovering too—from the accident that put him in a wheelchair and the death of his mother shortly after. The garage apartment is where he’s keeping his mother’s things, and as long as they’re up those stairs and he’s down on the ground, there’s no way he can deal with his loss.  And that’s just how he likes it.

Healey believes in science. Diego believes in luck. It will take a blend of both, and some prayer thrown in besides, for these two to learn that it’s the journey and the destination that matters.

END_OF_DOCUMENT_TOKEN_TO_BE_REPLACED

Are you doing any blogging on your own?

Recently, I updated my website nancyhedin.com and am currently writing a blog with the theme, Flannery Will Get You Everywhere. It is a series of blog entries about Flannery O’Connor’s work and advice to writers. For example: In her letters Flannery wrote, “If you have only written it three times, it is still, supposed to be no good. You have a defect of patience, not a defect of energy.”

END_OF_DOCUMENT_TOKEN_TO_BE_REPLACED

I’m a firm believer that the good friends are the family members that we get to choose. The get us on a level that sometimes our biological family doesn’t. When I came up with the idea of Ringside Gym and the men who were involved with it, I wanted to make sure that their relationships reflected that feeling.

Max would be the “middle” child of the trio of heroes. He’s my peacemaker, the one who wants to make sure everyone and everything is okay. But Max has a problem – he doesn’t know what to do when he’s not needed. Zack no longer needs him now that he has Noland in his life, and their other friend Eli has been MIA due to his MMA career. Max’s life begins to drift and he questions not only what he wants, but also who he wants in it.