You are here: Home / Reviews / eBook Review: On His Terms by Sierra Cartwright 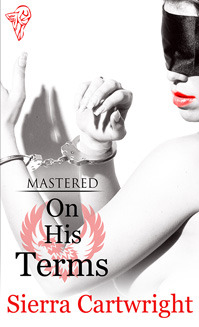 I very much enjoyed book one in the Mastered series, With This Collar, so I looked forward to checking out book two. On His Terms is the story of Chelsea Barton, an ambitious PR and event planner with a successful company. But, due to her ambition, she wants to make it even more successful. She’s determined to land the business of Evan C, up and coming rock star. But he won’t even give her a second glance. He’s also a Dom, so Chelsea suspects that getting trained as a submissive will give her an edge that may help her snag his custom.

Chelsea knows from her contacts that Alexander Monahan is the best man to help train her. She’s horrendous at submission, but it’s a must for her to move forward. So she approaches Master Alexander with her plan. He resists at first, but Chelsea is persistent and he eventually relents. From there on in, Chelsea is subjected to things that had never even crossed her mind. Not a natural submissive, she finds many of the things Master Alexander commands her to do humiliating, but her stubborn streak carries her through. After a while, things aren’t so bad. She finds submitting much easier. And it soon becomes apparent that there’s a good reason for that.