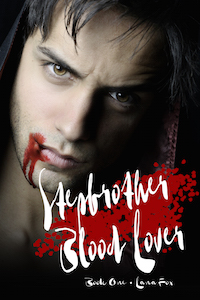 Helene and her stepbrother Darren have always fancied one another, but until tonight, when Darren returns to Helene as a newly sired vampire, the pair didn’t dare act on their desires….

When my bedroom door started to open, I’d just changed into a T-shirt, ready for bed. I was sitting there about to take my sleeping pill and turn off my bedside light, when suddenly there he was stepping into my room.

My jaw dropped. My pill rolled to the floor.

It’s hard to describe in words just exactly how he’d changed. It wasn’t to do with his height, though he did seem taller somehow. It was more to do with his energy. He glowed slightly, like a dimly lit bulb. If you’d walked into a busy bar, he’d have been the first thing you’d see because he’d occupy the space like he alone was in it. He was strong, mysterious, and surging with sexual energy. I stared at him, agog. It was as if he was filled with moonlight, as if his whole body carried something cool inside that belonged to the night. What’s more, his eyes were this alarming color, so powerfully dark, while the pupils at their centers were blacker than black. I could feel them swallowing me up, pulling me in, making my flesh creep hungrily towards his.

But really, I knew. My brother was a dead man walking.

He kicked the door shut behind him and the noise made me jump. My pulse beat even harder in my head as he started to walk towards me, saying nothing, just watching me intensely, and it seemed for a moment as if he was my pulse, as if the thumping inside me was coming from him. I felt stalked, preyed on, owned. I longed to give myself to him. I could feel his stare all over me—on my arms, throat, collarbones, and inside my T-shirt where my nipples stiffened, and lower in my knickers where I was so wet that I was ready to be taken. My knees parted of their own accord, aching to reveal my thirsty pussy.

“Helene,” he said, his voice far deeper and richer than it used to be. “Turn off the light.”

Without even thinking, I reached for my bedside lamp, flicked the switch, and plunged the room into darkness.

Darren still glowed. I’m not kidding. And it was as if twice as much power coursed from his body. I couldn’t tear my eyes away, and my cunt felt so heavy, so wet with lust that I writhed in my seat, arching towards him. He stepped in close so he stood between my knees, but I didn’t dare reach up and touch, much as I longed to. He was the one with the power. And that’s how I wanted it.

“Helene,” he said again, his voice smoldering with depth, as he reached towards me and traced my jaw with his fingertips. It was like being touched by desirous static—where the pads of his fingers touched my skin, electricity thrummed, painful but beautifully exciting. I gasped, stung, trembling from the energy and parted my thighs even more, my lust strengthening by the second. I’d never felt this kind of hunger. It was all consuming. Controlled by my desire, tortured by it, I made to thrust my hand between my legs.

“Stop,” he told me, his voice strong and sure. “Don’t.” And just like that, I was frozen, unable to touch my aching clit, unable to sate my hankering self.

He had me in his thrall.

His stare burned on my skin and it felt like fingers touching me—like actual, physical fingers. When he stared down at my left breast through my T-shirt, I felt as if his hand was cupping the flesh, pressing against my stiff nipple. When he gazed down at my thighs, it felt like his lips were brushing against the skin. “Respond,” he said, his eyes pulsing as he glared down at me, and suddenly I could move again. I groaned out loud, arching towards him, begging him to touch me, to touch me right now.

“Please, Darren!” I gasped. “Oh God, touch my clit.” Yes, that’s what I said to my brother—not, Oh my God, they’ve killed you and you’re now possessed by darkness, but Do things to me that a brother never should.

I was shuddering with longing, my pussy so ready that I’d never felt so slick. I knew he was a vampire, but that wasn’t my priority. My priority was fucking him as soon as humanly possible—giving myself fully to his every dark desire, having him take me in whatever way he would.

I felt his fingertips brushing down my throat, the energy tingling like static at our contact, and it was as if the burn of orgasm touched at my flesh, pleasuring my throat, provoking my clit, making me whimper with longing. A tide of longing crashed inside me. I had to have his mouth on my throat, his teeth buried into my flesh.

Only now did I realize my fingers had leapt to my clit and I was rubbing myself frantically. “Darren,” I cried out, thrusting my hips towards him, my pussy so close to exploding into bliss. And knowing that having your blood drunk was second only to screwing a vampire, I cried out, “Drink me, Darren! Drink me!” As he watched, unanswering, his piercing eyes staring down at me, my pulse raced with blood for him to claim.

He rose to his feet, stood in front of me, pressed one hand onto the crown of my head and tipped it to one side. Energy tingled wantonly where his fingers touched my skin, as he leaned right over my body. He stood right between my thighs, unzipped his jeans, pulled out his already hardened cock. I was shuddering with longing, gasping for him to do me, my orgasm threatening so hard as I plunged my hand inside my knickers and kneaded my slippery cunt—my slippery, desperate cunt. Why wasn’t I coming? I rubbed hard and fast, consumed with need, trembling with yearning. I was so damn horny that I kept thinking I was tipping over the brink, ready to climax, but then the desperation would grow tighter and tighter until the nearing orgasm was like an orgasm in itself.

“I have what you want,” he said, as he brushed aside my hair, clearing the skin on the side of my neck. I felt his cool breath on my skin as he bent over me, his lips so close to my aching skin. There, covered in the soft light he gave off, I felt his fangs drop, no longer hidden, as he bit right into me, moaning as he did, his lips so cold that they felt frozen. For a moment, I felt just a pinch of pain, and then, suddenly, I was seized by an ecstasy deeper than I’d ever known. My cunt seemed to cry out and I could hear blissed-out screaming. It took me a few moments to realize I was the one who was screaming, overcome by such glorious power as he drank my blood that my pussy was surging again and again in a series of orgasms that were beyond human. He was so carnal that he was groaning at full volume, drinking me as a predator, his hands on my shoulders, controlling me hard. He was a fierce and hungry beast that was no longer tethered. I felt filled with his light as I climaxed with my whole body, my fingers plunging up my ecstatic cunt as I came and came and came. Oceans of pleasure billowed inside me, hurling against not only my cunt, but my clit, my nipples, my neck, my throat.

At one point, I felt him reach for his cock and start to jerk off with a single hand. I yelled, “God, brother!” And that made me come even harder, because this really was my brother—my stepbrother with his greedy fangs and his long groans of pleasure that I could only echo. He fucked my flesh with those teeth, warm blood running down my shoulder onto my chest, his right hand pleasuring his cock, while his left hand grasped my breast through my T-shirt. At last, he gave an almighty groan and sank his teeth in hard, as if he was in the delicious throes of a blood-sucking climax. Only later would I find that he’d come all over my T-shirt, covering the swell of my breasts with streaks of his own come.