Hi! I’m J.A. Rock, and right now I’m touring the internet talking about my latest release, 24/7—Book 4 in The Subs Club series. Thanks so much to the blogs that are hosting me on this tour, and be sure to leave comments on the tour posts for a chance to win a $15 Riptide Publishing gift card! 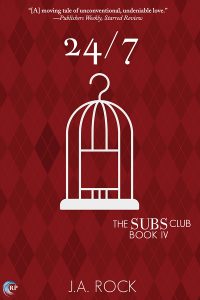 We started the Subs Club to make the kink community safer for subs. Except now the others are so busy chasing their happy endings, it’s like they’ve forgotten what Bill did to Hal and the fact that he got away with it. They used to think I was betraying Hal’s memory by hooking up with the owners of the club where he died. Now they don’t seem to care about any of it anymore.

Maybe I am sometimes angry with GK and Kel for giving Bill a second chance, but they’ve been mentoring me for a year now, and whatever else they’ve done, they make me feel incredibly safe. So I want to try something: I want to offer them my complete submission, 24/7. To serve the people who forgave Bill. That’s the way I want to hurt.

Except I’m starting to care about them in a way I never meant to—and I think they feel the same way. But after Hal, I don’t know if I want to be in love again. Because what I really need, more than anything, is to see Bill brought to justice. Even if I have to do it myself. Even if it means losing GK and Kel.

J.A. Rock is the author of queer romance and suspense novels, including By His Rules, Take the Long Way Home, and, with Lisa Henry, The Good Boy and When All The World Sleeps. She holds an MFA in creative writing from the University of Alabama and a BA in theater from Case Western Reserve University. J.A. also writes queer fiction and essays under the name Jill Smith. Raised in Ohio and West Virginia, she now lives in Chicago with her dog, Professor Anne Studebaker.

J.A. Rock is giving away $15 in Riptide Publishing credit. Leave a comment to enter the contest. Entries close at midnight, Eastern time, on June 11, 2016. Contest is NOT restricted to U.S. entries. Thanks for following the tour, and don’t forget to leave your contact info!