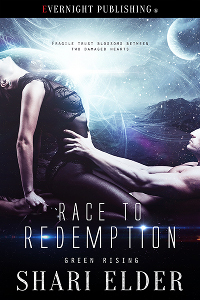 When thinking about this stuff, I use two general approaches.  First, I enhance the inherent potential in what we already do.   For example, in Race to Redemption, I created something called Iska feathers, which are believed to be the softest material in the galaxy. Humans and aliens alike sprinkle  them on bed or a partner the way we might use rose petals. Here’s a teaser from the book:

“Lips locked, he walked her back to the bed and coaxed her into a recline. Her long, low moan vibrated against his mouth as the Iska feathers touched her skin. The feathers were prized for their sensual properties. They felt like a whispered silk caress along the skin. A bedful acted as a teasing massage.”

The feathers are also woven into whips, ropes, panties, and I’m sure you can add to the list. In this universe, the whips and ropes are so soft they tickle, stroke—they are not pain related.  There is nothing new here but it does switch things around, hopefully adding freshness to standard fare.

A futuristic example in the book is a pair of fur-lined handcuffs with a DNA locking mechanism. Not really a technological stretch in modern society, but it gives someone an interesting level of control in the bedroom (or kitchen, living room, flyer) don’t you think?

The second approach I use to invent new sex toys is to imagine something that would be cool to have or do that is currently impossible.  In Race to Redemption, I concocted a pleasure port in what is now deleted scene. The port is soft, pliant cord long enough to wrap around both bodies, which connects the pleasure centers of the brains of a couple making love.  While connected, they both learn what each other likes and their delight is doubled.  They feel the other’s pleasure as part of their own experience. While the port does not appear in this book, it will appear in the second book in the series, now in production—The Scent of Memory.

So, if you were building a future or a sexy new alien world, what sex toys could you see creating? 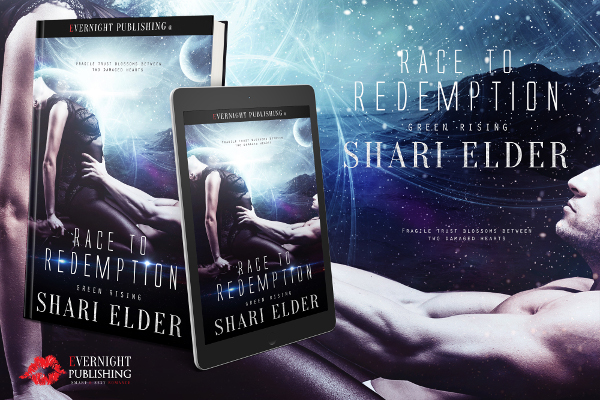 A woman who lost everything.

Intergalactic storm racing champion Elaina Carteret had it all – fame, wealth, men – until a horrific accident took it away. To get it back, she agrees to pose as Lainie Carter, medical transport pilot and corporate spy. Her risk-taking attitude infuriates Dr. Erik Johansen, who runs the outpost with an iron hand, a permanent scowl and the tightest bod on the planet.

A man desperate for redemption.

Unable to forgive himself for a past tragedy, Erik works himself into an early grave. He has no patience for the insubordinate Lainie Carter, who can’t take an order, disrupts routine and flames his body to ash.

A planet at risk.

When the outpost is attached, they’re thrown together in a race across the desert to stop a deadly biogenetic weapon As a fragile trust blossoms between two damaged hearts, their pasts resurface and threaten their growing bond.

Hello, I’m Shari. By day, I crawl out of bed, mainline coffee, walk the dog, get my kid off to school, hop on the metro, and save cities within the four walls of my office. Usually by email.

At night, the other Shari emerges.  I take off the suit, curl up on the couch and let my imagination play, with words and images until stories take shape (while periodically checking on my teen-ager, hiding out in the bedroom and plotting world domination).  As my alter ego, I save cities in a cape and spangled tights, wander space and time on a surfboard, fly over the Himalayas on feathered wings, make six-toed footprints in indigo talc snow on the sixth planet in the Andromeda galaxy or eavesdrop on Olympian gods while pretending to whip up a bowl of ambrosia.

In all these wondrous worlds, romance and passion blossom. I can’t resist a happy ending. And I am particularly prone to writing happy endings for those who have given up on ever getting one. That gives me immense satisfaction.

Join me on my journey. The best ideas emerge from team work.