You are here: Home / Guest Blogs / Balancing Life and Writing – A Guest Post by Jayce Carter

Instead of that, I usually roll out of bed at five in the morning since that’s the only time I don’t have kids yelling about needing toilet paper. Rather than that artisan espresso, I make a quick cup of coffee that I choke down when it is still way too hot because I need the caffeine to power me through a few hours of staring at my laptop and cursing the story for not writing itself.

The truth is that for most of us, writing isn’t the peaceful, solitary action we wish it were. There aren’t many writers who can devote all their time to their craft, which means most of us have to fit writing into an already overstuffed schedule.

What does this look like? It depends on the person. For me, it has meant waking up early to work in the hours before other things can distract me. It also has had me writing steamy scenes while I sat in a waiting room or rushing out a line or two on my phone while hoping no one looks over my shoulder because the mom’s at PTA will not let me come anymore if they do.

The fact is that no matter how much I wanted to be some modern-day Earnest Hemmingway—with more graphic sex, of course—writing diligently and able to throw myself into my work every hour of the day, it just isn’t realistic.

My real life is balancing two school-aged children, a needy husband, a dog who has to be hand-fed, the running of a household, and everything else expected of me. This means I have to juggle those priorities, and anyone who claims they don’t fall by the wayside now and then is a liar.

There are days when I scrape out my bare-minimum writing goal between burning dinner and trying to teach my kids fractions, and there are nights where my kids eat peanut butter and jelly sandwiches because I have a deadline and they’re old enough to fend for themselves, and some nights where I work on a weekend to catch up because my daughter and I needed a Doctor Who marathon.

In the end, balancing writing and life is about realizing that things will come up. Someone will get food poisoning, a file will get lost, and every time you sit down to work, someone will decide they need to have a conversation with you.

Finding balance is about recognizing these truths and learning to roll with it. You aren’t the first person to jot down racy plot ideas while at coffee with the principal and you won’t be the last.

“Are you telling me you’re a poltergeist?” I asked.

Hunter chuckled as he shifted his hand so he could stroke the inside of my wrist. The touch was innocent—he wasn’t rubbing anything intimate—and yet I could feel it rush through me as if his fingers were between my thighs. “What do you think?”

“I’ve never seen a poltergeist act like you.” I frowned as I tried to make my brain work despite how he crowded me and made me want to press against him. “And you weren’t able to enter my house without my invitation. Plus my secretary could see you, so no.”

He traced my bottom lip with the tip of his warm tongue, and I tasted flames. “You don’t invite poltergeists into your bed?”

“You did, just not with words.”

His lips curled into a grin before he bit down softly on my bottom lip, a sting of pain that made me arch up, that made me press my pelvis to him in a blatant and desperate offer. So, he wasn’t wrong.

I did want him, more than I might have ever wanted anything else. 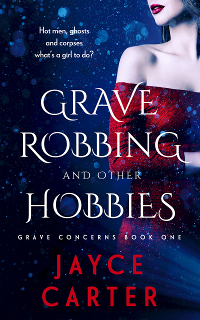 Abandoned at three—whose parents want a kid who sees ghosts?—I learned the world is quick to punish misfits. I try my best to be a normal, boring human, but the call of the supernatural just won’t be ignored.

When a stranger shows up on my doorstep in the middle of the night, it’s no sexy tryst. Instead, I’m off to the graveyard, digging up the corpse of a murder victim at the demand of the local vampire coven—and that small felony is just the start.

The spirit of the woman has gone missing, something that shouldn’t be possible, and everyone is looking to me for answers. There’s Kase, a vampire who’s both terrifying and secretive. Grant, a mage with a bad attitude and a lot of power. Troy, the possessive werewolf-detective next door and Hunter, a mysterious bad boy who isn’t even close to human.

It’s a race not just against time but against everything to figure out where the spirits are going, who’s behind it and if I can trust the men who now share my bed.

And all because of a little grave robbing…

Jayce Carter lives in Southern California with her husband and two spawns. She originally wanted to take over the world but realized that would require wearing pants. This led her to choosing writing, a completely pants-free occupation. She has a fear of heights yet rock climbs for fun and enjoys making up excuses for not going out and socializing.