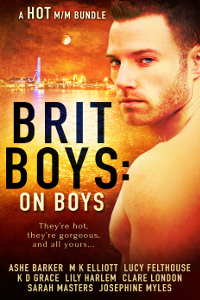 Well, by this point my dirty little mind was turning and I knew I had the setting for my story in Brit Boys: On Boys. I love writing m/m in all-male dominated situations, and what could be more male dominated than the Marine Commando School? My favourite part of m/m erotica is the power play between two strong, testosterone filled men. With m/f, there’s is almost always a naturally softer, gentler part of the couple. This doesn’t necessarily exist in m/m, and I love that both men in my story, Will and Brandon, are both tough and physically strong. Even though there is a chain of command in the Marine school, it doesn’t stop the recruit from battling against the man who is both his Drill Instructor and his lover.

Here’s a quick excerpt from Breaking the Marine to whet your appetite!

Will stood in the entrance of the showers, holding Brandon’s towel. “What do you think you’re doing, Recruit Rosen?” he said softly. “Do you know what time it is?”

Will stepped deeper into the room, closing the gap between them. Brandon was only too aware that Will still held his towel, and that he was standing completely naked, with water dripping down his legs and torso. It wasn’t as if Will hadn’t seen him naked before. After all, they were made to stand naked in front of the drill instructor every night. But this time there was no one else in the room. It was just the two of them again.

“An accident, huh? Don’t you know how to control yourself, Recruit Rosen?”

“You guess not? Is that a proper answer? I want a yes or no.” Will’s blue gaze drilled into him, and he felt the stirring in his groin again. Oh God, no. He needed to get a hold on himself. He couldn’t stand here with a full-blown erection in front of Will.

“No, Corporal,” Brandon said in the most direct voice he could manage without shouting. He didn’t want anyone else to hear something, and come and investigate. “I don’t know how to control myself, Corporal.”

Will took another step closer.

More blood rushed to Brandon’s cock, and he squeezed his eyes shut, trying to put the thoughts of how naked he was and Will’s proximity out of his head. But when he opened his eyes again, he found Will had moved even closer, and the other man’s gaze was travelling down Brandon’s body and had alighted on his rapidly hardening shaft.

“That’s right, Recruit Rosen. It doesn’t look like you can control yourself, does it?”

Will dropped Brandon’s towel to the floor and reached out, his hand circling Brandon’s cock. Involuntarily, he let out a groan. Will squeezed, and instantly Brandon’s erection was rock hard.

Will began to pump, slowly at first, but then picking up speed. “You disobeyed the rules, Recruit Rosen. You need to be punished.”

Will leaned in closer and spoke in his ear. “Turn around.”

He let go of Brandon’s cock long enough to allow him to do as he was told. He faced the tiled wall, still wet. A shove in the back from Will pushed him forward until he was only inches from the wall. His erection nudged the cold tiles, the head swollen and almost purple in colour. The cold sent a little shock through him, making his balls tighten into his body.

“Spread your feet apart and lean forward, so your forearms are on the wall.”

Brandon became aware of Will’s other hand smoothing down his back, getting lower until it reached the top of his buttocks. With a single finger, Will parted the top of Brandon’s arse cheeks and ran his finger down the crease until he met with the tight pucker of his anus. Brandon froze, his breath held in anticipation, his body tense with excitement. The hand removed, and he heard the click of a cap before cold gel slipped down the crack of his arse. He jerked at the contact, lifting his head up again.

What the fuck? He keeps lube in his gear? Who the hell was this guy? But Brandon was too far gone to question it. He needed Will to make him come more than anything else he’d ever needed. 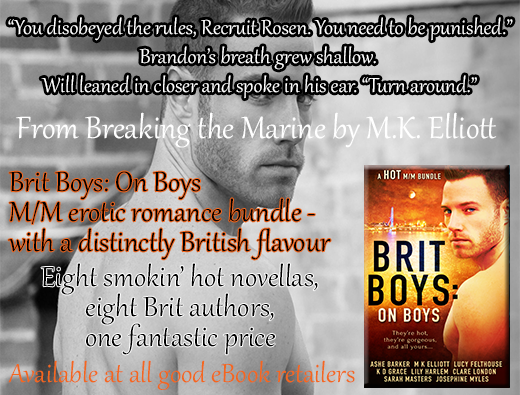 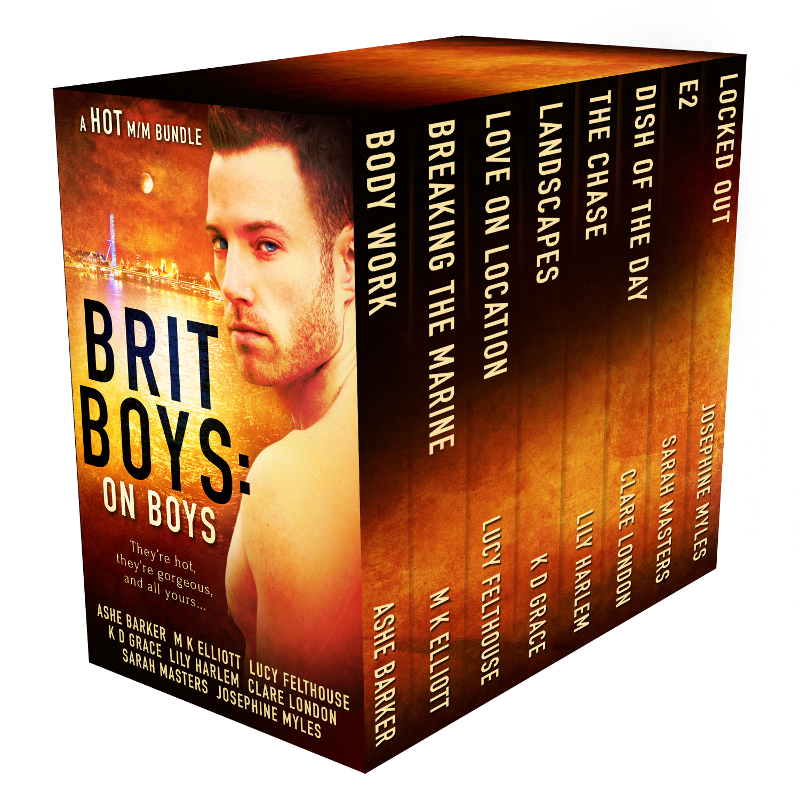 From east to west and north to south, these British boys are having a blast in and out of the bedroom with the men of their dreams. They’re topping and bottoming from London to Cardiff, living out fantasies in the wildest fells and hooking up while serving HRH Queen Elizabeth II.

With passion and lust the name of the game, nothing is off limits. Throw in honed muscles, high-strength testosterone and an accent to die for and there is nothing they can’t do and no one they can’t get in this world or another.

Alex is doing okay. His body repair shop makes enough to live on, he has a decent apartment, life is fine. That all changes when he runs into Graham in a supermarket car park – literally. He offers to fix the damage to Graham’s car free of charge. The sparks soon fly, and the heat between them has nothing to do with welding equipment.

Brandon Rosen hadn’t planned for his final night before enrolling in the Royal Marines to involve a hot stranger and a pub car park. And he certainly hadn’t planned for that same hot stranger to turn up at the barracks in the form of his Drill Instructor, Corporal Will Stewart. In the testosterone fuelled environment of the training camp, can Brandon and Will overcome past pains and face up to what they really want? Or will the Royal Marine Commando School break their relationship before it even gets started?

When Theo Samuels heads off to film on location in the village of Stoneydale, he’s expecting drama to take place on camera, not off. But when he meets gorgeous local lad, Eddie Henderson, he struggles to ignore his attraction. A relationship between the two of them would be utterly impractical, yet they’re drawn together nonetheless. Can they overcome the seemingly endless hurdles between them? Or is their fling destined to remain as just that?

Alonso Darlington has a disturbing method of keeping landscaper, Reese Chambers, both safe from and oblivious to his dangerous lust for the man. But Reese isn’t easy to keep secrets from, and Alonso wants way more than to admire the man from afar. Can he risk a real relationship without risking Reese’s life?

Dish of the Day

Richie’s sunk all his hopes and savings into a new restaurant in south London promoting British ingredients and recipes. His best friends Craig and Ben should be around to help him celebrate the grand opening, but it looks like it’s all heading for disaster – until his friends step in to tell him some home truths. Then they’ll help him relax and enjoy their loving, intimate menu instead.

When Archie meets Dan after The Change, he realises there is no such thing as a random meeting of soul mates, it’s all mapped out in the stars. Now all he’s got to do is hope those orbiting planets stay in alignment and true love finds him again.

Getting accidentally locked out of his hotel room on Valentine’s Day night is embarrassing enough for teacher Martin Cooper, but the fact he’s stark naked makes it even worse. It doesn’t help that the one person he runs into is Rod, the gorgeous man he’d been checking out earlier in the hotel pool. But when Rod offers Martin a refuge, the night heats up. Now if only Martin could get the hang of this seduction business…

M.K. Elliott is the author of the bestselling short story collection, ‘Rescued.’ A British author, she was born in Devon, England, where she now lives with her husband, three young daughters, two rescue cats, and a crazy Spanish dog. Though she has a degree in Zoology, her true love has always been writing and she now works as a full time author. As well as erotica, she also writes paranormal fiction in the name Marissa Farrar, and has recently published her fourteenth novel.

M.K. writes everything from contemporary romance to steaming hot erotica, and her love of travel and adventure is her main influence in her stories.