He took Ligeia’s arm when it was time for them to move to the dining hall. They’d make their way to a ballroom for dancing afterward. The dining room was lit with a blaze of glass chandeliers and sconces, and each of the tables was set with crystal and silver that sparkled and reflected the light. More flowers decorated this room in large centerpieces on the tables and in swags hanging on the walls. Bastien wondered if they’d used every hothouse flower in the city. The effect was undeniably stunning.

He pulled out her chair, seating her at the table, and then took a seat next to her. She wasn’t often or easily moved by the pretty and the frivolous, but he wasn’t surprised she was today. Something about Etan and Tristan’s wedding day was a bit magical, pulling everyone into the glow of happiness that seemed to encompass the couple.

Etan and Tristan didn’t stop smiling once through the many courses of the long dinner. They sat with Philip and Amory, along with Cathal and Flavian, Maxen, and Elodie. Tristan’s laughter rang out, clear as a bell, over the hum of conversation and thequiet music played by the musicians, an utterly carefree expression of joy. People drifted over to them in the breaks between courses, less it seemed for the princes’ attention than to convey well wishes to Etan and Tristan, and perhaps to bask in that joy for a few moments, as if it might transfer itself to them.

Bastien wondered himself, felt that pull.

He frowned as he watched Griffen chatting with Etan and Tristan. Griffen was smiling too, but something was off. He said as much to Ligeia.

She glanced at Griffen and then back to Bastien, her brow furrowed. “I think he’s feeling a bit…wistful.”

She shrugged. “Yes. Two of his good friends just married each other. They love each other and are quite plainly deliriously happy. I think he’s a bit sad that he doesn’t have that.”

Surprise stole Bastien’s voice for a moment. “Griffen? You don’t know all he gets up to. I don’t think he’s ever going to settle down.”

“I know more than you think,” she said with a half smile. “And I don’t think you should be so quick to judge Griffen.”

“I’m not judging, nor am I being quick about anything,” he protested. Bastien knew Griffen, his laid-back attitude and his casual affairs.

“Hmm. I don’t think you know Griffen as well as you think you do.” Ligeia turned to Mathis then, leaning over Griffen’s empty chair to talk to him.

Left with her words echoing in his head, Bastien absorbed himself in watching the room. He knew his own brother; he knew Griffen’s behavior. He’d often wished Griffen would calm down, and he’d tried to guide him after their father’s death, tried to keep him from falling into trouble. Bastien stifled a sigh and focused on the rest of the diners. The long tables were full of people, some he recognized and some he didn’t.

Etan’s mother, sisters, and other brother Vrai were at a table across from Bastien’s and near to where Etan sat with the princes. Isaline’s husband sat with them as well; Bastien hadn’t attended the wedding of Etan’s eldest sister a few years ago, but he knew the man from his own days at university. The other people seated near them came as something of a surprise. If he wasn’t mistaken, they were Philip’s aunt Edine, the younger of his father’s two sisters, and her three sons, all younger than Bastien. He couldn’t remember how many girls had followed the sons, and he didn’t see them, nor Princess Edine’s husband. He’d been appointed Tournai’s ambassador to the kingdom of Teilo many years ago, though some still thought Philip’s aunt had married beneath herself as he wasn’t of royal blood. Bastien was a bit surprised they’d made the long trip for the wedding, especially with colder weather setting in the north.

Philip’s other aunt, the older of his father’s two sisters, and her family weren’t present, but Bastien would have been shocked to see her. She’d married into the royal family of Elleri, the kingdom on their eastern border, and had only returned with her husband and family for Philip’s wedding, as far as Bastien knew. But that had been more a state visit, in which she and her husband had represented Elleri, than a family visit. The wedding of a younger nephew not in direct line to the throne wouldn’t warrant such a visit.

As Ligeia continued her conversation with Mathis, Bastien let his gaze wander over those he didn’t recognize. He assumed some were Tristan’s friends and family—a few he picked out as potential siblings because of the strong resemblance—but Tristan came from a merchant family, so Bastien wouldn’t have met any of them previously. Some of the other faces Bastien didn’t recognize were probably Etan’s friends from the university. Etan was a scholar at heart and still remained devoted to his studies and work there, lecturing at the university when he could.

He let his gaze pass over the crowd, not really focusing on anyone in particular. Until he was arrested by a pair of intense violet eyes. Bastien’s breath caught in his throat, and for a moment he couldn’t look away. 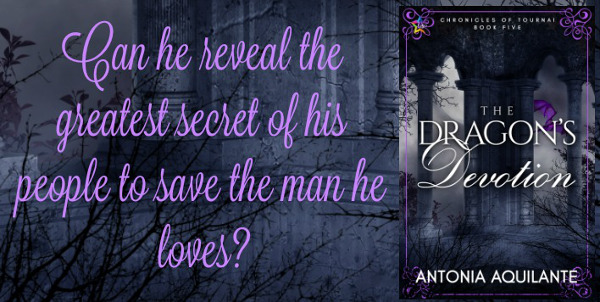 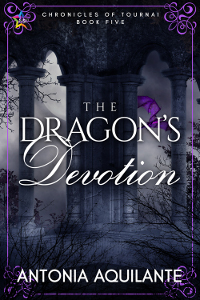 Corentin is a scholar with a secret—his magical Talent allows him to turn into a dragon, and he isn’t alone in that ability. Long ago, dragons were hunted fiercely, until they went into hiding, becoming things of legend. Corentin has traveled the world with one aim—to protect his people and keep their secret safe. Drawn to the principality of Tournai by news of someone close to discovering that secret, he hopes to avert suspicion. His attraction to the too-serious Bastien isn’t convenient for his purpose, but it isn’t something he can ignore either.

Lord Bastien, Earl of Ardesia, inherited his title unexpectedly when his parents were killed in a sailing accident along with the parents of his cousin, Prince Philip. Since then, Bastien has devoted his life to the obligations of his family and estate—so much so, that it has caused tension between him and his siblings. His world is further shaken when he receives an anonymous letter informing him that the tragic boating accident may, in fact, have been murder. Bastien throws himself into investigating whether the allegations are true and finding out who killed his parents.

As Corentin and Bastien become closer, the mystery of Bastien’s parents’ death draws him further into danger. Corentin feels compelled to protect Bastien, but the threat is closer than they know. Now, Corentin must decide whether preserving his secret—and potentially his people’s safety—is more important than saving the man he loves.

Antonia Aquilante has been making up stories for as long as she can remember, and at the age of twelve, decided she would be a writer when she grew up. After many years and a few career detours, she has returned to that original plan. Her stories have changed over the years, but one thing has remained consistent—they all end in happily ever after.

She has a fondness for travel (and a long list of places she wants to visit and revisit), taking photos, family history, fabulous shoes, baking treats (which she shares with friends and family), and of course, reading. She usually has at least two books started at once and never goes anywhere without her Kindle. Though she is a convert to e-books, she still loves paper books the best, and there are a couple thousand of them residing in her home with her.

Born and raised in New Jersey, Antonia is living there again after years in Washington, DC and North Carolina for school and work. She enjoys being back in the Garden State but admits to being tempted every so often to run away from home and live in Italy.

9/4       On Top Down Under Book Reviews    http://ontopdownunderbookreviews.com/

9/7       Stories That Make You Smile  https://authoraddisonalbright.com