Heather’s Big Bang – or How She Plans a Series

When it comes to planning a series there are lots of ways to do it—charts, timelines, character maps, spreadsheets, and storyboards and then there’s the write it and if it sticks in my brain, it stays in the book. Neither is really ideal for me.  So how do I write a series?

With a Big Bang

At some point, I had a question or a character or a kernel of an idea and pretty much every series becomes an extension of that with characters introducing me to new ones, and growing it organically.

But where do I start? Do I create the world first? Or do I come up with the story idea?  To be honest, there is no one right answer to that question. I have come up with story ideas before that made me consider the world around that character and I’ve wanted to write characters or a story set in a world I imagined.  In fact, yesterday I wrote out a proposal for a multi-book series that began with a typo in an instant message. Seriously!

·         The Chance Monroe series began with the character Chance. I knew she was a Hedge Witch, bound to the land and her magic was very specific. The world I constructed around her reflected that initial idea.

·         The Fevered Hearts series began with the desire to write a paranormal in a world without technology, cars, high speed communications and a sense of isolation. I chose the Old West and reached back into Texas in the 1850s to fulfill that idea.

·         My Marine series relies on the premise of Mike’s Place—a fictional rehabilitation facility that doubles as a backdrop and a central meeting point for so many of my characters, but again this began with the story of Luke and Rebecca in Once Her Man, Always Her Man and grew from there.

So there is no one right way to world build and no one sure fire way to make your world “perfect.” I like to construct a world around a central idea—the spark, if you will, of inspiration. For an author, that spark serves as our big bang.

My methods are a mash-up. I know the hard rules of my world, but I also leave myself room for organic growth (which can be problematic when a character you didn’t know had powers suddenly demonstrates them or a hero you thought was perfectly fine conceals his PTSD and spins everything you thought in a different direction—problematic, but fun.).

Creating a series is a lot like building a personal profile or in this case, a forensic one, of the elements in that world. You have to ask yourself some basic questions: Who? What? When? Where? Why? How?  As authors, we’re forever asking this kind of question about our characters, their families, our plots, our storylines—so of course, we have to ask them about the world we’re building.  But there’s a bigger question that gets asked—and we ask it all the time:

At the root of all speculative fiction whether it is hard-core science fiction, space opera, urban fantasy, horror, mystery, paranormal romance, pure fantasy or romance, the question that starts it all, is what if?

What if Death were a woman? (Neil Gaiman)

What if a vampire hunter fell in love with a vampire? (Joss Whedon)

What if a young man gained extraordinary powers? (Stan Lee)

What if the world united under a flag of peace and sought to explore the stars? (Gene Roddenberry)

See, these very simple “what if” questions become the essential building blocks of your world. Imagine, if you will a table full of bins. In each of the bins are legos. They come in all shapes, colors and sizes. You can put them together in an infinite variety of configurations. Where do you start?

What if supernatural gifts were real and could be harnessed for law enforcement? (Kay Hooper)

This question then engenders the next question.

How do you test for the powers?

How accepted are they?

Are there laws governing their use?

See? Each question can spawn another and another. In Babylon 5, J. Michael Straczynski revealed the terrifying layers behind the Psi Corps. Telepathic and telekinetic humans scared others, but even among their own kind there was a divide—between those who wanted to blend in and those who wanted power. The Psi Corps were mother and they were father, children were taken from their parents and raised in the corp, they were isolated, forever where gloves, forbidden casual touch, and limited to the laws of their kind—it was terrifying and brilliant and rooted in a rich history of humanity.

And it all began with a what if question?

So when it comes to my series—they all begin as a what if question and as I answer those questions, I do have to keep a running checklist usually about the characters themselves so I don’t accidentally change their eye color or their back story or some other key feature.

At the end of the day, I write these series because I need to find the answers to those questions, too! The problem is, answers usually come with new questions and darnit! That usually means more books. 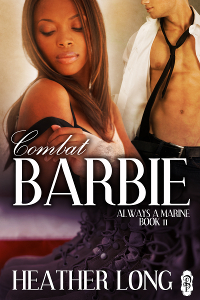 The words haunted Mary Phillips from childhood on. Her mother’s love of beauty pageants included dressing her up like her own personal Barbie doll. She was the face of baby food, the darling of surfing commercials, and the exotic stunner who walked away with the Miss California title at eighteen, but she traded in her tiara and a lucrative modeling contract for combat boots and life as a Marine. She’s lost good friends to IEDs and sent home more walking wounded than she cares to admit, but this Marine wouldn’t trade her assignment for all the Manolo Blahniks in the world.

You’re such a nerd…

Kyle Stewart heard every variation on a theme as he went through school: nerd, geek, four-eyes, weirdo—and he rolled with it. He could count on one hand the number of girls who ever deigned to talk to him about something other than tutoring. But he had the last laugh, the only self-made millionaire in his graduating class. His start up software company went huge and his private ownership netted him two hundred million dollars at sale.

Despite the invitations, Mary didn’t plan to attend the ten year reunion. The last thing she wanted to hear was—”you could have been so much, what happened?”  But running into Kyle at the local coffee shop reminded her that not everyone judged by appearance. Kyle once swore to rub his former tormentors noses in his success, but when the reunion rolled around, he was reluctant. A chance meeting with the best looking girl he never could get the courage up to ask out on a date and he dares the request.

Can one night change the nerd and his combat Barbie’s lives?