Sometimes I wonder how I ended up writing erotica.

Mind you, I’d been reading it for years, but my writing never involved the horizontal (or vertical, or diagonal) mambo. My writing used to be more like, I guess you could say, ‘contemporary’ literature. I wanted to be the next Salinger or Fitzgerald. I wanted to be the voice of my generation.

I think the change began when I started writing book reviews and came across several published by Cleis Press. Its anthologies tend to include some very well-written stories and for the first time I began to see erotica not as a guilty pleasure, but as actual literature.

I see no difference between a short story by Vonnegut and a story written by Anna Watson. Or Kiki DeLovely. Or about a dozen other writers whose work I have come to greatly admire. Their stories are much more than ‘one-handed reads’ – although they do tend to be that as well – they are really good stories.

And once I realized that you could write about sex and write about other, deeper stuff at the same time, I decided to go for it. I had written a lesbian erotica story as an exercise in my writer’s group years before and I really enjoyed it, so I knew that I could do it.

By the time I submitted “Undercover” I had already been published in several newspapers, but fiction – fiction is so much more personal than journalism. It is you. When you submit a story for an editor’s consideration, you lay yourself bare. It’s kind of like going out on a first date and then waiting for them to call or text or Facebook or @mention you on Twitter the next day and it is excruciating. Sacchi will always hold a special place in my heart because she was my first and you never forget your first.

Of course, it gets easier with each submission, each rejection, and each acceptance – at least for me – I don’t speak for other writers. I can still remember opening Sacchi’s email and a huge grin (and maybe some tears) spreading across my face. My second was special too, but I think it was because my story “Come to Me” was accepted for Best Lesbian Erotica 2012 and that’s kind of like getting asked to the prom by the captain of the football team.

I feel honored and blessed to be able to do what I do for a living, although at times I still wonder how my name appears in the same table of contents with Delilah Devlin, D.L. King, Sinclair Sexsmith, Cheyenne Blue, and Allison Wonderland.

Some writers astonish me with their brilliance.

Regardless of what brought me here, I’m glad I am here. I have excellent company. 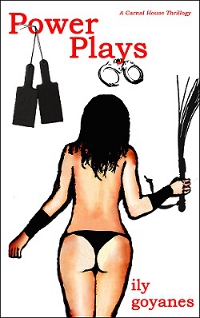 This is an excerpt from “Fun & Games,” one of the stories in Power Plays. I hope you like reading it as much as I enjoyed writing it.

The leather belt lands on my bare ass with a loud smacking sound. I bite down hard on the towel for a second, preparing for the next blow. Twenty, thirty, hell, even forty or fifty blows could connect with my flesh without arousing the slightest reaction from me, but this is a spanking party and my ass is a rental. You know how people treat rentals, right? Let’s just say my ass had already been ridden for way over two hundred miles.

I had lost count of the spankings around that number and I know that was at least ninety minutes ago. My ass is costing the host two hundred and fifty dollars an hour of which I got to keep two hundred. My agent/manager/boyfriend keeps the remaining fifty.

Jacob just invests the money right back into my career, so he isn’t really making any money off of my talent. What with marketing and advertising, membership fees for several professional agencies and the almost thousand dollars or so a month that I spend on my hair, nails, facials, waxing and teeth whitening, I was very glad that he had kept his day job as a high-priced criminal attorney.

We don’t need the money—that’s the thing. I was bent over a wooden stool in some real estate agent’s kitchen having my ass beaten by a roster of about twenty or so guys, just for shits and giggles.

When I get home, by limo mind you—that’s part of the deal—Jacob is in bed with an open book on his lap and an open bottle of red wine on the night stand. He looks up and over his reading glasses and smiles, his dark green eyes shining. I take in his lean, muscular, shirtless body and squeeze my legs together.

“Hi honey,” he says, his deep voice causing a shiver to travel hurriedly down my spine–all the way to my cherry red ass. He casually runs his hands through his chestnut colored hair as if I had just gotten home from picking up some milk and bread from the grocery store.

I crawl into to the bed next to him; take the book out of his lap, and rest my head on his crotch. “Hi baby,” I purr, snuggling up against him and inhaling his soapy scent.

I feel his long, lean fingers running through my hair and I shut my eyes, enjoying the moment. Jacob knows I need about two minutes of quiet whenever I get home from being rented out. Just one hundred and twenty seconds of silence to bask in the liberating feeling of having been someone’s ‘entertainment.’

I can feel my pussy contracting and I know I am soaked. My pussy has been aching for attention since the first blow landed on my ass about three hours ago. I need to fuck.

Jacob senses the shift in my mood and lifts my head, arranging our bodies so that we are lying next to each other, the length of our bodies parallel, our faces almost touching. I close my eyes again and breathe him in.

“Minty fresh,” I whisper into his ear, undoing my corset and pulling it off my dulce de lechecolored shoulders.

Jacob just nods and reaches down with his powerful hands to my black panties, which he then pulls down over my wide hips, finally removing them completely.

“Are you wet?” he asks in a low voice, eager to hear about my adventure, excited to listen to tales of other men, many men, disciplining his girl.

I feel his cock against my thigh and it is solid. All nine glorious inches are poking into my pliant flesh. For a second it occurs to me that Jacob’s magnificent cock is also his microphone, a listening device ready and able to record my performance.

He sees my smile and searches my dark brown eyes. “What’s so funny, linda?” he asks.

I love when he speaks in my native tongue. His endearing, more-American-than-apple-pie accent makes the familiar words sound fresh to me.

“Nada,” I reply and kiss his neck, tracing that one sweet vein with my tongue, knowing that I have his undivided attention.

His body trembles as if he just saw a ghost—or came—or tasted the most delicious ice cream in the universe. I reach down and cup his heavy nuts, rolling them gently in my hand, massaging and caressing the most quintessential feature of my boyfriend’s masculinity.

He groans softly, reaching for my breasts, grabbing them, kneading them in his large hands. A moan escapes my pouty, painted red lips and I tug sharply—just once—on his balls.

He shivers. “Did you like it?” he asks, his voice thick, and I can already tell that he is right there with me, heady, lost, gone.

“Yes,” I breathe into his ear, wrapping my hand around his fat prick and stroking it ever-so-slowly. “There were over twenty of them. Real estate broker-bank manager types, in chinos and polos. They started out with their hands, but that only lasted for a short while before one of them took off his belt.”