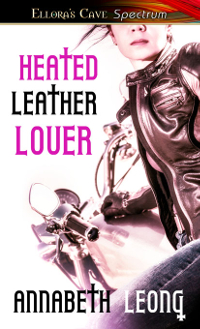 I was out shopping with a friend recently, and she pointed to an armchair the store had displayed. “Is that real leather?”

I darted out a finger to brush the surface, and right away I knew the chair was faux. It wasn’t about scientific knowledge—I could tell by the lack of response from my body. When I touch leather—or, God help me, when I smell it—every nerve I’ve got jumps to instant alert. If I press my face against leather or chew on it, I don’t need foreplay.

The fetish extends from there. Not only do I go weak in the knees for a woman in leather, I love to put it on myself. My most prized possession is a leather dress that laces up the front, and I’m also crazy for leather shoes. As far as kink, is there any substitute for a leather paddle?

Heated Leather Lover, the book I wrote for Ellora’s Cave’s Hot Pink series, was really an act of indulgence. It’s wall-to-wall full of stuff that makes me melt. Yasmin has a serious leather fetish, and her relationship with the motorcycle-riding, leatherclad Tam gives her a chance to play that out to the fullest. When I read over it now, what I see most clearly is my conviction. I’m right there with Yasmin, soaking up the smells, at the mercy of all that hot leather.

“You keep asking me to fuck you, sweetheart. How am I supposed to do that when you’re still wearing all those clothes?”

“Oh.” Lust and understanding dawned over Yasmin’s face and she struggled out of her already disheveled outfit. She shrugged off her open shirt. One of her breasts had climbed up out of its bra cup during the spanking, the nipple hard and dark and perched just above the lace rim. Her hands trembled as she worked on the zipper of her skirt, and she almost fell over trying to step the rest of the way out of her tights.

Tam took pity on her and stood up to stabilize Yasmin instead of continuing to watch her delicious battle with her clothing. On the other hand, maybe Tam just couldn’t wait any longer to touch all that soft, inviting flesh. She pulled Yasmin against her and sucked on her earlobe while teasing her hard nipples. Yasmin gave up on trying to push her thong down her hips. Instead she sighed and melted into Tam’s embrace. “You smell like leather,” she said dreamily.

Tam grunted with satisfaction and growled in a low voice, “You like that, don’t you?”

When Tam Bouie rides into town on her motorcycle, she finds the welcoming committee of her dreams. In a bar called Issues, the beautiful femme Yasmin Miller seems to have been waiting for a butch on a steel horse to sweep her off her feet.

Yasmin has a serious fetish for women in leather and isn’t afraid to go after what she wants—until she discovers that Tam isn’t just passing through. Convinced that their town is too small for the explosive love affair that threatens to ignite, and the possible fallout if it goes sour, Yasmin drops Tam as quickly as she picked her up.

Tam, however, doesn’t give up easily, and Yasmin’s resolutions to stay away from her won’t mean a thing if she can’t resist the sexy butch’s heated leather love.

Check out the rafflecopter below for a chance to win a $5 gift card from Ellora’s Cave or a digital copy of Heated Leather Lover!