Hi! I’m J.A. Rock, and right now I’m touring the internet talking about my latest release Pain Slut—Book 2 in The Subs Club series. Thanks so much to the blogs that are hosting me on this tour, and be sure to leave comments on the tour posts for a chance to win your choice of two backlist ebooks and a $10 Amazon gift card!

Honestly, I’m ready to take a step back from the Subs Club. Making the kink world a safer place for subs is the sort of bandwagon I’d have boarded as an idealist in my early twenties, but now I’m a pragmatist in my late twenties. I prefer to focus on adopting and raising a child.

But unexpected factors inevitably derail my plans. Like Drix Seger—attractive and the first genuine sadist I’ve encountered. If I were not in the process of renouncing my masochistic ways and becoming the normal, responsible potential father the adoption agency wants to see, Drix and I might do well together. But he has a foolish name and belongs to a cult of vampyres, and I am quitting kink. So why does Drix’s infatuation with blood and biting make me so hot I can’t think straight? And why, when he looks at me, does he seem to see something beyond a basket case with a stick up my ass?

Can I start a new phase in my life without leaving part of myself behind? Please send help. 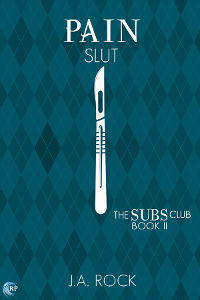 J.A. Rock is the author of queer romance and suspense novels, including BY HIS RULES, TAKE THE LONG WAY HOME, and, with Lisa Henry, THE GOOD BOY and WHEN ALL THE WORLD SLEEPS. She holds an MFA in creative writing from the University of Alabama and a BA in theater from Case Western Reserve University. J.A. also writes queer fiction and essays under the name Jill Smith. Raised in Ohio and West Virginia, she now lives in Chicago with her dog, Professor Anne Studebaker.

Leave a comment for a chance to win your choice of two backlist titles from J.A. Rock and a $10 Amazon gift card. Entries close at midnight, Eastern time, on February 6, 2016. Contest is NOT restricted to U.S. Entries. Thanks for following the tour, and don’t forget to leave your contact info!