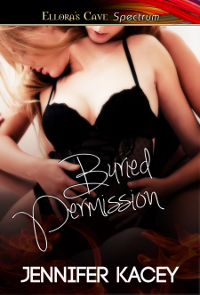 Last year Ellora’s Cave put out the notification that one of their open calls for 2014 was going to be *GASP* an FF line. I WAS ECSTATIC!!

Girls are yummy. Danielle and Kerrington in Buried Permission certainly are!

Love is yummy no matter what gender the participants are. I am a firm believer in this.

FF stories are actually kind of hard to come by, which I didn’t realize when I wrote FF into my first Members Only book Together In Cyn. I always thought it was delicious so I just expected it to be as prolific as MM, and that’s just not the case.

The MM genre has gained a lot of readership and I really hope that FF, and especially this HOT PINK line, will find the same readers who love and adore it.

Must say- I APPLAUD Ellora’s Cave for doing this! For focusing on something that is special and beautiful and just as wonderful as any MF book out there. Only difference? Two innies. *GRINS*

This story is special to me because it reaffirms that I can write what I’m passionate about and I’m lucky enough to work with a publisher who champions my work. So cool!

AND Buried Permission releases on Friday the 13th – this made me smile SOOOO big!

Hope you love it and give Kerrington and her best friend a chance to tell you NOTHING is more important than love.

Instead of looking put out by their tardiness, Dr. Mack smiled, pointing out two seats open in the front row before resuming her demonstration.

Kerrington opened her mouth, ready to tell Danielle she didn’t want to sit that close. Before she uttered a single word, her best friend grabbed her hand, linked their fingers, and then pulled her down the short set of stairs. She dragged her around chairs and small, round tables filled with people.

She followed silently, focusing on Danielle’s mocha flippy skirt. It bounced on every step she took with her platform heels. Kerrington started to sweat and glanced away nervously. She felt eyes watching them. It wasn’t the skirt she’d borrowed from Danielle that barely covered her ass that made her nervous, or being the center of attention in a room full of people. It was her best friend holding her hand…in public.

They could have been a couple, maybe even lovers.

Never had been, even though Danielle had made it clear, several times, they could be if Kerrington would just come out of the closet.

Kerrington cleared her throat as they settled into their seats, trying to shake off the memories of those late-night conversations they never spoke of in the light of day.

“Great seats,” Danielle exclaimed in as quiet a voice as she could muster.

Her breath brushed across Kerrington’s cheek and she tried not to react. But her eyes closed, her nipples beading beneath the thin top she wore. She thanked her lucky stars for wearing a push-up bra so her nipple rings didn’t show.

One more secret she hid from everybody.

She took a deep breath and held it, closing her eyes for a few seconds and wanting a cigarette in the worst of ways. She shook off the craving, trying desperately not to give in to wanting two things she shouldn’t.

On her exhale, she tuned into what the hypnotist said, instead of just how cute her black high-heels were.

She spoke directly to the people on stage. “Continue down your body, relaxing each muscle group. Let your hips relax, your thighs. The simple weight of your palms resting on top makes your legs feel very heavy. That heaviness travels down to your knees, along your lower leg.”

Kerrington caught the eye of Dr. Mack and a rush of awareness traveled up her spine, smacking her in the back of the skull.

Dr. Mack winked at her, never losing her place in the speech she’d obviously given before.

“Now that your entire body is relaxed and heavy I want you to focus on your breathing. Inhale… Exhale… Inhale… Exhale… Breathe in positive energy and then release all of your negative thoughts and feelings when you exhale.”

All of the people sitting on stage, three guys and two girls sat slumped in their chairs. Kerrington relaxed with them, following the suggestions of the hypnotist.

What could it hurt?

“As you close your eyes I need you to picture a favorite location. A vacation spot you went as a child. Maybe a room in your house you relax in, or even a spa you go to for a massage.”

Before the cerebral suggestion had been fully described,Kerrington pictured the sitting room at her grandmother’s house—

It was hers now, free and clear. Even after four years she still had a hard time remembering her signature resided on the title’s owner line.

“Take a deep breath for me and when you let it out I want you to picture a staircase. You can walk to the top or the bottom, whichever level you like best. I need you to grasp the handrail attached to the wall beside you. It might be metal or wooden. Feel it against your palm. Wrap your fingers around it.”

Kerrington smiled, feeling the rail in her hand. She stood at the top of the stairs leading down into her basement, as ifshe were going to get a load of laundry.

The warmth of her grandmother wrapped around her and she took another step down.

“Take another step, feeling your foot solidly press against the next stair. Your body is relaxed and safe here. When you’re ready, take two more steps, and—”

Kerrington’s arm slipped off the armrest, jolting her awake. Her eyes popped open and adrenaline spiked her heart rate.

“Sorry. Didn’t mean to nudge you so hard. Talk about feeling crammed.” Danielle shifted in her seat, crossing her legs, focused on the stage again.

Kerrington willed her pulse to slow, hyper-aware of how close she’d been to the bottom of her staircase. She would have been deep in trance.

Danielle patted her knee, squeezing it, her eyebrows slanted in a V of concern. “You okay?”

“Mmm hmm. Fine.” She was anything but fine.

Kerrington needed her best friend Danielle in her life. Secretly, she wasn’t just a need. She was an ache, buried so deep Kerrington couldn’t breathe without wanting her. But she’d promised her grandmother she’d make her proud and find a man to marry, to have children with, to love, to cherish…

Nothing else mattered more than following the straight and narrow path set before her. Until one night, when a simple kiss changed everything and put Danielle and Kerrington’s strained friendship into question.

Searching for answers, Kerrington finds the permission she thought lost forever—unearthed by hypnotherapist, Dr. Mackenzie Raith. Now Kerrington must convince Danielle to give her one last chance, if it’s not too late.

Here’s a list of the seven of us at EC that took up the mantle of spreading a bit of FF love during this awesome GLBT month!

In addition to all these releases, Ellora’s Cave will be putting its existing female/female titles on sale for a week each, so now’s a great time to pick up anything you might have missed! The full list of female/female titles can be found at  http://www.ellorascave.com/imprints/romantica/spectrum-1/themes/Female%20Female.html

The books in the Members Only Series can be found here… 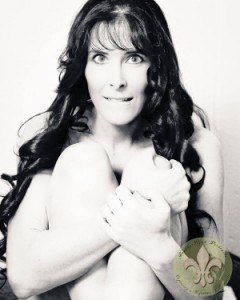 Jennifer Kacey is a wife, mother, and business owner living with her family in Texas. She sings in the shower, plays piano in her dreams, and has to have a different color of nail polish every week. The best advice she’s ever been given? Find the real you and never settle for anything less.