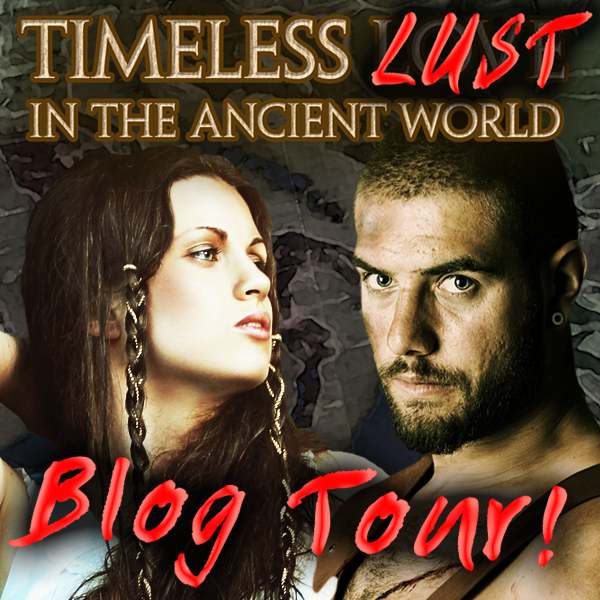 There have always been lusts that transcend limits. The rush of fire in the blood, the hunger for touch, the compulsion to bury oneself in the flesh of another. Ancient storytellers enraptured audiences with tales of love and lust, of the dangerous passions of gods and heroes and monstrous creatures, pursued sometimes to destruction.

These modern interpretations of those ancient themes span histories and cultures from Greece and Rome to Egypt and the Holy Lands, stories of love and betrayal, of vengeful gods and goddesses, and pleasurable peace. There is much more to a palace eunuch than meets the eye. One man must face his greatest sins, while another battles to save his lover’s life. A woman must balance appeasing her ethereal deity and her earthly desires, and another is imprisoned behind the bars of a gilded cage. 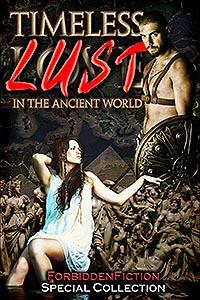 Eleven tales of intense lust in the ancient world crafted by ForbiddenFiction’s best authors, ready for you to peel back the cover and indulge your carnal appetites.

Keeper of the Bed Chamber by Jess Lea

The Nemesis Bird by Slave Nano

Never Before Touched by Cupid by Mina Kelly

The Snake and the Lyre by Annabeth Leong

Touched by Fire by Murin Piper

Find out more about the stories in Timeless Lust on the ForbiddenFiction web site http://forbiddenfiction.com/anthology/SPC-1.100015

Scherazade took up a golden jug and poured a goblet of wine out for King Shahryar.

“Tell me, my Queen, what tale do you have to entertain me tonight?” he asked.

“O King, if it pleaseth Allah, let me tell you the tale of the Caliph of Ishfahan, the slave girl Sofia-al-Din Hasan and the Nemesis Bird.”

“I trust, for your sake, it will be as captivating as your other stories, Scheherazade. Did you know that before I married you, I wedded a virgin every day and had them beheaded the next morning? I executed 1,000 virgins in this way as revenge on your sex because my first wife was unfaithful.”

Scherazade smiled. Of course, she had heard the tale. She was the daughter of the Sultan’s vizier, his most trusted adviser. How could she not know that? Yet she trusted in her ability to use her wits to bewitch the King with her beguiling tongue.

She had perused history and legend. She studied philosophy and the sciences, and she was well versed in the arts… including the erotic arts. She had a magnificent library of thousands of books and, from them, she could draw on tales of love and loss of incredible adventures and of genies and magical beasts. And there was a large section dedicated to erotica. She studiously examined these books, became absorbed in their pictures and read the advice offered by courtesans in their texts. Through them, she had learnt how to give oral, as well as aural, stimulation to the Sultan.

As he reclined on the divan bed, taking a sip of wine, she slid a hand into the gap in his silk robe. She brushed her fingers tantalizingly against his cock and felt it twitch with arousal. The Sultan let out the slightest moan of pleasure.

“You are wise, O mighty Sultan,” she said, as she wrapped her fingers around his hardening cock, “not to trust the fairer sex. For it is true, we are wily and not to be trusted.”

The Sultan let out a gasp as Scherazade tightened her fingers around his erection and pulled on its shaft.

“You did well to treat those virgins so. And how many tales will it take before you release your wife and Queen from the threat of the scimitar’s sword?” she asked as her hand tugged at his member with vigorous strokes to the sound of his groans.

Scherazade removed her fingers from his cock and untied the cord around the Sultan’s robe. She parted it to expose the smooth, brown skin of his chest and drew her painted fingernails across his flesh. She bent over him to take his engorged penis into her mouth and ran her lips up and down its shaft. His body twisted and jerked in ecstasy at the soft touch of her lips on his hard cock.

She removed her lips from his penis and let her silk gown slide onto the floor. Naked, she crouched over him, her cunt hovering invitingly over his crotch as the delicious orbs of her breasts hung over his face. She lowered herself onto him, taking the full length of his rod into her. She sat up and rotated her hips around his member, gradually bringing him to his climax. He moaned in pleasure as he came inside her.

She lay on the divan, her head resting on his chest, as she fondled his now flaccid, cock.

A few months of nights like these, with bewitching tales and seductive sex, and he was already captivated by her. She knew. She would avoid the executioner’s sword. Yes, she would rule as his Queen. She would make herself indispensable to him and then, unlike those innocent virgins, not only would she avoid death, but she would live to control him. She could see it already… it would take much less than 1001 nights before he belonged to her.

“The story, my Sultan?” Scherazade murmured in the soft tones of post-coital bliss.

“Yes, my love. You must start your tale.”

She cupped his face in her hands and kissed him.

“Then I shall begin. If your highness will indulge me, I believe you will find the story of The Nemesis Bird instructive… and arousing. Listen to my tale and then, O mighty Sultan, pass your judgement on whether your humble wife and servant should die an unworthy wretch at the hand of the executioner’s sword or live to entertain your majesty another night.”

King Shahryar raised his hand and bid Scheherazade to begin her story.