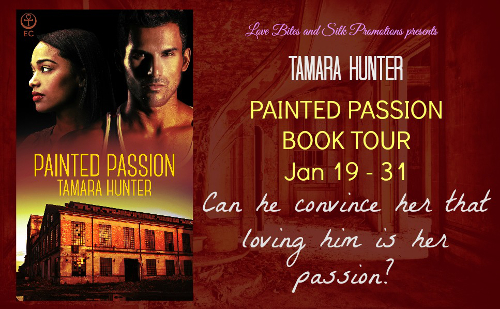 Trella Arnold’s upcoming art show is her primary focus until she uncovers information which causes her to question circumstances surrounding her husband’s death. She contacts his former partner in spite of the danger he poses to her peace of mind.

Carlos Diaz owns a successful investigation firm, having left the Phoenix Police Department after the murder of his best friend. Carlos’ life is uncomplicated—at least until he receives Trella’s phone call. Despite his misgivings at seeing the only woman who ever made him dream of settling down, he agrees to help.

Trella’s probing for answers lands them both in a sticky situation. Carlos moves in to protect her, but he can’t fight his attraction. Soon he’s in her bed and she’s in his heart.

Can he convince her that loving him is her passion? 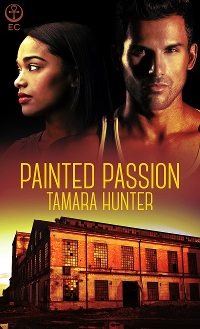 Carlos needed to be inside her. Now. Damn…his condoms were downstairs. The sobering thought blunted the haze of desire. “Baby, I don’t have any condoms with me.”

She stopped moving, disappointment visible on her face.

“It won’t take a minute to get one.” He reassured her.

She thrust against him.

He gripped her waist. “If we aren’t going any further, you need to give me a minute.”

With a mischievous glint in her eyes, she slid to her knees on the floor, her arms rubbing up and down his thighs.

She reached up and placed a forefinger against his lips. “For you.”

He sucked Trella’s finger into his mouth. She indulged him only a moment before pulling free with a soft pop. She encircled his thickness and squeezed.

Hissing, he tightened his abs, his cock pulsing in her hands. She kissed the tip of his dick. A groan erupted from him. She licked his length in long, wet drags. So good. She sucked the tip between her lips. Gasping, he watched as inch by inch of him disappeared until her lips touched the hair at his base. He curled his toes. She slowly released him. A pearl of liquid glistened on his tip, and she licked it off with a hot swipe of her tongue.

His breathing became more uneven, and he held her hair to one side, his eyes glued to her every movement. She swirled her tongue around then down his length, over and over, varying her speed each time, slow then fast.

Carlos had long since lost the power of speech, and his grunts and groans filled the room. His hands roamed through her hair and down her shoulders.

She released him, and he thought she would allow him a reprieve, but she pushed his thighs farther apart. She buried her face against his pubic hair, rubbing her nose back and forth as if memorizing his scent. With a naughty smile, she lifted her head. Her hot, wet tongue connected with the flesh behind his right knee, and he jerked in response. He held his breath as she treated his other knee to the same. If he could’ve said anything intelligible, he’d have promised her everything he owned. He dragged in his breath as she kissed up his thighs.

She licked the juncture of his groin and thighs. He groaned, and she pushed his thighs farther apart.

At the first touch of her mouth on his balls, he moaned. If it were possible, he grew harder. He opened his eyes. Seeing her head between his legs was a sight he knew he’d never forget. He wanted to make the moment last, but watching his cock slide in and out of her mouth broke him down. His legs trembled.

“Suck me harder,” he panted. Every cell of his body strained toward completion.

She encircled the weeping tip with her hand, swiped the slit, licking at his pre-cum.

“Mmm,” she murmured. “I love the way you taste.” She glanced up at him and grinned.

Tamara Hunter fell in love with romances at an early age and always had a book in hand. Her love of reading continues today and she enjoys romantic fiction from historicals to contemporaries to paranormals.

Everyone needs love and there’s nothing more satisfying for Tamara than exploring relationships between characters—particularly when said relationships include hard-to-resist, sexy men who will do anything for the woman they desire.

When she’s not creating tales of her own, she enjoys spending time with family and friends, cooking and traveling.