You are here: Home / Guest Blogs / Pink is the New Black by Cheryl Dragon 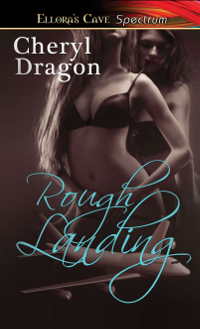 But with the popularity of Orange is the New Black, I couldn’t resist 🙂

F/F isn’t the hottest genre out there but if any show proves that women label each other and overthink the drama crap—it’s this one! Plus it shows that a woman with complicated sexuality can be the main character in a wildly popular show.

The main character was a lesbian and turned straight…?? Okay. Then again, she’s not really done with women…is she?

In one episode, she talks about sexuality as a spectrum. It’s fluid and she’s right. In high school, a friend of mine’s younger sister went to prom with another girl. In college, she identified as bisexual. Who cares? Unless you want to date her…doesn’t really matter.

Some people do. Some don’t understand the bisexual part of the spectrum. Lesbians don’t want to lose a girlfriend to a guy…but what’s really the different between losing her to another woman? That issue crossed my mind when I wrote Rough Landing.

The two women are very different. Kate is a lesbian who isn’t looking for drama or for a newbie. But she has fallen for a coworker who isn’t out at work. Steph has dated men and had slept with women as well. It’s complicated…Steph is enjoying the relationship and doesn’t want to deal with the ‘outing’ or the labels.

On the flip side, Kate isn’t interested in a secret relationship. Bi, lesbian…the labels don’t matter to her but no one wants to be a secret. No one wants a relationship in the closet. That’s like being in prison without the fences and guards. Labels can be tricky but they can change too…Love is way better than prison!

Kate Pacinelli has been infatuated with fellow flight attendant Stephanie Carlson for months. While Kate is out, Steph’s preferences are a mystery. The former cheerleader has a complicated, bisexual past.

It’s a smooth ride for both women until a rough landing shakes them up and changes their relationship.

Hot sex in private doesn’t translate to the public relationship Kate is looking for. She’s fallen for women afraid to come out before and won’t have her heart toyed with again. When Steph avoids conversations and labels with expert seduction, Kate refuses to play closet games. Steph will have to come out or risk losing Kate for good.