You are here: Home / Guest Blogs / The Mystery – A Guest Blog Post by Monique Roffey (@MoniqueRoffey13)

Google the Words ‘Mystery’ and ‘Female Sexuality’ and you get hundreds if not thousands of posts on the net. These posts range from BBC documentary style investigative programs, to sexual heath experts, to a nice Australian bloke who made his own videos and diagrams about women’s genitals, and advises on how to ‘aim your penis’ toward a woman’s G-spot while copulating. I love that man. He’s on the right track. He has lots to say about why women like to be on top, too. Truth is, female sexual desire is a mystery and deserves a list of descriptive words: enigma, elusive, evasive, unpredictable, hidden. My first ideas abut sex came from Hollywood films where I witnessed countless women ‘dying’ at the thrusts of a man, their faces twisted in pain, while simultaneously reaching orgasm with their mate. Something was being done to them, I knew that. I wasn’t sure what it was, though. Were they were being stabbed from below, up and into the chest area? I remember seeing Kim Basinger and Alec Baldwin in a tryst, under a water fall, having it away, both of them reaching orgasm together. I was mesmerised. I was about fifteen. Astonished, I had all that to come. I couldn’t wait.

Cut to, my 41st year on earth as a woman. This mutual simultaneous orgasm thing hadn’t happened, yet, waterfall or no waterfall. Nottin’ doing like that. I suspected my vagina didn’t work. I had slept with many men and had been waiting for the ‘orgasm from thrusting’ experience and had been hanging on in there, but nope. Everyone else knew that was how it happened, and went dead when I asked too many questions.

Well, after a decade of sexual journeying, I know that everyone else is lying. Women are faking it, (mostly). Just ask any lesbian. “Straight women have shit sex,” says my current flat mate. Straight women collude with this shagging as goal to female orgasm for the sale of keeping the peace, for fear of failure and embarrassment (as I had been) and keeping the biggest secret on earth. That women don’t orgasm from fucking; something happens, it can be exciting, but not that, for most of us.

Miss Unfucked reappeared with pints of beer for the men and looked quite rightly startled to see me in their midst. No one explained me properly; I intimated that I knew the dark-haired man. Funny how the English cannot be plain speaking, ask questions. Fishy, awkward, difficult things can happen but they pass by undiscussed; the English are too polite or perhaps too innocent to think the worst. I always took advantage of this to operate. The dumb stupid Queen-ass-kissing prudes. Miss Polo Neck coughed and the men bucked up and I introduced myself, a name I give sometimes: Lilah, I said. Of course, I lay claim to many others. Lilah Hopkins from the Deep South.

I was in control of them then, spinning some crazy outlandish story they gulped down, talking my best deep slurred Southern drawl. Our language has a similar cadence, butter-soft, and we like to use rich sexual words and curse like heathens, so I can easily pass this particular identity off. I told my favourite off-the-peg story, that I was adopted, had been found in a basket on the steps of a church, that my adopted mother had been married five times, that I was a Baptist. They nodded and found this story interesting. Holy God on earth! If I’d told them the Goddamn truth they would have swallowed that whole too, all po-faced and serious, nodding thoughtfully. I could have told them who I really was then and there; they were so nice, so courteous.

Miss Polo Neck, I have climbed out from between your legs.

I am crafted from impure sediment. I am the thing that is bothering you. I have many names.

I am your pest, your very own, come forth from all your anxieties, your half-slept nights. From your dream trysts, from where you’d like to be. Oh, yes, I know about them, how you like to indulge yourself, press your hand between your legs and rub. I am from the dark recess of your other life, the life of your unspent lust. I know a thing or two about restlessness. Oh, yes. I am the one who fled. I left my own marriage bed. You don’t live as you wish to. You do not love your husband in the way he wants to be loved.

I am your very own thorn. I am your itch.  Open your legs wider, Miss Unfulfilled.

Instead, I wriggled on my chair and flashed my smooth underarms, and flashed a hint of cunt. I kept up my stories about Alabama.

But Miss Holy Tits fell back, removed herself from the conversation; wisely, she didn’t try to compete. She sipped her wine and watched and listened, and I began to grow suspicious. Only she, as women do, noticed my ears, studied them with interest, as she should have, for they are remarkable in the human realm. I never tried to hide my ears. She noticed the charm I was sculpting too, with the peanuts. I know she also found me sexy, all do. I am a spectacle, a work of art, a creature most humans never see in their lifetime. Some half-guess but never trust their intuition, what they plainly see, which is why I often showed off my attributes, my pretty pointy ears. No one ever thought me real or true and so I got away with it. Miss Charity Fuck sipped and stared and guessed half-right, but in the end I don’t read minds and was truly surprised by what she did next.

Bill flirted with me and she freakin’ watched. She didn’t put up a fight, despite her unhappy pussy, didn’t snatch him up possessively, which can happen, suggest they go home, take him away from me; she didn’t condescend to me outright. No, to my utter amusement, the little prig was also playing a game. And then Sebastian’s mobile phone erupted, a relief. He was slobbering over me. He walked away to take the call and then Miss Polo Neck did what no woman had ever done before. Giving me a tight, forced smile she excused herself, leaving me alone with her husband.

Lord, oh Lordy-Lord. Did I ever give the husband a fright. What a sensitive type, this tree of a man. I wanted to have him there and then, put my hand on his crotch, hold him secure in my soft, skilled hands and smile while he stiffened up. I wanted to drop to my knees and bury his cock in my mouth. The females of my race have all been schooled from an early age in the art of Eros. My people have consorted with the tantrikas of India, the mystic Sufis of the Middle East, the Daoists of China, the great witches and sexual magicians of Europe, and we have learnt the art of giving pleasure. We have perfected our own sexual magick. Poor Bill. Little Miss Chastity Belt had abandoned him.

Lightly, I touched my breast.  Bill froze and stared. He seemed mortified, longing to gaze at me, trying not to. He couldn’t stop himself. He couldn’t say anything either; he was shocked and stunned and afraid of me. I smiled as I continued to caress myself, pretending nothing unusual was happening, acted all breezy and happy and all the while I unleashed the force of my nature.

London, midsummer night. Jane and Bill meet the mysterious Lilah in a bar. She entrances the couple with half-true, mixed up tales about her life. At closing time, Jane makes an impulsive decision to invite Lilah back to their home. But Jane has made a catastrophic error of judgment, for Lilah is a skilled and ruthless predator, the likes of which few encounter in a lifetime. Isolated and cursed, Jane and Bill are forced to fight for each other, and, in doing so, discover their covert desires.

Praise for The Tryst

“What makes The Tryst an unexploded virus isn’t just the quality and brightness of Roffey’s writing on sex, even as it uncovers inner glades between flesh and fantasy where sex resides – but the taunting clarity of why those glades stay covered. A throbbing homewrecker of a tale, too late to call Fifty Shades of Red.” 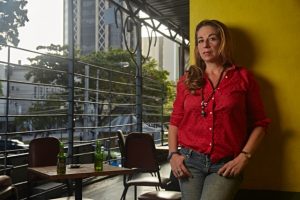 Monique Roffey is an award-winning Trinidadian-born writer. Her novels have been translated into five languages and short-listed for major awards including the Orange Prize, Costa Fiction Award, Encore Award, Orion Award and the OCM Bocas Award for Caribbean Literature. In 2013, Archipelago won the OCM BOCAS Award for Caribbean Literature. Her memoir, With the Kisses of his Mouth, was published in 2011. She is a Lecturer on the MFA in the Novel at Manchester Metropolitan University. She divides her time between the East end of London and Port of Spain, Trinidad.