You are here: Home / Guest Blogs / Exclusive Excerpt from Tight Quarters (Out of Uniform #6) by Annabeth Albert (@annabethalbert) #giveaway 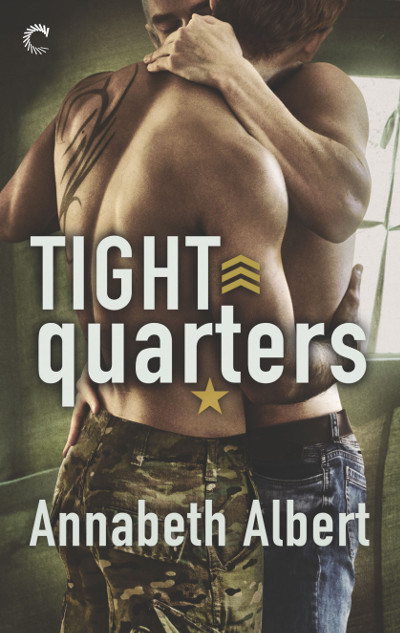 This super sexy exclusive excerpt is part of my one of my favorite sex scenes in TIGHT QUARTERS which stars Bacon, my pansexual SEAL, and his silver fox reporter co-hero, Spencer. Thanks so much for having me!

His intent stare made Bacon squirm in the best way possible and reminded him that while he’d had a bone-melting orgasm, Spencer had not.

“How do you want me?” he asked as Spencer pulled back the covers and tossed the supplies on the bed.

“Exactly how you were in the shower. All blissed out and begging for my cock.”

“That can be arranged. You gonna give me your mouth again?” Letting his towel flutter to the floor, he stretched out on the large bed—had to be a king, which felt like such a luxury after years of singles.

Discarding his own towel, Spencer lay down next to him, pulling him in for a kiss that was full of filthy promises. “You liked being rimmed, huh?”

“Loved it.” Bacon wasn’t above being shameless.

“How do you feel about fingers?” Spencer reached for the lube.

“I’m in favor of them. Feel free to go right to your dick, though. I like a good stretch.”

“Guess that answers my question of whether you’ve done this before.” Spencer laughed and gave him another kiss. Damn, but the man could kiss—all barely contained heat contrasted with practiced finesse.

“You are so delightfully not at all what I expected.” Spencer pulled him close, tongue tracing his lips before licking its way into Bacon’s mouth. While they kissed, Spencer fiddled with the lube and then his slick fingers started tormenting Bacon.

“What part of now didn’t you understand?” he growled as Spencer masterfully played his nerve endings, circling and teasing, pressing in but then retreating.

“The part where I’m in charge.” Spencer punctuated his words by finally going deep enough to graze his gland, working that spot till Bacon was writhing on the sheets. His cock had never completely gone down from earlier and was back at full, insistent mast. Spencer seemed content to wait until he was a begging mess.

“You want me to fuck you good? Take you hard?”

“God, yes. Please.” He didn’t even try to keep the tremble out of his voice.

Fucking hell, but bossy Spencer was a sight to behold, and Bacon reveled in his commands and the hard edge to his voice. He rolled, resting his head on his folded arms, ass up as requested.

Petty Officer Bacon, a navy SEAL and ace sharpshooter, has been on the front lines of more than his fair share of dangerous ops. Yet when a minor injury relegates him to the beta team, he’s tasked with what may be his riskiest assignment yet: the silver fox journalist he’s babysitting is the hottest, most charismatic man he’s ever encountered.

Award-winning journalist Spencer Bryant may have been named one of Pride magazine’s most eligible bachelors of the year, but he’s not looking to change his relationship status. He’s a consummate professional who won’t risk his ethics or impeccable reputation by getting involved with a source. Even a sexy-as-hell military man. But while Spencer can resist his physical attraction to Bacon, he has less control over his emotions—especially when the mission goes sideways and the two men are trapped alone.

Getting out of the jungle alive turns out to be easy compared to facing the truth about their feelings for one another back in the real world. And whether or not they can build a future is a different story altogether.

This book is approximately 82,000 words

Annabeth Albert grew up sneaking romance novels under the bed covers. Now, she devours all subgenres of romance out in the open—no flashlights required! When she’s not adding to her keeper shelf, she’s a multi-published Pacific Northwest romance writer.  The #OutOfUniform series joins her critically acclaimed and fan-favorite LGBTQ  romance #Gaymers, #PortlandHeat and #PerfectHarmony series.

To find out what she’s working on next and other fun extras, check out her website: www.annabethalbert.com or connect with Annabeth on Twitter, Facebook, Instagram, and Spotify! Also, be sure to sign up for her newsletter for free ficlets, bonus reads, and contests. The fan group, Annabeth’s Angels, on Facebook is also a great place for bonus content and exclusive contests.

Emotionally complex, sexy, and funny stories are her favorites both to read and to write. Annabeth loves finding happy endings for a variety of pairings and is a passionate gay rights supporter.  In between searching out dark heroes to redeem, she works a rewarding day job and wrangles two active children.

Reader’s Choice of any Out of Uniform book in paper + surprise swag pack!