You are here: Home / Interviews / An Interview with J.C. Long (@j_c_long_author)

How do you answer the question “Oh, you’re an author…what do you write?”
Stories with lots of sex and the occasional dead body.

What does your family think of your writing?
They think it’s great I’m doing what I always wanted to do, even if they don’t think that what I’m writing is useful/appropriate (inappropriate? Me? Noooo).

Tell us about your current work in process and what you’ve got planned for the future.
My current WIP is the second of my Gabe Maxfield Mysteries (the first one out in the near future from NineStar Press). This year I plan on getting the next three or four Hong Kong Nights books turned in to my editor. We’ll see if I make it.

Do you have any advice for all the aspiring writers out there?
Don’t try to write in any particular style just because you think it will sell. Tell YOUR story the best way you can. Someone will have faith in it and someone will want it. You don’t have to follow “trends” in the industry.

If you could travel forward or backward in time, where would you go and why?
I actually like where I am right now. But I really wanna go to the future and see when we finally get space travel. Also when A Song of Ice and Fire finally ends.

We’ve all got a little voyeurism in us right? If you could be a fly on the wall during an intimate encounter (does not need to be sexual) between two characters, not your own, who would they be?
Rhys Ford’s Cole and Jae from the Dirty series.

If I were snooping around your kitchen and looked in your refrigerator right now, what would I find?
Lots and lots of kimchi (I just received a care package from a friend in Korea). And Cola. 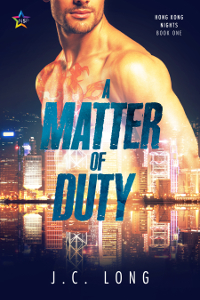 Noah Potter has come to Hong Kong to find his missing sister, Lianne, who disappeared after leaving him a voice mail pleading for his help. Unfortunately the Hong Kong police are unwilling to help him, so Noah has to find her himself.

Noah’s search for his sister brings him across Wei Tseng, leader of the Dragons, a group of dedicated men and women willing to do whatever it takes to keep their district safe from the violence and triads that plague the rest of the city’s underworld. Wei is a man of violence but also one of incredible compassion, and his history is one that resonates with Noah, igniting a passion neither man expects.

Together they search for Lianne, a search that will lead right into a conflict with the Dragons’ greatest rivals in the city.

Hong Kong International Airport sat on a small island all its own, like most airports in Asia that Noah had visited. To enter the city proper, one needed to take the metro system or hail a bus or a cab. Noah knew all this when he arrived; he’d prepped for this the moment two weeks ago when he’d tried to call his sister back and received no answer any of the one hundred seventy-two times he’d called over the course of two days. That made him realize he needed to come to Hong Kong and find his sister. He needed to bring her home, if he could.

No, no if—he would bring her home. He’d just stepped off the plane, there must be no doubt in his mind; if he did not have hope, he might as well give up right now.

The interior of the airport’s beauty matched its exterior. Skylights hovering high above his head cast afternoon sunlight down on him, bathing him in its warmth. The architecture was modern, all sleek glass and deceptive perspectives, but even here, surrounded by large numbers of tourists pouring into the city at the end of their summer vacation, hoping to enjoy Hong Kong’s best summer month, he could not mistake this for the West. Everything felt different; a foreign flavor filled the air, swirling in Noah’s lungs and coating his tongue. Announcements made over the airport’s intercoms came in Chinese, Korean, Japanese, and English. The signs read in those languages and more—German and French and Vietnamese as well.

There was a sort of magic to this place, magic he felt being in the airport, not even truly out in Hong Kong yet. The airport dominated a man-made island, and as he took it all in, Noah felt the strangest sense of anticipation. Part of Noah could not wait to see what the rest of Hong Kong felt like once he was out amongst its crowded streets, deep within the pulse of this city with the highest population density on the entire planet. He did his best to repress that part, though; this was no pleasure tour. He was not a tourist like those who passed him, whiling away their Septembers before slipping back to the mundane banality of their lives. He envied them that, wished he could explore the avenues of a new place before slinking back home, back under the thumb of his cold, uncaring father.

Noah had a task to do, though, so he would have to control the wanderlust that gripped him as tightly as it ever gripped Lianne.

He reached the escalator that would descend deep underground to the metro. As he waited, he dug into his backpack, seeking out the crumpled paper where he’d jotted down instructions on how to get where he needed to go, making sure he did not get lost. It was merely reflex, however; he’d committed that paper to memory a week ago.

Noah hadn’t spoken to Lianne right before she left. He’d been angry and made damn sure she knew it. He hadn’t known where in Hong Kong she went, what she’d do when she got there, or even how to contact her once she got there, other than the cell phone—and how reliable would a cell phone be? Hong Kong was basically China, right?

Before she left, though, she’d left information about her flight with their father, along with an address for a room she’d found online. It was in the Eastern District, so all he had to do was find it and see what was going on.

People and their luggage crowded the subway. Though the surface hadn’t seemed so bad, the subway car was stifling hot with so many bodies crammed close together. Noah felt the earlier claustrophobia’s nauseating grips on the corner of his mind and forced himself to focus on the different colorful advertisements all along the upper portion of the subway to distract himself. It was a forty-minute subway ride according to the app he’d downloaded on his phone, and he would have to transfer once he reached a place called Center. He needed to keep it together until he did.

Impulse driving him, he dug his iPhone out of his pocket and stared at it. His background picture was, as usual, a picture of himself and Lianne together. Though she was four years older than him, some people thought they must be fraternal twins since they looked so similar. Both had pale skin that tanned to a beautiful copper in the summer sun, similar brown-blond, almost ash-gray hair, and the same round blue-green eyes they’d inherited from Vivienne Maureen Potter, their beautiful mother.

According to the top of the phone’s screen, he had service—he’d made damned sure he’d be able to use the cell phone once he got here in order to contact his sister. Without consciously choosing to, his fingers hit the call button on his sister’s name. He watched as it said connecting, hoping she would answer the phone, explain that she’d gone off to visit some other place for a few weeks and was back now, safe, and the voice mail was some angry reaction to a breakup with the fifth boy she’d been dating since her arrival in Hong Kong. He prayed she’d pick up, like every other time he’d tried to call her in the last two weeks.

Hands shaking slightly, he brought the phone to his ear. Straight to voice mail, just like every time since he received her message. It didn’t even give him the benefit of hearing her voice, either; it was one of those generic “This number is not available. Please leave a message after the tone” messages. The hope that had been growing in his heart crumbled to dust, just as it had each time before.

It took every ounce of control he possessed not to redial the number immediately, but he managed. A man could only take so much disappointment at a time. 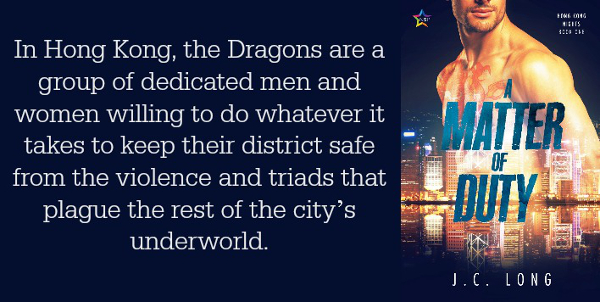 J.C. Long is an American expat living in Japan, though he’s also lived stints in Seoul, South Korea—no, he’s not an army brat; he’s an English teacher. He is also quite passionate about Welsh corgis and is convinced that anyone who does not like them is evil incarnate. His dramatic streak comes from his life-long involvement in theater. After living in several countries aside from the United States J. C. is convinced that love is love, no matter where you are, and is determined to write stories that demonstrate exactly that. J. C. Long’s favorite things in the world are pictures of corgis, writing and Korean food (not in that order…okay, in that order). J. C. spends his time not writing thinking about writing, coming up with new characters, attending Big Bang concerts and wishing he was writing. The best way to get him to write faster is to motivate him with corgi pictures. Yes, that is a veiled hint.

One lucky winner will receive an ebook of their choice from NineStar Press.