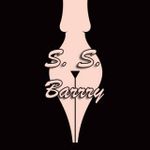 Here’s an author interview with S.S. Barry. Take it away, S.S…

I don’t think I have any usual writing rituals, per say. However, I do often end up getting turned on while writing sex scenes, and then have to deal with that. *chuckles* I’m not sure if other erotica authors experience the same, I assume they do, but for me personally, it makes writing those scenes all-the-more fun yet trickier.

Honestly, I’ll write just about anywhere, whether on a desk or in bed, as long as I have a computer, the Internet, and some privacy. Usually though, I find it more convenient to write erotica on the laptop while lying in bed.

As of now, I don’t think I have written a character yet that I could call my favorite. As I continue writing and publishing more, hopefully I might be able to pick a favorite.

My parents don’t know about it, and I’m secretive about it with them. The only thing they know is that I write, and have published a few short stories. Just a few of my online friend know that I’ve gotten into writing erotica.

As a child, the first time I spoke about something career-related was when I told my parents I wanted to become an archaeologist. That kept on changing over the years until I finally realized that I was meant to be a writer.

I don’t think I really have to get myself in the mood to write, unless I’m feeling lazy and am procrastinating. It’s more about having a worthwhile idea and the time to write it down.

Since I’m still learning, I don’t think I’m in a position to give tips yet. However, I can pass on a tip that I’ve come across often, which is to write as much as you can on a daily basis. While I’ve not been able to write every day myself, but I am aspiring and hoping to do so.

It tends to happen, every now and then, and currently, I just decide to take a break and wait until I feel inspired to write again, or I just search for inspiration. As of lately, my periods of writer’s block have not been too long.

So far, the protagonist of my first story was female, and the one of my second, upcoming work is also female. I wouldn’t mind bringing either of them to life, for selfish reasons. *chuckles*

Oh my, there are quite a few actually, neither of whom I can meet, sadly. Henry Miller would be at the top of the list, I guess. I just assume it would be quite interesting to meet and get to know him during the prime of his writing career. Others I would have liked to meet include Anaïs Nin, Lawrence Durrell and Gerald Durrell, and perhaps some even older ones would include Ernest Hemingway and F. Scott Fitzgerald.

Again, I don’t think I can pick a favorite, mainly because they all increase and I have so many kinks. If I had to pick, I’ve been a bit inclined towards writing cheating- and interracial-themed erotica.

Last year, I started writing an erotic, interracial-themed novella that was going to be set in Saudi Arabia, revolving around an African American man and a married, Muslim woman, the wife of a sheikh. However, I had to put it on halt after having written just one chapter.
At the moment, I am working on another lesbian-themed novella that is set in Paris, which started out as a short story. It has relatively more plot and dialogues compared to my first short story. Slowly and steadily, I have also been working on my very first novel that I hope to publish under my real name via a publisher. It’s more like a journal in which I share my own personal beliefs, opinions and thoughts on sex and how it is perceived in my country.

The biggest challenge that I am struggling with is to juggle my freelance ghostwriting career (I work as a freelance writer to earn my bread and butter) and my creative writing pursuits. I hope to succeed at pursuing the latter as a full-time career and having enough time to thoroughly indulge in it.