You are here: Home / New Releases / A Bridge to Love by Lee Colgin (@leecolgin @goindimarketing) #giveaway

Everyone knows a proper troll must never leave his post. Arlo is thrilled to have his own bridge to guard, though it’s a lonely job. A troll should enjoy being alone, but Arlo has never been very good at being a troll. He longs for companionship, but guards that secret like he guards his bridge.

Toby, a cheerful wolf shifter, serves as a messenger between villages. When his route is suddenly blocked by a fearsome troll, he must charm his way across the bridge. Little does he know, he’s charming his way into Arlo’s heart as well. But Toby has his own secrets he dare not reveal.

As the season’s fly by and the holidays approach, their friendship blooms and begins to flourish into something more. But can Toby risk his heart for a troll bound so tight to duty? Will Arlo leave his bridge for love?

A Bridge to Love is an MM Fantasy Romance featuring an adorable gay troll and the sweet wolf shifter who falls for him. Tropes include friends to lovers, slow burn, and hurt/comfort. Sappily ever after guaranteed! 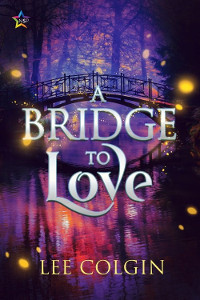 A Bridge to Love

Adjusting his scarf to block out the chill, Tobias trotted along the path to Red Elk River. There, he would cross the bridge and hang a left onto the trail that led to the Fern Pack’s territory. His satchel was filled to bursting with gifts because it was the night before Christmas Eve.

A roundtrip to visit his sister’s family, one he’d made many times, took from sun up to sundown, especially during winter when days were short and nights long. Toby enjoyed his role as messenger between the wolf packs. He preferred spending his time outdoors. The exercise sent blood pumping through his veins. If he dawdled enough, the stars would keep him company as the path guided him home.

Snow threatened. Toby scented it on the cool breeze. He hoped the weather would hold out until he’d returned safely to his little cottage, but then he’d love to see his village blanketed in white for Christmas.

Toby heard the river before it came into view. The rippling waves of the Red Elk never froze over. The water simply moved too quickly to be captured by a force as fickle as frost. No matter how cold the winter, the wolf shifters could catch fish there. As a youngster, Toby spent lots of cheerful summer afternoons splashing along the moss-covered banks with his many siblings and countless cousins. The memory brought a smile to his lips.

His grin remained as he stepped on the footbridge’s wooden planks that spanned the narrowest section of the river. He ambled across, gazing at the rushing water and protruding rocks below.

“Ho! Who’s there?” came a booming voice from beneath his feet.

Toby startled and hopped back.

With unexpected grace, a large troll, his skin as grey as granite, climbed from under the rafters to block Toby’s way. He stood a head taller than Toby, with coppery-orange hair cropped close to his head. Eyebrows that could be mistaken for caterpillars drew tight together, and broad shoulders flexed beneath layers of dingy wool. His cheeks were flushed and puffy. But what Toby found most startling were his robin’s-egg-blue eyes, watery and glazed over as though he’d been crying.

“Hello, Arlo. My name is Tobias.” Toby offered his hand. “My friends call me Toby.”

Arlo sniffed and stared at Toby’s hand as if he had extra fingers that had been dipped in slime. After some awkward consideration, he reached out and swallowed the smaller hand in his giant one with a gentle grasp. Arlo’s warm hand felt so good, Toby didn’t want to let go.

“Well then, what should I call you?” Arlo grunted.

“I meant we should become friends.” Toby gave Arlo’s fingers a squeeze. “So call me Toby.”

Puffing out his chest, Arlo dropped Toby’s hand and roared, “Don’t think I don’t know what you’re playing! You only want to be friends to avoid paying tribute. I won’t have it, Tobias. I guard this bridge, and if you’d like to use it, you must earn it fair and square.” He crossed his arms and glowered.

Toby scanned the landscape. A lush canopy of trees on either side, chipmunks scurrying to their burrows, clouds overhead. Which of these threatened the footbridge of Red Elk? And since when did this bridge have a pouting resident troll?

“Guard it from what?” asked Toby, curious.

Arlo shrugged like that wasn’t important. “What will you give me to cross?”

“Well I suppose I must give you my apologies as I’ve brought nothing extra on my journey. And I would like to be friends. You look as if you need one.” He studied Arlo’s expression and saw a longing there that hinted at melancholy. “Are you quite all right, Arlo?”

Their gazes locked; Arlo’s teary blue eyes glared with scrutiny, even as Toby offered a smile. The troll glanced away and exhaled, breath wispy in the wintry breeze.

“Looks like you have plenty.” Arlo gestured to the bulging sack over Toby’s shoulder. “What’s in the bag?”

Arlo huffed and turned up his nose. “I will take your apologies this time, but next we meet you’d better have a tribute.” The troll stepped aside to let Toby pass.

Reluctant to leave Arlo alone and unhappy, Toby asked once more. “Are you sure you’re all right?”

Toby moved one step closer, within an arm’s length, his gaze lingering on Arlo’s face. Handsome features, though not typical: rounded cheeks framed an angular jaw, a sharp nose sat over his plump finely shaped cupid’s bow of a mouth, and upon close inspection, a smattering of charcoal freckles fell across his silver-grey cheekbones. Toby rather liked Arlo’s looks, except for the puffy eyes. Why had Arlo been crying?

“Go on,” said Arlo, the rough timber gone from his voice. The words now came in a gentle rumble. “I have things to do.”

Toby gave a little nod. “If you’re sure.”

Toby crossed the bridge. When he got to the other side, he glanced over his shoulder to find Arlo still watching. With a friendly wave Arlo didn’t return, Toby continued on his journey. He wondered what he should bring back for Arlo on his way home.