You are here: Home / New Releases / A Matter of Courage by J.C. Long (@j_c_long_author @GoIndiMarketing @ninestarpress)

Winston Chang has spent much of his young life admiring the Dragons who have kept his area safe and fought off the gangs that would bring violence to their area. Now that he’s an adult, he wants nothing more than to join the Dragons and live up to those standards.

The opportunity presents itself when his passion and knowledge of cars is just what the Dragons need. One of their own has been killed and his death seems linked to his involvement with the illegal racing scene known as the Dark Streets. Winston is needed to infiltrate the scene and find out who is responsible and why. 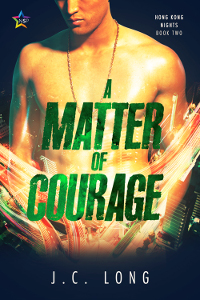 Will Winston and Steel be able to find the courage to face not only the unknown killer stalking the Dark Streets racers but also their growing feelings?

A Matter of Courage

Winston Chang awoke with a splitting headache, a mouth that tasted like rubbing alcohol, and the feeling that he was on a boat out at sea during a storm. His stomach flip-flopped just from opening his eyes, and he let out a pitiful groan. He closed his eyes again and gritted his teeth to fight back the nausea that washed over him at the smell of his own breath.

What the fuck did I do last night?

He waited until the bout of nausea passed and slowly opened his eyes once more. He was happy to find he could open them without making himself puke; it was progress. He stared up at the ceiling, confused. It wasn’t the ceiling of his room. His ceiling didn’t have those weird little texture-bumps all over it.

The next thing Winston noticed was the sound of someone else snoring. He turned his head to the side, wincing at the stab of pain the movement caused. His best friend, who liked to be called Steel, was lying facedown on the bed next to him, head turned facing his direction. Steel was still lost in sleep, snoring every so often.

Staring back up at the ceiling, he tried to remember something, anything, from the night before. He and Steel had gone to a bar, that much he remembered—like he remembered it being Steel’s idea, because it was always Steel’s idea. The place was a dive, dimly lit, stinking of smoke and booze and sweat. At some point in the night, they’d been approached by a group of people who asked them to join their group. Winston had been hesitant, wanting to get in early, though he couldn’t recall why he’d kept insisting they leave. Steel had convinced him to stay, as always. Winston never could tell Steel no.

He vaguely recalled stumbling back to Steel’s apartment, which was near the club, unable to drive home, barely able to walk up the single flight of stairs to Steel’s apartment. At one point, he had thrown up, though he couldn’t remember when, and everything after that was a complete blur.

Grunting, he sat up, and immediately buried his head in his hands to fight the swelling nausea that threatened to empty the contents of his stomach. Once he had it under control, he turned toward Steel. The way the sheet fell, Winston couldn’t tell if Steel was dressed.

He looked down quickly, lifting the sheet off his own form. He was naked and sporting quite the morning wood despite his hangover. It was funny the things the body did.

Why the fuck am I naked?

He glanced at the clock. It was nearly nine in the morning. He searched around him, finding no sign of his cell phone or clothes. He turned, shaking Steel’s shoulder roughly. “Dude, where’re my clothes? Dude!” He shook harder, and Steel finally stirred long enough to roll onto his back, muttering something unintelligible.

Seeing Steel lying like that made Winston’s pulse quicken. He raked his eyes over his friend’s sleeping body, admiring the musculature. Steel wasn’t a gym bunny, but his body was lean from a rougher-than-average childhood, whipcord muscles standing out with his arms stretched over his head. The room was chilly—Steel always slept with his air conditioner on—and his nipples were stiff buds. The sheet pulled down just enough for Winston to see that he was wearing his typical boxers.

Everything about Steel drew him in. He’d known Steel since he was ten years old—almost eleven years, now. For pretty much the entirety of that friendship, Winston had been in love with him. Something he’d been unable to shake. Most of the time, he didn’t think he wanted to—and then other times, Steel drove him crazy, and not just in a sexual way.

Winston couldn’t help his eyes traveling down to the dragon tattoo on Steel’s calf—his leg was sticking out of the sheet—and his admiration was interrupted by a jolt of envy. Winston longed to have one of those tattoos himself, the mark of the Dragons, the gang—for lack of a better word—that ran the Eastern District. The underworld of Hong Kong, both the island city itself and the New Territories on the Mainland, was run by gangs, competing against one another and struggling to gain power.

The Dragons, though, they were different. They didn’t rule through fear, drugs, or terror, but by protecting and serving the community. Wei, the leader of the Dragons, didn’t allow drugs to be sold in the Eastern District, and he didn’t demand protection money from the people; he protected them because it was a duty he’d taken upon himself.

It was a duty Winston wanted to take up, too.

He reached out to touch Steel’s chest and stopped himself, instead slapping Steel’s stomach—though it might not have been safer to go near his friend’s lower body.

Steel jerked awake, swatting at Winston, who knew his friend well enough to move quickly out of reach. “What the hell, man?”

“Where are my clothes?”

Steel flopped back on the bed, closing his eyes tightly. Winston sympathized with what he must have been feeling at that moment, and he was thankful his nausea was mostly gone, leaving him with just the headache.

Steel inhaled and exhaled slowly several times before answering. “You don’t remember? You puked all over them last night, so they’re in the wash.”

So that was when he threw up. That question was answered. “Okay, so how did I manage to get them off?”

Steel chuckled despite how much pain his head must be in. “You didn’t. You just tugged at the shirt like a baby, and I finally got you undressed. Dick stiffed right up when I took off those little boy briefs, too. How long has it been since you got some action, Winston?”

The sound of his phone ringing jarred Winston, and he peered around for it, finding it on the bedside table next to him. He grabbed it and saw that it was Conroy Wong, Wei’s right-hand man in the Dragons.

“Hey, Conroy.” He hoped he didn’t sound too hungover. Conroy didn’t disapprove of drinking—the opposite, actually; he drank like a tank and never in his life seemed to have a hangover—but if he knew Winston had one, he would take great pleasure in torturing him in as many ways as he possibly could. “What’s up?”

Dread coiled in Winston’s stomach; he didn’t like it when Conroy sounded angry at him. “What’s wrong?”

“Nothing’s wrong. Just wanted to make sure your punk ass was up. A few of my boys told me you and Steel were out drinking ’til dawn. How ya feelin’?”

“Good, then you won’t mind hoppin’ in your car and driving to the airport,” said Conroy cheerfully. Winston guessed if he could see him at that moment, he’d have that smug little smile on his face that drove Winston crazy. “The boss is busy right now, and Noah will be arriving this afternoon. Wei refuses to let him just ride public transportation like a normal person, especially since—”

“Since the subway will take him through Twisted Viper territory,” Winston finished. He understood Wei’s concern; their recent run-ins with the Twisted Vipers had been far less than friendly, and temperatures were getting even colder, fast. Considering Noah was at the heart of that unfriendly encounter, Wei’s concern was completely justified.

“What time is he getting in?”

“Damn it. That means I need to get going now.”

“Get on it.” Conroy hung up with that.

“What did Conroy want?” Steel asked. He was now sitting up in bed, looking relatively healthier. Winston felt a bit of resentment at his quick recovery.

“Asked me to ride out to the airport to get Noah. Wei’s busy.”

“Oh, is Noah coming back from America today?”

“I guess so.” Winston started out of the bed but stopped. “What the fuck am I going to wear?” 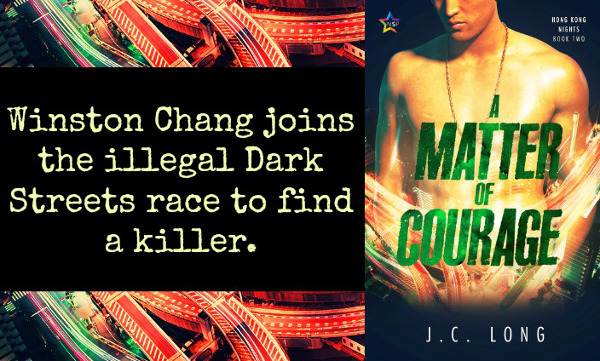 J.C. Long is an American expat living in Japan, though he’s also lived stints in Seoul, South Korea—no, he’s not an army brat; he’s an English teacher. He is also quite passionate about Welsh corgis and is convinced that anyone who does not like them is evil incarnate. His dramatic streak comes from his life-long involvement in theater. After living in several countries aside from the United States J. C. is convinced that love is love, no matter where you are, and is determined to write stories that demonstrate exactly that. J. C. Long’s favorite things in the world are pictures of corgis, writing and Korean food (not in that order…okay, in that order). J. C. spends his time not writing thinking about writing, coming up with new characters, attending Big Bang concerts and wishing he was writing. The best way to get him to write faster is to motivate him with corgi pictures. Yes, that is a veiled hint.