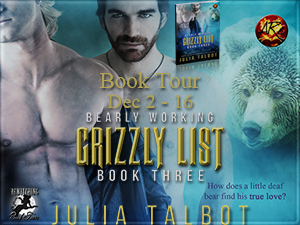 How can a deaf bear find his mate?

Deaf werebear Sasha loves his data entry job at The Grizzly List. When he receives Trent’s ad to place, he knows he’s going to answer it instead, even if it might cost him his job.

Sasha’s lack of hearing doesn’t bother Trent—his mother was deaf, too. There’s only one problem: it’s a long-distance relationship. It’s an issue he’s willing to overcome, because once he sees his little bear on Skype, Trent knows they’re meant to be together. 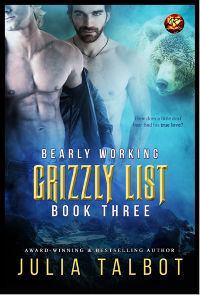 Big single grizzly bear in search of hot little bear who likes blondes from Alaska. Moved to Colorado permanently and looking for company. ND, social drinking okay. Old fashioned bear likes to go out to dinner, watch movies and cuddle. If you like hairy and totally ready to focus on you, I’m your bear. Reply to box 564 with your fav restaurant and a pic if you’re ready for fun.

The ad came with a picture of this tall, broad man wearing flannel, his shaggy blond hair and bright golden eyes the very picture of health and, somehow, joy.

Sasha sighed softly, using the mouse pointer to trace the features on the photo. Oh. Oh, that was… Look at that gorgeous face. The features were large, blunt, very grizzly. Just his type.

He looked up to see Vic and Marty having a fight, which they called a “discussion” about some new Facebook page rule and whether or not they needed to form a group. They loved to fight.

He glanced back at the screen. He was meant to clean this ad up, post it to the website and feature it in the weekly paper that went out in four towns. They were trying to expand through Utah and Wyoming, down into New Mexico, but right now this was a Colorado company serving Colorado bears.

This guy was in—Sasha checked the IP. Boulder. Yum.

The temptation to answer the ad, to just send a picture, the name Sizzling Siam, and an image of the Gladiator movie cover to the guy and hope for the best was huge.

Still, the rules were “no dating clients or co-workers.” No co-opting the clients.

The guys kept escalating, so Sasha looked away, focusing on the screen. God, he could so use some time off from not-this. He loved the idea of The Grizzly List. Sasha sucked at working in the office.

In a perfect universe, he’d be an investor, not a peon, but everyone had to start somewhere, right? Right.

He sighed, and copied the ad to paste it into the editing software. Instead, Sasha opened his Dropbox and pasted it into a doc there.

He would do it from home. Tonight. If the guy didn’t answer, then great. The ad would go live tomorrow. That was the perfect compromise, and hey, if it gave him jack off material, so be it.

Okay. Okay, that was fair. Maybe a little sneaky, but fair.

He saved it so he would have it at home with his leftover Thai food, and glanced around one more time, the thrill of being bad racing through him.

After all, how many chances did a deaf guy get to find the bear of his dreams?

The email came in early in the morning when Trent was weighing the value of sit-ups and push-ups versus blueberry pancakes with pecans.

The ding made him glance at his phone, and Trent’s heart kicked into high gear when he saw the reply was from the office at The Grizzly List weekly, a newspaper that put bears in touch with guys interested in bears. Real and play. He thought he’d been pretty explicit that he was a real bear.

The email subject was, “Nice pic. Cuddling is my thing.”

There was a picture of the Gladiator movie cover, and then a smaller, kinda fuzzy picture of a dude. Then there was Restaurant: Thai food from Sizzling Siam.

Dark and little, little even for a human—was this guy even a bear? He was adorbs, though. Totally.

Trent hit reply. “I like it. Gladiator is one of my faves.”

It took just seconds for a response. “I know, right? Men in skirts. Studly. What’s yrs?”

“Star Wars original trilogy. Pew pew.” He grinned. Trent was a freak for A New Hope and The Empire Strikes Back. Jedi… eh.

“V. cool. I love the special effects in those.”

“I do, too. Where are you?” Was it too soon to ask? He felt good about this one.

“On the deck.” He’d been lucky enough to rent a house that backed up to a nature trail. He had this amazing deck with a view.

Oh, damn. That was one hell of a drive for a possible pickup. Too bad. This little bear was adorable.

“Down? From where? Do you like it?” The emails flew fast and quick, the little bear curious.

“Alaska. I do custom camping gear and it’s cheaper to manufacture down here.”

“Yeah? Do you like your job?” He settled in, working his butt into the grooves of his chair. He started wondering if Little Bear chatted. Texted. Liked to talk on the phone.

“It’s a job. You ever do Google Hangouts or Messenger or anything?”

“I can.” He could figure it out, right? “I could call, too. Is it too soon for that?” He wanted to hear this one’s voice. Really badly.

There was a pause in the emails and he winced. Oh, yeah. Too soon.

Julia Talbot lives in the great Southwest, where there is hot and cold running rodeo, cowboys, and everything from meat and potatoes to the best Tex-Mex. A full time author, Julia has been published by Samhain Publishing, Dreamspinner Press, All Romance eBooks and Changeling Press. She believes in stories that leave a mark, and that everyone deserves a happy ending, so she writes about love without limits, where boys love boys, girls love girls, and boys and girls get together to get wild, especially when her crazy paranormal characters are involved. Find Julia at @juliatalbot on Twitter.

For more information on other books by Julia, please visit her official website: