Hi, I’m JL Merrow, and I’m delighted to be here today as part of the blog tour to celebrate the release of Lock Nut, the fifth of my MM mysteries in the Plumber’s Mate Mystery Series.  In Lock Nut, a simple hunt for a missing husband turns into a chase after a murderer when a body turns up in a local canal—and slightly psychic plumber Tom Paretski ends up with his face on TV as the prime suspect! Meanwhile, wedding bells are ringing all over the place… 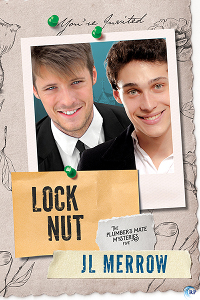 Tom Paretski, plumber with a talent for finding hidden things, and his private investigator fiancé Phil Morrison have been hired to locate a runaway husband, Jonathan Parrot. The job seems simple enough—until their quarry turns up dead in a canal, and a photofit of Tom’s face is splashed all over the news, making him chief suspect.

The widow, petite ex–porn star Lilah Lovett, is convinced her husband was killed by his gay lover, but Tom and Phil aren’t so sure. Worried they may have precipitated Jonathan’s death, they’re determined to find the real killer. But with a web of incestuous ties linking the suspects, it’s hard to know who to trust. Especially when a second victim dies a gruesome death.

Meanwhile, with their wedding looming and them sharing a house now, Tom’s worried it may all be too much, too fast. The last thing he needs are the mixed messages Phil seems to be sending out. They’ll need to get back on the same track if they want to make it to their honeymoon together—and alive. 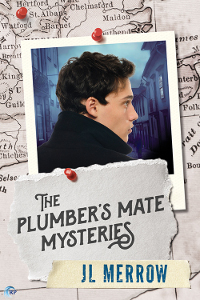 About The Plumber’s Mate Mysteries

A plumber with a hidden talent and an ex–school bully who’s trying to atone for his past. This unlikely crime-solving duo could be the worst thing that’s ever happened to the murderers of rural Hertfordshire, England.

All his life, cheeky plumber Tom Paretski’s had a sixth sense for finding hidden things. Mostly it’s brought him nothing but grief, but ever since tall, blond, and broody Phil Morrison stomped back into his life, Tom’s been using his psychic talents to track down killers. He’s shocked to find himself falling for the man he used to hate.

Phil’s an ex-cop turned private investigator who can’t forgive himself for the pain he caused Tom in their shared schooldays—especially his part in an accident which left Tom with a lasting limp. Finally able to face up to his feelings for Tom, Phil’s determined to make amends. Just as long as the murderers who won’t stop crossing their path don’t rob him of the chance to do so for good.

The path of their investigations may not run any smoother than their love life, but with the help (and hindrance) of a motley crew of friends and family—including the world’s campest campanologist and his ex–porn star lover—with any luck Tom and Phil will continue to get their man.

Publisher’s note: Each book in this series stands alone as a murder mystery, but the series as a whole follows Tom and Phil’s romantic journey from enemies to lovers, and beyond. It’s recommended, but not essential, to read the books in order.

To celebrate the release of Lock Nut, JL is giving away a $10 Amazon gift card! Leave a comment with your contact info to enter the contest. Entries close at midnight, Eastern time, on May 19, 2018. Contest is NOT restricted to U.S. entries. Thanks for following along, and don’t forget to leave your contact info!