You are here: Home / New Releases / Loved By The Beast by Anya Summers (@AnyaBSummers @goddessfish) #giveaway

Anna has plans for her life. This fall, she will be heading off to medical school, well on her way to becoming a doctor. But first, she and her besties head to Ireland to celebrate.

Nowhere did her future plans even include serious dating, let alone becoming mated to a man who can turn into a freaking beast with wings. Nor did she reckon with being sucked through a portal onto another planet while on her way home from a great night out.

Yet from the very first time her new mate touches her, Anna wonders if this could be the real deal – as in: the big L. The only problem is, her mate says his kind do not love; they protect, they pleasure, and they provide. Can Anna really kiss goodbye to all her plans for the future, and agree to spend the rest of her existence without love?

Publisher’s Note: This steamy paranormal romance, while the third in the Alcyran Chronicles series, can be read and enjoyed as a standalone. 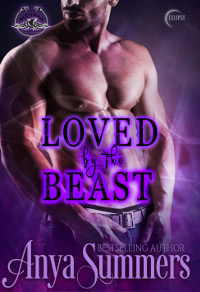 His nose caught a whiff of sweetness on the breeze. The potency and flavor reminded him of dragonsbane wine. Being surrounded by the foreign stench, his beast wanted to roll around in the familiar scent.

He scrutinized the pavement below.

Then he spotted his prey. The women walked three abreast down a deserted lane, swaying slightly as they trod. He inhaled a giant whiff, needing to be sure. His people needed him to finish this task and succeed. Rhiannon had been correct. Their scent held trace amounts of Clovis blood, mingled with that of the people of this planet. It confused his internal sensors, made him want to call them Clovis—but they were not. They had far too much of Earth inside them. Their Clovis scent was so faint and diluted, if he had not been searching for that in particular, he would have missed it.

He swooped down near the trio. His senses were on high alert. He homed in, soaring near their location. One of the women, a black-haired wench with hair that fell to her waist, glanced skyward, lifting her face toward his position, and emitted an ear-piercing scream.

That face. Even in the dark he could discern her beautiful porcelain features, the arched brows, slim upturned nose and pouty lips that were presently drawn in abject terror. A lightning bolt of energy struck D’Vorak’s system. His wings stretched. His dick woke like a sleeping giant, straining against the confines of his leather britches. His entire being bellowed: mine. That, at long last, he had found his mate.

The urge to rut until his seed emptied into his mate’s sex and his staff became flaccid surged through him. It overrode his every thought. He had to claim her, bind her life force with his and plant his offspring in her belly.

The thought of being with his mate after believing he was doomed to walk alone made his head swim. He was exultant. Desire thundered through his veins. His blood roared.

And then his mate and the other two women sprinted away. D’Vorak snarled. How dare she run from him? She belonged to him, now and until the end of their days. Like they could outrun him.

He shot after them, weaving his great wings between buildings as he flew, speeding closer and closer. He grinned when they took the dead-end with the entrance to the portal. Rhiannon had said the women would be drawn to the magic of the vortex, that their blood would recognize the magic and it would act like a tether, leading them to it. The trap had been executed to perfection.

D’Vorak looked at the woman, his mate. She was a sprite of a thing, lush where it counted, and he felt himself nearly coming out of his skin at the sight. She was his mate, all right. His body and being exhibited all the signs. His feet touched down upon the firm, stone ground. Not breaking his forward momentum, he stalked forward. Voracious need battered his every footstep. He wanted to shake himself. It had been hundreds of years since any of his kind had found their mate. They slaked their lust on their harems full of concubines to quell the rising madness within. Every aspect of his being bellowed that he must take her, bind her to him at once.

Anya is a bestselling and award-winning author published in multiple fiction genres. She also writes urban fantasy, paranormal romance, and contemporary romance under the name Maggie Mae Gallagher. (http://www.maggiemaegallagher.com/) A total geek at her core, when she is not writing, she adores attending the latest comic con or spending time with her family. She currently lives in the Midwest with her two furry felines.