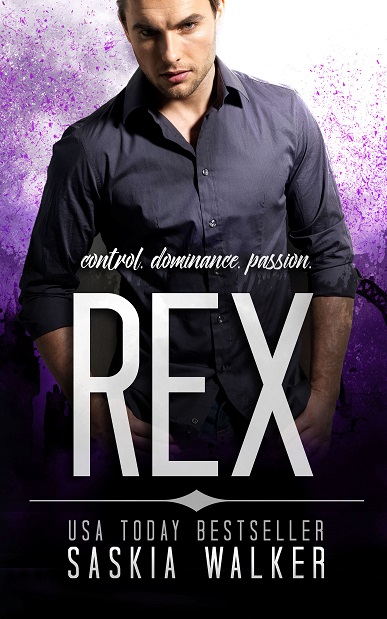 Rex Carruthers can have any woman he wants, but he wants only one – his stepsister, Carmen Shelby. Their desire was once forbidden, and Rex walked away from his heritage as a result. Now, the reading of a will brings them back together, and Rex has something Carmen wants – his birthright, the stately home, Burlington Manor.

Carmen Shelby is haunted by her desire for her stepbrother, Rex – a dangerous, masterful player, the man who broke her heart. Then Rex makes an outrageous suggestion – he will give her the Burlington Manor Estate, in exchange for the affair they were denied.

Carmen must risk her fragile heart and explore a new, submissive sexuality with Rex, a natural Dom. She quickly discovers Rex may be her true master, but can he control the powerful family secrets that both drew them together – and threaten to tear them apart. 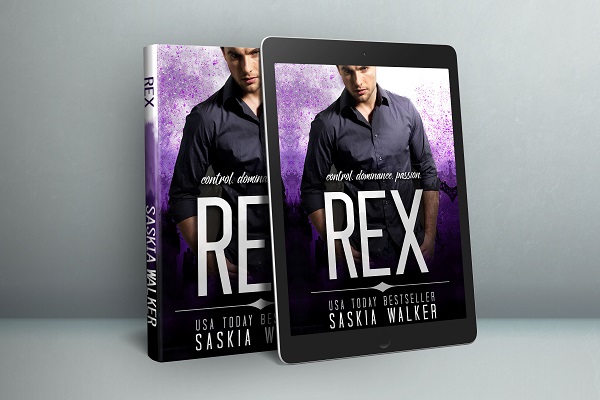 Carmen’s attitude triggered something dark in Rex. Something that was hungry and demanding to be fed. “Crawl to me,” he commanded.

Carmen’s head dropped back as if she’d been physically slapped.

The urge to push her some more roared in on him, taking charge. He strode to the chair where his clothes lay abandoned from the night before.

Swiping up his jeans, he fished into the pocket. He tossed the key chain out across the floor, holding on to the end of the long chain. “Get down on your hands and knees and crawl over here for it.”

When the key landed on the Persian rug, she stared down at it.

Rex jerked on the chain.

“Show me what you want, what you came here for,” he said.

“I want to know exactly what you wanted when you stepped through the door. The truth.”

“You can, because you want the Manor, and you agreed to do whatever I said to get it.” Would she use the safeword? Would this push her humiliation trigger just that bit too far? He didn’t care, as long as it got the truth out of her. He had to know. “Why are you here? What did you want? Just the property?”

“Yes.” She dropped onto her hands and knees. Her voice was weak, forced. “It’s a fair exchange, that’s what you said.”

The light outlined her body, drawing his eye to her curves.

She moved suddenly, jerking forward and crawling toward the key, but she was in turmoil. He could sense it. He could see it.

The sight of her that way made him painfully hard and yet his sense of frustration only grew. He wanted to understand this woman more than anything in the world.

When she got to it, her hand wrapped around the key, but she stayed there, shifting uneasily. The light from the window fell across her naked form, delineating the arch of her waist and the curve of her hip. Her soft skin glowed in the morning light. In contrast, her face was shadowed by her hair as it fell forward, and she looked up at him like a wild creature, her eyes blazing.

“Tell me why,” he demanded, and he held tight to his end of the key chain.

Her body rippled, her back arching. Her head swung to one side. She whimpered. Taking a deep breath she moved again, gathering the chain up in her hand as she went.

“Just the house?” he asked. “That’s all you wanted? You were that mercenary?”

She froze, then sat back on her heels. Her breathing was labored. She was battling inner demons.

He pressed her further. “Why is this so hard for you to talk about?”

“Because I’m scared.” She stared up at him, and her eyes looked wild.

Rex swallowed. “Why are you scared?”

Her eyes flashed shut. “Because I wanted you.” Her voice was scarcely above a whisper “I didn’t realize how much, at first, but I came here because I’ve always wanted you.”

He let go of the key chain, throwing it down on the floor, and clicked his fingers. “Then come to my side.”

She moved fast, kneeling at his feet, her arms wrapping around his thighs. The key and its chain lay abandoned on the floor. Rex stared down at it, assuring himself of what had occurred.

She clung to him, and he felt damp tears against his skin. “Please don’t tease me about it.”

Rex let his head drop back, relief barreling through him.

Grateful, and empowered, he stroked her head possessively, admitting to himself that a month would never be enough. 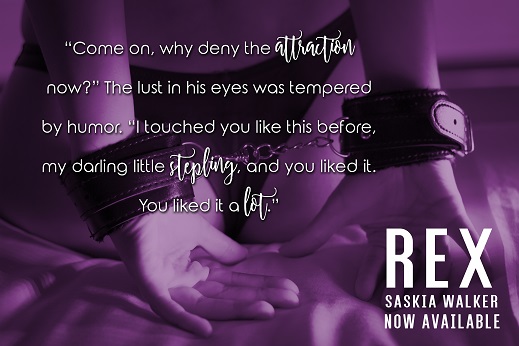 Saskia Walker is a USA Today Bestseller and award-winning author. Her short stories and novellas have appeared in over one hundred international anthologies and several international magazines, including Cosmo, Penthouse, and Bust. After writing shorts for several years Saskia moved into novel-length projects.

Fascinated with seduction, Saskia loves to explore how and why we get from saying “hello” to sharing our most intimate selves in moments of extreme passion. Her novels Double Dare and Rampant both won Passionate Plume awards and her writing has twice been nominated for a RT Book Reviews Reviewers’ Choice Award. She has lots more stories in the pipeline! Saskia lives in the north of England on the edge of the Yorkshire moors, with her real life hero, Mark, and a house full of felines.

or keep in touch using the following links: