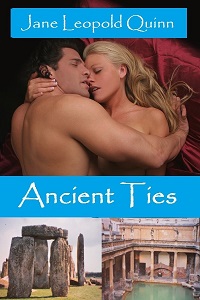 Nursing a broken heart, Janney Forrester flies to England for a much needed vacation. She gets one—and much more. A drive through the countryside and the sight of a mysterious heavy gold bracelet found nestled against ruined walls draw her across the crumbling stone threshold of an ancient villa where she beholds a Roman room in perfect historical detail. To add to the unreality, there’s the most gorgeous, masculine man she’s ever seen, her every sensual fantasy personified. Confusion by what’s happening to her vies with attraction when Janney is thrust two thousand years into the past.

Roman soldier Marek Benin Verus considers the woman suddenly appearing before him as a gift from the gods. Zeus knows he needs one! Battle fatigued and emotionally scarred after fifteen years in the army, he’s on a leave of absence and has all the time in the world to devote to seducing this beautiful woman into his bed. He doesn’t plan on the powerful and dangerous emotions she inspires in him.

Marek’s hard, muscular body is too luscious to resist. Janney decides to risk the comfort of her safe life and carpe diem—seize the day. Marek seizes her body and takes her to the edge—and over—to an ecstasy she never knew existed. Can a new world for her, timeless desire, and a loving exploration of each other’s bodies forge a passion that survives centuries of separation?