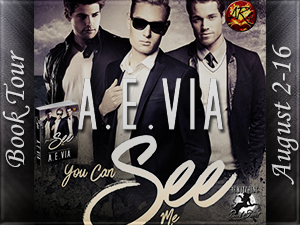 It takes more than perseverance to recover from tragedy…you also need love.

Following a horrific accident that leaves him blind, renowned chef Prescott Vaughan loses his fiancé and all hope for his career. Recovery and confidence in his skills come slowly, along with feelings he hasn’t experienced in a long time when he meets his new neighbor, Dr. Rickson Edwards.

Unlike Prescott, Ric is open about his attraction to men yet has issues that complicate their relationship. A brief separation threatens his hopes for an eventual reunion when Prescott befriends the handsome aspiring chef Blair McKenzie, who wants more than cooking advice.

Ric doubts Pres can let go of the charming southerner, but after an encounter with the sinfully sexy man, he can’t help his attraction as well. Pres feels he must choose but realizes…does he have to? 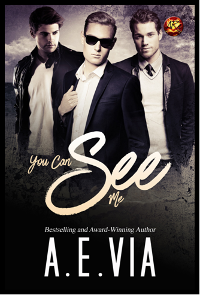 Pres didn’t want to think about being lonely anymore. Last night he’d eaten his langoustine lobster alone when his girlfriend never showed up after happy hour. He’d called her a couple times, but it went straight to voice mail.

The next morning he’d done his usual Friday morning workout with his personal trainer and worked on some reviews since he didn’t go into the office. In the afternoon, he did meaningless organization in his kitchen pantry and marinated some pork tenderloin for dinner.

Cooking always made him feel better. He only wished he had someone besides himself to enjoy it, too. He’d even gone as far as giving his neighbors Jeff and Cindy a couple dishes, just to hear a few compliments. How pathetic.

While he waited a few minutes to cook his meat, he sat at the kitchen island and listened to an audiobook his dad had given him. Josey came over and whined at him, laying his heavy head on his knee.

“Sorry, boy. You need to go out, huh?” Pres got up and moved quickly and effortlessly to his bedroom to change into something a little more comfortable. Josey whined some more. “Okay, okay. I’m coming, Josey.”

Pres slid into his Jordan flip-flops and grabbed a plastic doggie-poop bag and the leash from out of his hall closet. He took his keys off the hook, grabbed his long cane, set the alarm, and left his condo. He didn’t need to put Josey’s harness on. They’d walked this path for over three years now, and he knew it well.

As Pres waited for the elevator, he felt a presence next to him. It was a male presence because the scent was spicy with a sweet undertone. Just when Pres prepared to speak, his visitor spoke to him first.

“Hello,” he said in a deep, sultry voice.

“Going for a little stroll, huh? He’s a beautiful dog. May I pet him?” asked the good-smelling stranger. His accent was slightly northern but not overly pronounced. Listening to him speak made Pres think about what the man’s mouth might look like. If a person had a strong voice, he immediately pictured a warm, inviting smile covered by full lips.

“Yes, go right ahead. He’s very spoiled. Any attention he can get, he’s more than willing to take.” Pres lifted Josey’s leash, making him rise up off his belly.

Pres could hear the man ruffling Josey’s scruff underneath his collar as he scratched him.

“So do you live on this floor?” Pres figured he’d spark a little conversation since the elevator was taking forever.

“Yep. Actually, just a few doors down from you,” he replied happily.

“You know where I live? Well, now I have to kill ya,” Pres joked, hoping his neighbor had a sense of humor, which he did because he heard him let out a genuinely deep laugh.

With a laugh like that, he definitely has a nice smile.

“Funny guy, huh? My name is Rickson Edwards, but everyone calls me Ric. I’m sorry I haven’t introduced myself sooner, but I’m fairly new to the building, and every time I see you, you’re either just getting on or off of the elevator.”

He felt Ric take his hand that wasn’t holding Josey’s leash and slide his into it during his introduction. Damn, he has a strong handshake.

“How respectful of you, but there is no Mr. Edwards, just Ric…Mr. Vaughan.”

Pres mocked him right back. “How respectful of you, but Mr. Vaughan lives in Richmond with my mother, just Prescott, or Pres, if you like.”

“I do like…I mean the name. I like your name,” Ric stammered.

Pres smiled as he imagined a slight blush creeping up on the man’s face.

At its arrival, they both stepped into the elevator, leaving the introduction awkwardness in the hallway. Neither said another word. There was only the humming of the elevator gears as it descended its way to the lobby.

Pres was overly aware of Ric’s gaze on him, and it made him smile.

“Why are you smiling?” his neighbor asked.

“Why are you staring at me?” Pres retorted.

“Because you’re—” He stopped quickly.

“Because I’m what?” Pres questioned, wondering why Ric didn’t finish his sentence.

“Nothing. Didn’t mean to stare, and I’m not even going to ask how you knew that I was, either.” He laughed.

“It’s within my power,” Pres joked back.

Pres found himself trying to imagine what Ric’s face looked like. If the appearance matched the voice and humor, then he probably had light brown hair and light green or hazel eyes. His cheekbones could probably make a woman envious, and he didn’t breathe heavily, so Pres assumed he didn’t have any weight issues. His voice came from slightly above Pres when he spoke, so the man was taller than him, making Ric probably six-foot-two or three. Being closed in the small compartment had Pres’s sensitive nose filled with Ric’s unique scent. It had him feeling dizzy and a little disoriented. That spicy, sweet combination was like nothing he’d ever smelled before. He liked it…a lot.

That thought did not freak out Pres at all, and liking the man’s smell was an interesting feeling for him. He wasn’t squeamish that a man had given him such a sensual reaction. If he was going to be totally honest with himself, everything he did when he was in his fraternity didn’t scream hetero from the word go, but that was over twelve years ago. Pres had not met a man he was attracted to since…until now.

The elevator doors opened, and Pres extended his hand, telling Ric to go ahead and exit first.

“You’re welcome. It was nice meeting you, Ric. Have a good evening.”

Pres walked through the lobby having a nagging urge to turn around and look back. But that was fucking pointless…right?

When she’s not clicking away at her laptop, A.E. runs a very successful paralegal-for-hire business and in her spare time, she devotes herself to her family – a husband and four children – her two pets, a Maltese dog and her white Siamese cat, ELynn, named after the late great gay romance author ELynn Harris. While Blue Moon is her first novel, she has plenty more to come…so sit back and grab a cool drink, because the male on male action is just heating up!