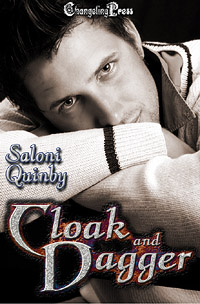 CLOAK AND DAGGER (WEAPONS OF REDEMPTION 3)

When police detective Bryce Tarunson arrests a man who’s identical to his lover from two thousand years ago, he’s pulled closer to the vampiric master he hates.

Vampire hunter Shane will do anything — including tempt a vampire — to rescue his brother who has fallen into enemy hands. He doesn’t believe he’s capable of falling for the object of his seduction, until he meets Bryce.

The bond between Bryce and Shane forces them into a battle that might end in the destruction of the Weapons of Redemption.