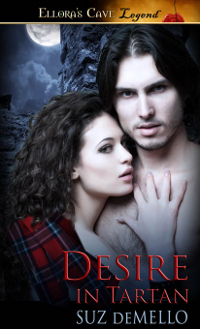 Dugald Kilburn was sure that he’d never find love. And why should he?

‘Tis rare for vampires and their mates to reproduce successfully and Dugald kens that. He’s certain his lust caused his first wife’s death in childbed.

Innocent Alice Derwent presents Dugald with a dilemma. She’s different than any woman he’s known, different and altogether alluring. And while the lady is innocent, her feelings are anything but.

Will he bed and wed the lady, risking her life? Or remain celibate, sparing her?

But when threatened with death, Alice decides she doesn’t want to die without knowing Dugald’s love. Can he resist her charms?

Book Two of the Highland Vampires series from Ellora’s Cave

Dugald left most of his company of men back at the inn with strict instructions to stay out of trouble, but he had no illusions. The men would drink as much as they could hold before finding the loosest bits of muslin available. If they were still able to perform, perform they would, as long and as hard as possible. He hoped that he’d be able to rescue the less experienced of the lot out of whatever scrapes they fell into. The youngest, Malcolm, came with Dugald as his companion. He wouldna leave Malcolm in the care of the rest.

The mop fair was a mad scene. ’Twas combined with a street fair and a farmer’s market, so the entire population of Glasgow had seemingly crowded itself into the square with a market cross in the center. Food stalls, redolent with the spicy aromas of roasting fowls and sausages were fronted by cooks and ’prentices bawling out the prices of their wares. Nearby, penned livestock emitted a less appealing miasma of straw and shite, with the autumn wind swirling the scents along with dry leaves.

Turning to Malcolm, Dugald raised his brows. Without speaking, the two Kilburns started to walk along the disordered rows of booths. Once they’d passed the food stalls, the fair became even more riotous, with knots of maids and men looking for hire, screeching their qualifications. Each brandished a tool of his or her trade, cooks with rolling pins or wooden spoons, coachmen with their whips. Country girls in their Sunday dresses crowded in a knot, peering anxiously at well-dressed passers-by whom Dugald guessed were the stewards of the grand houses. Every once in a while one would stop and question a rosy-cheeked lass, occasionally leaving the fair with a new maid or tweeny in tow.

He stopped, arrested by a sweet fragrance that rose from the reek of unwashed bodies like clean mist drifting on the surface of a loch. He hadn’t detected it before. Mayhap it had been cloaked by the pungent roasting sausages and the other scents at the food stalls—herbs and the like.

He lifted his face into the air and sniffed. Yes, ‘twas there, elusive but definite.

Malcolm did the same. “I smell it too.”

The stripling looked mystified. “A sweet smell means a governess?”

“Milady gave me questions to ask.” Dugald patted his sporran. “If she passes, she’s the one. But this is how we’ll be finding her.”

At the end of the row of coachmen, stable hands, maids and cooks fluttered a gaggle of…what? Somberly robed figures resembling a flock of giant crows or, mayhap, vultures. Exuding the stinks of mothballs and body odor, they all appeared to be flapping about one small, drab figure, a female who couldna contrast more with her oafish companions.

Dugald’s first impression of the woman was of narrowness, so at odds with her tempting scent that all he could do was stand and gape at her like a looby. Dressed in unrelieved black, she had slender shoulders and a tiny waist. Slight hips. When she turned, he could see she possessed but a small bosom. He raised his gaze and didn’t bother to stifle a gasp at the sight of her pure and perfect profile. Intelligence sparkled in her hazel eyes, completely belying the rest of her dull demeanor.

Her face… He could stare at that face forever without a single moment of boredom.  Pale, though not as white as a Kilburn’s, for a smattering of freckles spattered the bridge of her straight little nose and sprinkled her high cheekbones. She had well-cut lips with a definite Cupid’s bow, the one distinct curve on her serious face. A semi-circular half-moon dip.

He wanted to slide his tongue into that dip before kissing her with every mite of passion he possessed.

Best-selling, award-winning author Suz deMello, a.k.a Sue Swift, has written over sixteen romance novels in several subgenres, including erotica, comedy, historical, paranormal, mystery and suspense, plus a number of short stories and non-fiction articles on writing. A freelance editor, she’s worked for Total-E-Bound, Liquid Silver Books and Ai Press, where she is currently Managing Editor. She also takes private clients.

Her books have been favorably reviewed in Publishers Weekly, Kirkus and Booklist, won a contest or two, attained the finals of the RITA and hit several bestseller lists.

A former trial attorney, her passion is world travel. She’s left the US over a dozen times, including lengthy stints working overseas. She’s now writing a vampire tale and planning her next trip.

Find her books at http://www.suzdemello.com

For editing services, email her at suzswift@yahoo.com

She tweets her reading picks @ReadThis4fun

Her current blog is http://www.fearlessfastpacedfiction.com