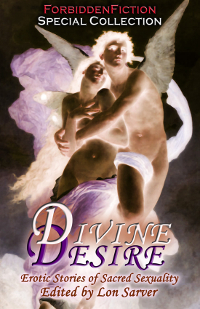 There’s a reason people often cry, “Oh, God,” in the throes of passion.

Rise beyond the limits of mere mortality, and partake of Divine Desire.

In the morning I attended the slave market with Captain Dugarry, who met with the auctioneer, Monsieur Richelieu, and some plantation owners. The slaves had now taken to rocking feverishly on the deck, their eyes rolling up into their heads showing only the whites. Monsieur Richelieu was adamant. He would not keep them in the slave market for any longer than a week. The plantation owners were quite clear; they would not buy any slaves in that condition. Basically, Dugarry had been told the whole cargo was worthless unless he could do something to restore calm.

“They are possessed, Capitaine,” Monsieur Richelieu told Dugarry.“There’s no point denying it. You may not believe it, but on St Domingue, we see this many times. But, I must say I’ve never seen a mass possession like this before. You may laugh at me Capitaine, but you have to get help from one of the Guede.”

My ears pricked. I was uneasy. I had heard of the power of the Guede from other sailors, though whether their tales of witchcraft and madness were true or exaggerated nonsense I could not say.

Monsieur Richelieu explained the nature of the Guede: they were intermediaries between the living and the dead. Only one of them would have the power to cross over into the spirit world and release the slaves from their possession. Dugarry scoffed. He still didn’t believe these superstitious tales, but really had no choice. As Monsieur Richelieu told him, in this state, his whole cargo was useless. He might as well throw the whole lot of slaves off the harbour and drown them.

Reluctantly, Captain Dugarry had been persuaded. “So, tell me Monsieur, where do I find one of these Guede?”

The slave market auctioneer explained, but first issued a warning. Seeking the aid of the Guede was dangerous; they were powerful and capricious and would not offer their assistance lightly. They would expect a handsome reward for their services.

The captain replied, “That’s no problem. I’ll get plenty of gold sovereigns from the sale of the slaves. The survival rate on this crossing has been good.” God, I thought, I hate to think how many dead slaves would be thrown overboard on a bad crossing.

Monsieur Richelieu continued. “There’s one powerful Guede who can be sought in the mountains inland from Port-au-Prince; that’s Maman Brigitte. It’s perhaps a day’s journey there and back on horseback.” The captain asked how she could be found. Monsieur Richelieu looked into his eyes and said, “you do not find her, she will find you, if she wants to parley with you. Go into the mountains and trust to fate.”

Dugarry was exasperated. “Fuck, monsieur, you expect me to go up into these god-forsaken mountains on a gamble that some mad witch woman might speak to me?” Richelieu rolled his eyes and shrugged as if to say, you asked my advice. “Merde,” exclaimed Captain Dugarry. “Monsieur Gerard, let’s get some horses. We’ll set off tomorrow.”

What further journey into the heart of darkness will my travels take me? One last voyage, one last simple expedition was all I asked, and what did I get? A cruel captain who had drawn me into his sadistic games, a shipload of possessed slaves, and  now this trip into the mountains for an encounter with a woman who could cross over into the spirit world.

When we returned to the ship, old Pierre definitely had a view. “Capitaine, you are going to see Maman Brigitte. You will parley with the goddess of death. You are a crazy man. She will suck all of the life out of your soul, and leave you an empty shell. You are taking a terrible risk. Monsieur, if I were you, I would rather throw the bastard slaves into the sea and cut my losses than meet with one of the Guede.”

Dugarry told him to fuck off and stop repeating old wives’ tales, and stormed off.