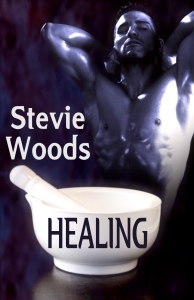 After an injury, Audin desperately needs the help of a healer, and is shocked to discover the one recommended to him is Tener, a man he hasn’t seen since their split following a blazing argument a dozen years earlier. Since those days, both men have experienced much during their years apart, and life has tempered them. Even though Tener is now a healer rather than the doctor he ought to have become, and Audin is an engineer working for an authoritarian government department, they realize they still have much in common. Including a fierce sexual attraction to each other.

Upon learning that Audin’s life is at stake from an implant placed inside him by the government, and with his own career at risk due to Audin’s position, Tener confesses his secret involvement with an underground organization fighting to bring down the corrupt and dangerous regime.

The men quickly comprehend that they must work together, hoping to solve Audin’s problem and, in consequence, that of others infected by the vicious piece of technology. But can Tener remove the evil device from Audin without killing him in the process?