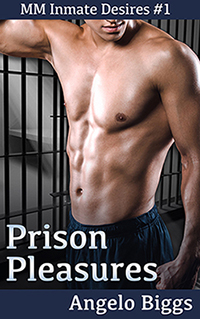 for commissary loans, Matteo realizes that the young guy is purposely trying to get in over his head. Although Billy has a tough demeanor, he let’s Matteo know in his own cryptic way that he’s gay and eager to explore some ‘prison pleasures’. Before long, Matteo and his muscular Brazilian friend Luiz both find themselves heading towards sizzling encounters with the sexy young man.