Ginger Holtzman has fought for everything she’s ever had—the success of her tattoo shop, respect in the industry, her upcoming art show. Tough and independent, she has taking-no-crap down to an art form. Good thing too, since keeping her shop afloat, taking care of her friends, and scrambling to finish her paintings doesn’t leave time for anything else. Which … is for the best, because then she doesn’t notice how lonely she is. She’ll get through it all on her own, just like she always does.

Christopher Lucen opened a coffee and sandwich joint in South Philly because he wanted to be part of a community after years of running from place to place, searching for something he could never quite name. Now, he relishes the familiarity of knowing what his customers want, and giving it to them. But what he really wants now is love.

When they meet, Christopher is smitten, but Ginger … isn’t quite so sure. Christopher’s gorgeous, and kind, and their opposites-attract chemistry is off the charts. But hot sex is one thing—truly falling for someone? Terrifying. When her world starts to crumble around her, Ginger has to face the fact that this fight can only be won by being vulnerable—this fight, she can’t win on her own.

Small Change is the first book in a series that will include M/F and M/M romances. 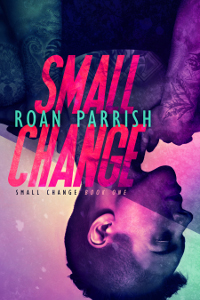 He was tall, with the thick build of someone naturally powerful, rather than the kind of sculpted muscles of someone who worked out in a gym. His thick red hair was cut close on the sides and long on top, combed back from a square hairline. He had a strong jaw and a smirky mouth, and his stubble was nearly blond. It was his eyes that I couldn’t look away from though. They were almost the same color as his hair—a warm goldish-orange—and shot through with flecks of blue.

My first impression was that his face was arresting, interesting the way sometimes in a gallery there’s one painting that pulls you in and won’t let you walk past. Each line eases into the next, each color shades into the one beside it in just the way your eye desires. Once you start to see the details you can’t look away.

But the more I looked, the more interesting converted to handsome as hell.

“Dramatic start to the day,” he commented, eyes sliding to the spot where I’d been crouched when he came in.

“Not even my first encounter with a floor this morning, unfortunately.” I leaned an elbow on the counter, drawn toward him.

“One of those, huh?” He spoke with the ease of a food service professional accustomed to such exchanges, and the utter empathy of someone who actually meant it.

When he held the bag out to me over the counter it was accompanied by an easy smile that crinkled laugh lines at the corners of those extraordinary eyes and displayed charmingly sharp incisors that overhung his bottom lip a little, like a kid wearing dress-up fangs.

“Just in case the vagaries of your day find you needing another one,” he said.

And then he winked at me. Not the friendly wink of a barista. A filthy, promise-laden wink that shifted his grin from charming to sexy as hell. 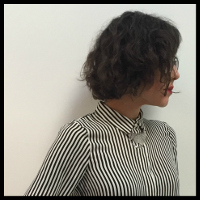 Roan Parrish lives in Philadelphia where she is gradually attempting to write love stories in every genre.

When not writing, she can usually be found cutting her friends’ hair, meandering through whatever city she’s in while listening to torch songs and melodic death metal, or cooking overly elaborate meals. She loves bonfires, winter beaches, minor chord harmonies, and self-tattooing. One time she may or may not have baked a six-layer chocolate cake and then thrown it out the window in a fit of pique.

She is represented by Courtney Miller-Callihan of Handspun Literary Agency.