You are here: Home / New Releases / No Flag by Liz Borino (@goindimarketing) #giveaway

Captain Mike Kelley does not ignore his intuition, so when sexy bartender Will Hayes captures his heart, Mike embarks on a mission to win him over to a Domestic Discipline relationship. Will accepts with one caveat: Mike must promise not to renew his army contract.

Mike agrees, until the army invokes the stop-loss military policy to involuntarily extend his commission and send him back overseas, rendering him powerless and threatening everything he and Will have built. Will, left alone to cope with a new café, must rely on the support of old friends who may no longer be trustworthy.

A horrific terrorist attack on Mike’s outpost changes everything, leaving them both at a loss.

Mike awakens in a hospital with a devastating injury and no recollection of the attack. As the only survivor, his memory may be the key to national security. Mike struggles to cope with his injury and Will struggles with his new role in Mike’s life.

For Mike and Will, “No Flag” meant “come home alive.” Will has Mike back rather than a folded flag, but in the aftermath of war, can they rebuild the life they had before? 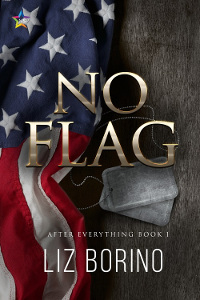 Bombs exploded on the evening news, one after the other. Body parts flew past the camera. The headline across the bottom of the screen read: “20 Army Intelligence Officers Dead.”

Will Kelley squinted as the fuzzy security images played behind the woman’s head, searching through the chaos for reassurance. Nothing. His heart pounded and he tried to swallow but found only dry air in his mouth and throat. The female reporter described the weapons used and structural damage done in vivid detail, which made for sensational television, but failed to answer any questions for the people at home. Victims’ families had to be notified before the media could release their names. So, Blondie would lose her job if she read the list in front of her.

“What the hell are you doing, man? We open in thirty minutes and you’re watching television?” Seth, his roommate, demanded from the doorway of the living room.

“Answered your own question, didn’t you?” Will responded.

“No.” Will did not take his eyes off the screen. “I’ll drive myself.”

The report flashed to an increase in allergies in children, so Will switched to another station while typing “Attack on American S2 Building in Afghanistan” into Google. It wouldn’t be that easy though. So, Will tried several more combinations of search terms before finding a video shot by an insurgent involved in the attack. The camera shuddered. Focused on different areas of the chaos. Men ripping clothes off soldiers. Looting. Bodies blown to bits. A man removing computer hard drives. And only one face. On the severed head of Major Evans.

“Will!” Seth jabbed him in the shoulder with a pen. Will forced his eyes away from the computer. “What happened?”

Will took a slug from the nearby water bottle. “Who? No one will talk to me. I’m not my husband’s family.”

Seth stared at him for a long moment and said, “I’ll have Casey cover for you.”

Will stood and shook his head. “Why? I can’t do anything here except watch the same videos over and over. May as well see if I can make some money.” He shut his computer and set it on the side table. “Meet you there. I won’t be too late. Promise.” He had to stop himself from scoffing as the meaningless word left his lips.

“You wanted me to move, I’m moving! Go. I’ll be there.” He walked toward his bedroom, Seth’s gaze burning into his back. Stopping to throw a glance over his shoulder, he added, “Don’t tell Casey. I can do without her mother-henning me.”

“Thanks.” Will climbed the steps and closed his bedroom door. He leaned against the wood cutting him off from the rest of the world. His gaze roamed the four walls decorated with art prints, a whiteboard, and his wedding picture. Will strode over and fingered the golden frame. Behind the glass lay a photograph of Will and Mike in tuxes in the middle of their first dance. Their smiles easily outshone the gold on the frame. Mike had always been handsome with broad, built shoulders and muscular pecs, leading to abs you could grate cheese on.

But none of that stood out to Will, not on their wedding day of the year before. Mike’s blue eyes radiated a strength and hope. Will removed his wedding band to read the promise inscribed: No Flag.

Please keep your promise, Mike, Will thought as he took a deep breath and tore himself away from the picture and the crushing memories it brought. He had a job to do tonight.

Liz Borino has been telling stories of varying truthfulness since she was a child. As an adult, she keeps the fiction on the page. She writes stories of human connection and intimacy, in all their forms. Her books feature flawed men who often risk everything for their love.

When Liz isn’t writing, she’s waking up early to edit, travel, and explore historic prisons and insane asylums—not (usually) all in one day. Liz lives in Philadelphia with her two cats.