Owen Lipke is looking for adventure. When he hears about a ranch in the Muskokas catering to kinky men who don’t want to settle for backroom amateurs, he signs up in a second.

At the Braided Crop Ranch, Owen finds what he’s looking for: A sex-positive space with safety protocols and Doms (trainers) who know their business. And a stable full of well-behaved ponyboys to prove it.

Owen thinks his trainer, Kamal, is hot as hell but finds being a ponyboy isn’t as intuitive as he expected. As he struggles to learn the basics of equine pet play under the firm hand of his trainer, he finds himself falling for the experienced older man.

And perhaps Kamal is developing a thing for the young, adventurous newcomer. But there are rules about fraternizing with staff at the ranch. And Owen wonders if it’s wise to fall in love with the pragmatic trainer who unravels him layer by layer to expose his deepest needs and most secret proclivities.

But perhaps wisdom is overrated. And maybe the rewards of adventure are only achieved when you abandon caution and take a huge leap of faith. 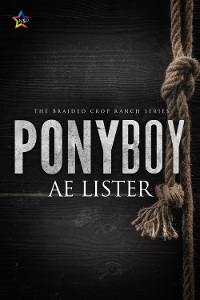 Shadows and dim lighting made the inside of the club appear deceptively edgy. The Stocks boasted a selection of the most overrated brews and clientele in the city, in my opinion. But this particular club was one of the few places I could go to try to find the kind of man I was looking for.

“Hey, Lipke, what are you doing here again?” Sandro smiled, clapping a hand on my shoulder and taking the stool next to me. “I thought you had the real deal? You know, a nice cozy apartment with your man.”

“We broke up,” I said, staring at the bar and trying not to let the fact I didn’t feel much disappointment about the end of my relationship bother me.

“Ah, shit, that’s too bad,” Sandro replied, but I saw a glimmer of satisfaction in his eyes as he motioned to the bartender. “Hey, a drink for my buddy here, Paulo.” He turned back. “What are you having, Owen?”

I shook my head and tossed the dark hair out of my eyes. It was getting way too long in front. I’d been meaning to get it cut, but I was so unmotivated to do anything these days. “Thanks, but I’m hoping for some action tonight.”

I never trolled for Doms with alcohol in my system. I’d learned that lesson a long time ago.

He was trying to butter me up because he wanted to hook up. He’d tried with me before, but I had been in a relationship that didn’t allow for “extras” so I’d had an excuse to turn him down.

“A Coke for Owen, please. And a ginger ale for me,” he said, throwing a tenner on the bar.

“Thanks,” I said again, looking Sandro over and wondering if he could give me what I wanted.

He wasn’t a bad-looking guy; a little heavier in the gut, but it worked for him. He had a decent “Daddy” vibe going on and appeared to be pushing forty. Maybe he had the experience to give me something…more. Something solid and demanding and ruthless.

The Stocks was an underground fetish bar, where I’d come innumerable times to find the type of hook-up I was after. But anyone I’d ever gone home or played downstairs with, had disappointed. It wasn’t operating on the down-low. The club was literally underground, which made it even darker and dingier inside than most places—almost claustrophobic.

I’d had a connection with Simon, my ex, but even he couldn’t give me what I wanted in the end. I couldn’t define that particular desire but I knew I hadn’t fulfilled it—ever.

At night I’d dream about a Master who took total control, put me in my place easily and perfunctorily, without a thought to my comfort, yet took care of my needs like they were his own. This mystery man became a shadowy, elusive presence in my waking world. I’d never encountered an actual human being who could measure up to the Dom in my dreams. Maybe no one ever would.

Maybe I should make the most of what I could get, here and now.

Sandro handed me the Coke and winked. “So, you’re a free agent tonight,” he said.

I grinned. “Yep. Trolling for Doms.”

He laughed, looked away, and then back. “Wanna come home with me? We could have some fun.”

I picked up my glass and sipped the cold, sugary-sweet syrup, considering his offer. “You live close?”

Sandro nodded. “Down the street. Walking distance. You can leave your car here, and pick it up later, or in the morning if you decide to stay over.”

It was thoughtful of him to offer me the whole night. Such an invitation was rare in this environment, where most people simply wanted a quick fuck or a fun kink session and didn’t give a shit what you did with yourself after.

I found his excitement flattering, if misplaced. I didn’t feel like anything special these days, but I was up for a quick screw.

“Sure. But let’s enjoy our drinks first. We’ve got all night.”

Sandro had fair-to-good conversation skills. He was intelligent, perceptive, and witty. I warmed to my decision over the time it took to finish our drinks. Maybe the evening wouldn’t be a washout after all.

Sandro sighed. “I wish there were more kink places in this city. I mean, this place is fine but it gets boring after a while.”

I agreed with his observation completely. There were several options across the river from Ottawa in Quebec that offered more hard-core entertainment, but in terms of convenience, this place was closest. And even when I had ventured as far as Gatineau or Montreal, I’d been largely disappointed.

“I hear Toronto is the place to be for this kind of scene,” I said. “Maybe I should move to the Big Smoke.”

“Maybe. I thought about it a couple of times. But my family is here, and my job.”

“I don’t know if I could sacrifice the green space,” I said.

The easy access to nature was one of the things I loved about Ottawa. There were a multitude of parks and treed spaces; bike paths, beaches, and water everywhere. And the Gatineau hills were right across the Ottawa River. I enjoyed hiking and camping more than almost anything else. Spending regular time in nature was essential to my being. I doubted I’d be happy in a concrete city like Toronto.

Then again, was I happy here?

“I heard about this place in the Muskokas,” Sandro was saying. “It’s a ranch, but not the kind of ranch you’d expect in that touristy area.”

“Huh?” I asked. A ranch? I had absolutely no interest in horses.

Sandro nodded. “It’s set up like a real ranch, but instead of horses, they get men to dress like ponies.”

If I had been a pony, my ears would have swung toward him. “What? No way.” Something in me thrilled to the thought of it.

He laughed. “Yeah, they put them in harnesses and bridles and make them do stuff. It’s all set up to make the experience as realistic as possible. At least that’s what I heard.”

I pretended not to be as interested as I was. “Hmm. Weird.”

“Yeah, well, I guess some guys get off on that stuff. Not me. I’m happy with the regular kink experience myself, although it would be nice to have a few more bars to go to.”

Men in harnesses and wearing bridles? A ranch for pony fetishists? Why hadn’t I heard about this before? My balls ached at the thought of it. I’d never explored animal role-play, but the thought of being a pony at a fetish ranch rang every one of my bells. Maybe a fetish ranch was the kind of immersive experience I needed. Sure, it was still a game, but maybe they did it so well you forgot it was a game and became fully invested in submission and objectification.

I drained the rest of my glass. “Ready to go?”

Sandro beamed as his gaze raked over me. “Absolutely.”

AE Lister/Elizabeth Lister is a Canadian non-binary author with a vivid imagination and a head full of unique and interesting characters. They have published many other books, one of which (Beyond the Edge) received an Honorable Mention from the National Leather Association–International for excellence in SM/Leather/Fetish writing.