You are here: Home / New Releases / Rakes in Tartan by Suz deMello (@Suzdemello) 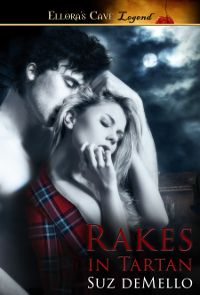 What’s a romance? You may think you know, but…

Right now, most of us see a romance as a love story between a man and a woman that contains a happy ending, with the heroine going off with Mr. Right. But that wasn’t always the case.

Centuries ago, people married for reasons other than love. They married for money, status or property, and love was something found outside marriage. The most famous romance in our literature, Romeo and Juliet, doesn’t have a happy ending, unless your idea of a good HEA is uniting in heaven.

Other forms of art reflected the belief that love was found outside marriage. Medieval troubadours traveled from castle to castle and sang about the joys of courtly love and romantic love. Art often depicted the clash between marriage and love, such as Tintoretto’s Venus and Mars Surprised by Vulcan (1545).

When did romance change, and why?

Pamela, or Virtue Rewarded (1740) by Samuel Richardson, is often mentioned as the first romance novel. The main point, however, was not that the title character had found love but that her persistent rejections of the so-called hero’s attentions finally got her the prize: marriage.

A less moralistic novel, and one that’s often cited as the best of the genre, is Jane Austen’s Pride and Prejudice (1813). Despite its somewhat archaic style, it’s one of the most popular novels in English Literature, and for very good reasons. It doesn’t preach the way Pamela does, but instead reflects the real concerns young women had during the Regency: marrying well and marrying for love, or at least respect. Although arranged marriages for the purpose of uniting property or increasing wealth were still a custom in our culture, the desirability of gaining a life with a partner founded on love rather than money was taking hold, and is reflected in the literature of the time.

Each era has produced literature that’s reflective of the time, and romance novels reflect their eras, too. As the love ideal took hold, more romances were written that reflect the joy of love rather than its discouraging end, and cautionary tales took back seat to entertainment.

Perhaps the greatest changes have occurred in the last few years. First came chick lit, in which the heroine’s goal is not finding Mr. Right but hooking up with Mr. Right Now. Then writers of digital romance broke the hetero barrier and started writing LGBT romance, which doesn’t require the love story to be between a man and a woman. I’m reliably informed that the biggest consumers of M/M romance aren’t gay guys but hetero females. Go figure!

Set in 1816, my book reflects the mores and customs of the Regency. Heirs to their clans’ lairdships, Andrew MacReiver and Tor Kilburn must find suitable brides. As did many noblemen of the time, they journeyed to London for the social season after attending Oxford. They hoped to find love, but not a Nordic fairy, a dragon and a vampire assassin.

But, being a book written in the 21st century rather than the 19th, Rakes in Tartan ends happily.

Here’s what some reviewers have said about the previous books in the Highland Vampires series–These are customer reviews from Amazon.

Temptation in Tartan is the first book I’ve read by Suz deMello. It won’t be the last. The book is well written, easy to follow and easy to read… I would highly recommend the book and I hope that she plans another book to follow in this one’s stead.

RE: Desire in Tartan:

Five stars…”Engrossing… I was grabbed from the start of the book…”
–S.J. Foulkes (Amazon.com)

Five stars… “Super Read!!!… I enjoyed it from the beginning to the end. I couldn’t put it down and read it in one day.”
–Becca (Amazon.com)

Rakes in Tartan by Suz deMello

The social season promises both sex and danger for Torquil Kilburn and Andrew MacReiver, Highland heirs arrived in London to seek brides. The Scotsmen must negotiate the complicated morés of high society to woo and win an exquisite debutante and her passionate, unconventional mother while keeping their vampire heritage a secret.

But evil stalks the ballroom at Almack’s, the streets of Piccadilly, the drawing rooms of the ton. Headless bodies have been found drained of their blood, for another vampire haunts the streets of London, murdering noblemen. As he draws ever closer, Tor and Andrew must fight not only for love, but for their lives.

Her books have been favorably reviewed in Publishers Weekly, Kirkus and Booklist, won a contest or two, attained the finals of the RITA and hit several bestseller lists.

A former trial attorney, her passion is world travel. She’s left the US over a dozen times, including lengthy stints working overseas. She’s now writing a vampire tale and planning her next trip.