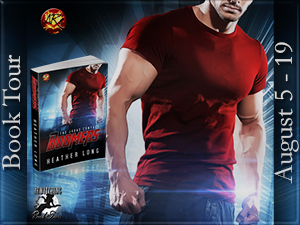 Hope may prove their most dangerous threat.

On the cutting edge of neuroscience, Ilsa is developing microchips that can be inserted into the brain and deliver information. The applications are endless, but her current goal is just to get dogs to return to their owners should they ‘become lost.’ When her college roommate turns up asking for lunch, she’s hardly prepared for the chaos that ensues or the revelation her chip changed the world, and the lives of five heroes from the future. And now they need her help…

Abilities: toxins, poisons and assassination, he can kill with a touch

One of five desperate men sent back in time to save the future, Garrett volunteers to be the doctor’s guinea pig as she studies their neuro-chips. It’s not his first time being a lab rat. In close quarters, the unthinkable happens—an attraction that could kill Ilsa. Drawn together by science, and on the fast track to destiny, Ilsa and Garrett must save his team from their chips before they can end them, and maybe Ilsa can prove to Garrett he isn’t toxic to everything he touches…least of all her.

Heroes come in all shapes and sizes. An alliance with the modern day Halo has given their leader a taste of hope. For these five lonely soldiers, the single emotion may prove their most dangerous threat. 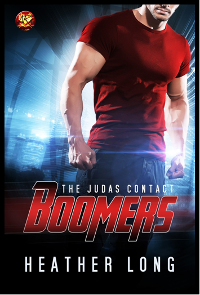 It took most of a day to get the equipment. Fortunately, in the decades since they’d arrived, the team had created stockpiles of weapons, technology, and safe houses. They came from a time when vanishing off the streets into an underground network was the only way to stay alive. They never forgot the habit, no matter how soft the gentle insanity of the so-called modern world became. Garrett, especially, stayed abreast of medical research and breakthroughs. Some nightmares a person never forgot. Security collars and electronic tagging were just a step below the “invisible fences” for pets.

“You don’t have to do this, Garrett. Drake and Rex both volunteered to take your place.” Simon came down to the main level of the warehouse to help him but, instead of loading the van, he studied Garrett’s profile.

“It’s not a problem. I’m the most logical choice. I’ve already developed a rapport with the doctor.” He selected a crate of dried foods. Cooking wasn’t something he enjoyed, but he could add water and heat with the best of them. He liked the noodle cups. They actually reminded him of his childhood.

An oddly pleasant sensation, rather than a painful memory, filled him with every serving.

“Walk me through it again.” Simon let the argument go for the time being, but Garrett wasn’t fooled by his mild tone or patient expression. The telepath may invade their minds upon request, but he kept his own thoughts buttoned up tight.

“We have the estate on the other end of Long Island. It’s extensive and heavily fortified—she can work there. It’s late in the season for the normal tourists, which will provide us with a quiet cover. Once we’re embedded, we’re going to stay in lockdown. I can use an electronic jammer to block cell signals. Depending on how long it takes the doc to finish her work, we’ll check in every day.” The plan was hardly complicated.

“Over a thousand yards. The location is a prime piece of real estate with its own beach. Motion sensors will alert me to any arrivals. No one from the team will approach without notifying me ahead of time. You do realize that this is hardly my first picnic. “

“How are you feeling about Ilsa?”

Garrett swung around to meet Simon’s paler than pale gaze without a trace of humor. “She’s a means to an end. That’s it. She may prove helpful to the cause. Beyond that, I feel very little.”

Which wasn’t entirely the truth but, unless Simon dug down past Garrett’s innate defenses, it was the only truth he planned on sharing. The woman was beautiful, curvy, and real. She possessed a wildly keen intelligence, but he hadn’t missed the way her eyes lit up or the excitement that teased her nipples beneath the too thin shirt as she hammered them with questions about the chip.

Protect her. The chip’s command aside, he understood his task. Keeping her alive to do her work helped the mission. The entire plan fell within an acceptable parameter.

“That’s not what I meant and you know it. Any unusual urges where she is concerned?”

“You mean lust?” Garrett snorted. “No, my brain is still in my head. I haven’t turned into a hulk of monosyllabic testosterone driven by the urge to strip her naked at the first opportunity.” Although he imagined she would be as lovely without her clothes as she was with them. Her height and generous curves gave her a soft, lush look.

“It’s a valid question. You’ve already established a bond with her, volunteered to let her study you and inserted yourself into an uncomfortable and potentially dangerous position. If you flip, it could have severe consequences.” Michael might be their tactical strategist and leader, but Simon counseled their souls. He kept them whole and on track with his unflinching logic and patience.

“You mean if I go all caveman à la Michael? No. Not likely. It didn’t bother me that you were all in the room or talking to her. I doubt that will change during the course of her work. Besides, if necessary, I can put the doc out without harming her physically or mentally. Until we know what she knows, we need to keep her healthy.” Finished with that aspect of the conversation, he inspected the supplies he’d stored. “Will Rory be able to get the FMRI thing? I know we have the rest of the pieces she asked for.” They’d converted the wine cellar of the Hamptons estate into a medical facility. They only used it periodically if an injury were too severe for their high functioning metabolisms to handle.

Which meant not often.

Simon’s brows knitted together. “Garrett…this might be more difficult for you than you realized. It could wake up a lot of dormant memories.”

“I appreciate the concern but enough with the touchy feely crap. This is a job, no different than every other job we’ve done since we got here. The chips are active. We need answers. She can provide us with answers. End of story.” His temper edged toward frost. “Clear?”

“Clear.” Simon exhaled and held his hands up. “But you call us if you need us.”

“Yes, father. I will call you if I have a booboo that needs a Band-Aid. Or maybe I’ll call Michael if I get the sudden urge to go skipping through the daisies with the doc.” He was done playing the game. The faster they got the scientist to work, the faster this would be over. It was a job.

No different than the hundred other jobs they’d performed, great and small, in the last four decades. He checked the gear one last time and shut the van up.

National bestselling author, Heather Long, likes long walks in the park, science fiction, superheroes, Marines, and men who aren’t douche bags. Her books are filled with heroes and heroines tangled in romance as hot as Texas summertime. From paranormal historical westerns to contemporary military romance, Heather might switch genres, but one thing is true in all of her stories, her characters drive the books. When she’s not wrangling her menagerie of animals, she devotes her time to family and friends she considers family. She believes if you like your heroes so real you could lick the grit off their chest, and your heroines so likable, you’re sure you’ve been friends with women just like them, you’ll enjoy her worlds as much as she does.