You are here: Home / New Releases / The Auction by J.R. Gray (@theoriginalgray) 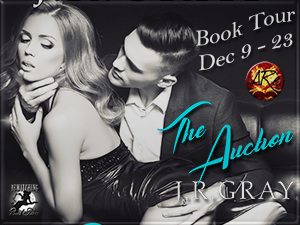 One night changes everything.

Stark is too old to be selling himself, or his services. He’s too set in his ways, too piled in grief, and well…it’s been too long. But when your best friend is a big demanding drag queen, and hosting the event, it’s impossible to say no. It’s one night, he convinces himself, and then he can get back to his reclusive life.

Scotty can handle the club for one night. It’s Christmas Eve after all, and the auction is for charity. If she saw her ex she could deal with it, she hoped and it wasn’t like she had to bid on anyone. But when she comes back from the bar she finds her best friend had other plans, and now she has a date with a mysterious dominant. 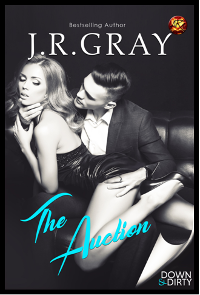 “We are going to be late, and I won’t get a good one.” Cheri linked her arm through Scotty’s, forcing her to pick up her pace.

“I was ready at nine. You just had to try on four pairs of my shoes,” Scotty replied.

“You have better taste in shoes than anyone else on the planet.”

“Because it used to be the only thing I wore.” Scotty gave her a look, ignoring the pain in her heels. Shoes were pain. A pain she used to like. Now it was a stark reminder. But everything was a reminder.

“But I like kicking ass, so it’s an equal trade-off.”

Cheri rolled her eyes and turned into the alley. This was a frequent trek for them while Scotty had been in law school, not so much in the last few years.

“Are you going to be okay if we see her?” Cheri asked.

“Good, because I know she’s on the menu for tonight.”

Scotty wrinkled her nose. She didn’t want to hear about it. She was blocked from Scotty’s mind, mostly. There was still the errant dream, but those could be written off to nothing more than job stress. She just hoped they wouldn’t last forever.

“I don’t care. The moratorium stands.”

Cheri held up her hands. “I thought you’d want to be briefed.”

Scotty took a deep breath and wrote it off. Cheri usually meant well, even if she did love gossip. Cheri probably knew more about Tanya’s sex life than Scotty ever had, and she was more than okay with it.

“Not necessary. It’s been years.” More than that since she’d stepped foot in here. It felt the same and yet different as they trudged up the well-worn metal stairs. Relationships don’t just end. They sink long before, she’d learned, and once trained to see the signs, it was easy to see when they started taking on water. It had been at least six months before the relationship ended that they’d stopped coming to the club. Or rather, Scotty’d stopped coming.

“If you say so.” Cheri took a left before the long hall of private rooms, taking them to the main play space and right up to the bar. “Two gin and tonics.” She looked at Scotty, who nodded. “Let’s grab seats in the back and peruse our options.”

“I’m only here for moral support.” And because Cheri had dragged her out, but Scotty wasn’t going to say as much. She took her drink from the bartender. It was one of the few nights of the year the bar was completely open, as there wasn’t going to be any play.

“And because you had nothing better to do on Christmas Eve?”

Cheri set down her menu and brushed her fingers over the elegant silver inlay. “They went all out this year.”

It was true, the place was decorated to the nines. Mistletoe, garlands, and sprigs of pine garnished every surface. They even had a centerpiece on each table with two little candles. The lights were down low, and it gave the club a romantic air than it usually had with slapping flesh and normal spotlights usually allowed.

“Since people like us don’t have family to spend the holidays with, maybe they figured it would be nice.”

Cheri knit her brow, but she knew she was one of the lucky ones. She’d been raised in the city, and her parents were all welcoming when it came to her sexuality. They’d probably even be okay with the Domme stuff, if they didn’t already know. “Sure you don’t want to come to dinner tomorrow? My parents would love to see you.”

“As much as I love playing the role of your girlfriend.” Which she had for a few years, while they were both in undergrad. “I don’t want to keep intruding. They are going to start asking why you’re not popping the question.”

“We are much better as friends.” Cheri wiggled her brows, making Scotty laugh.

Cheri was the one who’d introduced her to the club, but things between them had only ever been casual play, and even that had ended when Tanya came around.

“We are. Now look here. There are five Dommes up for auction tonight. Five.” Cheri was practically bouncing in her seat.

“What?” Scotty made herself skim over her ex’s name, reading the bios of the other Dommes listed for auction. “No shit. It has been awhile since I’ve been around, hasn’t it? I didn’t think there were that many Dommes who played here.”

“Have I not been trying to get you to come play?”

“How do the Dominants look?” Scotty ran her finger along the other side, checking out the penises.

Cheri winkled her nose. “Are you serious?”

“You may be a confirmed lesbian, but you know I’m bi. I want to see what’s on offer.” In reality, nothing jumped out at her, but it was easier to look at the dick side of the menu so she didn’t have to see Tanya’s name. She could read the entire thing without getting sick to her stomach.

“I really thought you got that out of your system.” Cheri laughed. She loved to give Scotty a hard time, but Scotty never took it personally.

“I don’t know.” She didn’t plan on bidding at all. The number she’d been given at the door was going to stay firmly on the table.

“Pick at least two.” Cheri flipped the menu back to the female side and pointed. “I’m not taking no for an answer. I want Tanya to see you putting yourself back out there. She’s fucked every sub who’s walked in the door since you.”

“Don’t take it hard. You had to have assumed.”

Scotty looked at her drink.

“You thought she was pining after you like you have been her?”

She shrugged one shoulder. “She could realize any day what a mistake she made.”

Cheri put a hand on her arm. “She made a huge mistake, but her way of dealing with it is drowning in pussy, and you should take a note on that.”

Cheri didn’t mean it, but her words were like a knife to an old wound in Scotty’s chest. She was such a fucking idiot for still caring.

“Can we not?” The plea in her voice gave her away. It was too easy to slip back into that mindset. This was why she’d buried herself in her job. It was easier.

“Of course.” She could hear the frown in Cheri’s voice without looking at her.

“It’s going to start.” Scotty took a drink and sat back. “Tell me who you’re bidding on.” She moved her gaze to the submissive list on the female side of the card.

“I was thinking of bidding on Blue.” Cheri pointed to a name, and Scotty obliged her by reading the bio. They were similar to the weird things people put on dating sites. Along the lines of long walks on the beach, only more personalized. Blue’s started with her favorite breakfast cereal.

Scotty shook her head. “She’s right up your alley.”

“If not her, there are a couple after I’m willing to drop cash on. Now tell me your picks.”

Scotty sighed and flipped over to the male side again. She couldn’t even stomach looking at the names near Tanya. “How about Alexander?”

“He’s no Tarzan.” Cheri scoffed after reading his bio.

Cheri gave her a look. It was her signature “he’s way overrated” look.

“Yep.” She sighed and flipped over her own list. “I can’t believe I’m being forced to look at the beefcakes.”

“They can’t all be bad.” Scotty was secretly hoping they were all bad, then maybe she could get off without bidding.

“There are a few tolerable ones, and a couple I don’t know. I guess we’ll have to play it by ear.”

Her words were music to Scotty’s ear. “Sounds good.”

“What?” Scotty was confused.

“This is for charity so you must spend some of your nest egg, and you have got to stop avoiding dating. Tanya is a jackass, but you love submitting. Don’t let her take that away from you.”

She nodded and was saved by the lights going dim.

J.R. Gray, when not staying up all night writing, can be found basking in the warm glow of the Miami sun, or at the gym where it’s half assumed Gray is a permanent resident. A dominant, pilot, and sword fighting enthusiast, Gray finds it hard to be in the passenger seat of any car. Gray frequently interrupts real life, including normal sleep patterns, to jot down nonsense. The bane of Gray’s existence are commas, and even though it’s been fully acknowledged they are necessary, they continue to baffle and bewilder.

If Gray wasn’t writing…well, that’s not possible. The buildup of untold stories would haunt Gray into an early grave or possibly a mental institution where the tales would end up on the walls in crayon and finger paint.

For more information on other books by J.R., visit his website: http://www.jrgraybooks.com