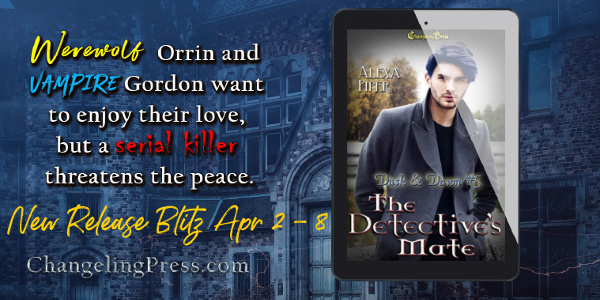 Gordon was slow to realize he loves his werewolf mate, but it takes him even longer to figure out he still has his own demons to deal with. A past hurt has left a scar on his soul. Gordon’s werewolf detective might just be what Gordon needs to heal the scars from his past. The only question is whether geeky Gordon is enough for serious and seriously handsome Orrin.

Together with Maxim, New Amsterdam’s bardic vampire hunter, Orrin and Gordon are on the case to save the city from sinking into fear and panic as more murders challenge the peace. Through turmoil and death, Orrin and Gordon must find a way forward.

NOTE: This book contains scenes of assault and kidnapping that may be triggers for some readers. 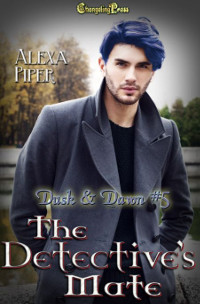 New Amsterdam Police Station was a nice neoclassical building, and all things considered, it wasn’t a bad place to work. Most of the time, the coffee was even decent.

Orrin had not usually been one to leave the station early, but Bachman, his protégée, was more than capable and didn’t need him holding her hand while she finished her paperwork. Also, Orrin had a hot date at the morgue. He checked the time on his computer, finished one more email, then logged out. Bachman briefly looked up from what she was doing.

“You always look cheery when you are going to see the boyfriend,” she commented, then did a double take and looked straight at him. “Or should I be saying mate?”

Orrin grabbed his bag and stuffed his work tablet into it. “Boyfriend is fine,” Orrin said, because it was, and it also was easier around the station, since most of Orrin’s colleagues weren’t werewolves but were human like Bachman herself. “Also, are you saying I’m usually grumpy-looking, Bachman?”

“Just very, very serious, sir.” She went back to typing. “I think cheery suits you. And I think the mate-slash-boyfriend does as well.”

Orrin couldn’t do anything about the wide grin that threatened to make his cheeks ache. “Well, thanks. I’ll tell Gordon you said hi.”

“Hmm-mmh.” Bachman winked at him as Orrin walked toward the elevators, and even he noticed the spring in his step.

The worst thing about any morgue was the smell of lingering death. Orrin sniffed the air when he got to the basement hallway in the Forum that housed the forensic labs, though he was hoping to pick up a whiff of Gordon’s dusty rose scent rather than eau de corpse. Yet all he got was vinegar and bleach cleaning solution. Gordon had probably received a fresh batch of New Amsterdam University interns and had set them to cleaning every nook and cranny so they could familiarize themselves with the place.

On the bland-looking wall on the left, a framed, vintage Dracula movie poster added a dose of vampiric cheer in bold print and even bolder colors to the basement labs, and opposite it, Gordon’s office door stood ajar. Orrin peeked around the doorframe to see if Gordon was in there.

What a nice view, Orrin though, watching Gordon hanging a framed piece of artwork, his nimble surgeon’s fingers adjusting the frame this way and that. The view was much helped by the skinny jeans Gordon was wearing. The jeans were a silvery gray, clashing with the raspberry surgical top, but nicely bringing out Gordon’s latest hair color, electric blue that shifted to icy white at the ends. I am very fortunate to have found a mate who looks great in skinny jeans and likes wearing them.

Orrin indulged in a quick fantasy centered on removing said pair of skinny jeans, and in the fantasy, that task was easy, and Orrin’s mate had decided to go commando. Orrin imagined Gordon hard and ready, imagined touching, tasting…

He smothered that fantasy quickly when he felt his own aching physical reaction. Instead, he refocused back on the present: Gordon, tinkering with the frame.

Gordon jumped, dropped the frame, and cursed as he turned around. “Fucking hell,” he said, his stance relaxing as he saw Orrin. “Make some noise every now and then, will you?”

Orrin chuckled. “Thought I was a living corpse, Doctor?”

“Never,” Gordon said, picking up the frame once more and putting it on its hook with much less fumbling than before. “Those shamble, noisily.” He turned to Orrin again. “And you are sneaky, like a true predator, Detective.”

Orrin walked into Gordon’s office, which smelled of roses, Gordon’s scent. It still had an undertone of morgue, of course. The Lord Helmet cookie jar added the herby flavor of good weed cookies, and all the mint-in-box collectibles came with their own aroma of high-end plastic, but Orrin focused on Gordon. Two more steps, and he was pulling the vampire into his arms and pressing his lips to Gordon’s.

Gordon yielded to being held after a moment, turning fully to Orrin and allowing the werewolf to fuse their mouths and run hands over Gordon’s body, all the way down to his ass.

“Hi,” Orrin said when they broke their kiss.

“Hello, handsome,” Gordon said, and while the vampire wasn’t one to give pet names, Orrin still enjoyed being called handsome, not least because it came out of his mate’s mouth. “Are you here to cuff me and take me away?”

Alexa Piper writes steamy romance that ranges from light to dark, from straight to queer. She’s also a coffee addict. Alexa loves writing stories that make her readers laugh and fall in love with the characters in them. Connect with Alexa on Facebook or Instagram, follow her on Twitter, and subscribe to her newsletter!