You are here: Home / New Releases / The Difference Between by Stephanie Burke (@Flashycat @goindimarketing) #giveaway

Rotic, a human boy, was a slave when High Orc Chieftain Vizri first rescued him. Now, as Vizri’s adopted son, Rotic has become a renowned warrior and leader of the Orc Army. Rotic is confused when he’s gifted with a male consort, but he knows he has earned his place in life, and he has full confidence nothing will ever take his power and position away from him.

Ogun is used and broken when he’s brought to the castle of the High Orc Chieftain as tribute — actually a sly insult — by the underhanded Dark Elves. When Ogun is named Consort and meets Rotic, his new partner, he finds himself lost in a whole new way of life before the sun has set. He has a new position and a growing relationship with Rotic. Nothing could ever ruin this for Ogun.

But with treacherous humans threatening the Orc Nation, magical and cultural landmines to traverse, and a new wife added to the mix, Ogun and Rotic’s lives are changing faster than they can blink. Ogun and Rotic have to learn to adjust and overcome before the differences between them become an insurmountable mountain that will destroy them both.

Publisher’s Note: The Difference Between was published previously by another house and has been extensively edited for re-release. 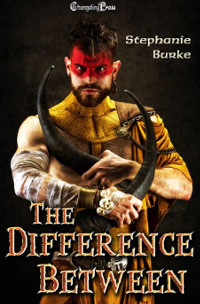 The tent flap ripped open with surprising easy. But then, Vizri didn’t expect much from human beings on the whole. The dim light in the tent did nothing to hamper his vision, as Orc eyes were designed to be useful in the dark tunnels that spawned their ancestors as well as the bright sunlight in which the multitudes of humans dwelt.

The first impression? Humanity smelled. Even before he entered the tent the smell of sour milk and salt filled his nostrils, making him snort as he curled his nose in disgust. The place also smelled of human sex and excrement. It was nearly enough to make his eyes water.

It was a good thing his eyes adjusted so quickly, because almost as soon as he stepped foot inside the hide monstrosity the humans decided to call a domicile, he had to duck to the right as a pale blur flew at him from out of nowhere. He shifted his weight and reached behind him, gripping the shaft of his great-ax, but something, some odd instinct, made him stay his hand.

Unlike the confusing humans, Orcs always followed their instincts. He might be reluctant to swing but he was no fool. And an Orc who was always prepared for the worst was an Orc that lived to languish in the care of his wives. So he gripped the handle of the great weapon strapped to his back and he tracked the blur with his eyes.

It was a human, a small one. At least it looked — he inhaled deeply, his nostrils flaring, and nodded. Indeed, it was human, small… wounded, fearful, and furious at the same time. Interesting.

He was deciding if he should just put it out of its misery when it turned and snarled at him. He could not stop his brow-hair from rising as he stared at the pitiful creature. Although it never showed in his expression, the actions of this small wretch… delighted him. This small thing behaved in a most appropriate alpha-type manner. It was refreshing and confusing to see proper behavior out of a human, especially one so small and wounded.

It looked underfed and wild as it glared at him, its chest heaving as its eyes tracked rapidly around the room, looking for an escape route while keeping him firmly in view. He tilted his head to the side and relaxed his stance as the small human snarled again.

There was a table between him and the human, so he decided he had time to test a theory that had been raging along the lower courts of his chiefdom for years. Were humans truly intelligent beings, capable of instinctual thought and the ability to act properly on those impulses, or were they just the Elder Gods’ evolutionary joke?

He moved forward and unclasped a human weapon, a well made great sword, from his side. He had meant to bring it as a present to one of his wives who loved cute little trinkets like this one, but now it would do well to serve another purpose.

If the small human could pass his test, he would not put it out of its misery. If it actually reacted in the correct manner, then he might take it home as a pet and spare its life. One of his thirty-seven wives might like an intelligent toy to fetch and carry, if they could get past the smell.

He lay the sword on the table and stepped back to gage the creature’s reaction. When it just stood there, glaring at him, eyes still darting around the tent, he reached into another pouch at his side and withdrew a small jeweled dagger. He had taken it from the treasury the human in charge of this ramshackle village had acquired and unlike the worthless gold and other somewhat more useful jewels, he thought it could be bent and pounded into something like a bit of jewelry for one of his wives or for his newest consort. He moved forward and laid it on the table as well.

Still the small creature didn’t move, but its eyes were darting back and forth between him and the weapons, its scowl growing deeper.

Finally, Vizri unwound a heavy steel bolo from around his waist, a very important weapon in Orcish warfare, dropping that beside the dagger before he again stepped back. There. He had given the creature three options. He would wait and see if it was intelligent enough to realize he had given it a choice.

As he waited, he examined the pitiful thing, noting the many and varied differences between humans and Orc. It had none of the advantages that nature had blessed the Orc with for survival, which led many species to speculate that humans really were nature’s big joke.

It had thin skin, through which he could see its red blood pumping through its veins. Its ears were rounded and placed on the side of its head, not sharply arched and placed on top so that they could swerve and easily pick up the sounds of enemies approaching or sneaking around from behind. It had no claws for defense, no horns for intimidation, and worse of all, it had no protruding lower tusks. How could it properly mate if it could not gore its female into ecstasy?

Humans were a strange breed that had somehow managed to grab a foothold in the Orc territory.

From sex-shifting, shape-shifting dragons to undersea worlds, sexually confused elemental Fey and homo-erotic mysteries, all the way to pastel-challenged urban sprites, Stephanie has done it all, and hopes to do more.

Stephanie is an orator on her favorite subjects of writing and world-building, a sometime teacher when you feed her enough tea and donuts, an anime nut, a costumer, and a frequent guest of various sci-fi and writing cons where she can be found leading panel discussions or researching varied legends and theories to improve her writing skills.

Stephanie is known for her love of the outrageous, strong female characters, believable worlds, male characters filled with depth, and multi-cultural stories that make the reader sit up and take notice.