Hello! I’m Cecilia Tan, and right now I’m virtually touring my gay Navy SEAL romance, WATCH POINT. At each stop on the tour, leave comments to be entered to win a gay/queer romance prize pack from yours truly, including not only a copy of Watch Point, but a few of my other books (The Prince’s Boy, Magic University) and a Daron’s Guitar Chronicles swag pack with notebook and stickers. 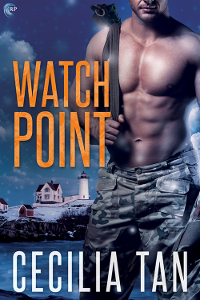 Eric Sakai-Johnson joined the Navy SEALs to protect his country and the people he loves. After discharge, he finds himself relegated to protecting big pharma billionaire Aiden Milford from assassination attempts and kidnapping. Until Aiden reneges on a promise, fires Eric, and lets Eric’s mother die with millions of dollars in medical debt.

Chase has been chafing under his father’s autocratic control. A gay hookup app has been his only ticket to rebellion—to clandestine moments of freedom, excitement, and danger. Now it’s his ticket to a deep connection and amazing sex with his “captor.” On the rocky island where they’re sequestered, Chase finds Eric to be everything he wants in a man: quiet, strong, capable, and honorable . . . until he finds out he’s been captured for real.

20% of all proceeds from this title will be donated to the Russian LGBT Network.

Each year, Riptide Publishing releases a holiday collection in support of an LGBTQ charity. Twenty percent of the proceeds from this year’s collection will be donated to the Russian LGBT Network.

The Russian LGBT network was founded in April 2006. It is an interregional, non-governmental human rights organization that promotes equal rights and respect for human dignity, regardless of sexual orientation and gender identity. They unite and develop regional initiatives, advocacy groups (at both national and international levels), and provide social and legal services.

To learn more about this charity or to donate directly, please visit their website: https://lgbtnet.org/en.

This collection would not be possible without the talent and generosity of its authors, who have brought us the following holiday stories:

Pre-ordering this collection will allow you to download each story two days prior to its official release date, as well as save 20% off the list price of the individual books.

Her short stories have appeared in Ms. Magazine, Nerve, Best American Erotica, Asimov’s Science Fiction, and tons of other places. She was inducted into the Saints & Sinners Hall of Fame for GLBT writers in 2010, was a recipient of the Lifetime Achievement Award from the National Leather Association in 2004, and won the inaugural Rose & Bay Awards for Best Fiction in 2010 for her crowdfunded web fiction serial Daron’s Guitar Chronicles.

She is the editor of the Baseball Research Journal and is publications director for the Society for American Baseball Research. She is also a part-time taekwondo instructor and is a certified therapist in an Asian bodywork style known as Okazaki restorative therapy. (That’s a fancy way of saying she can break you and then fix you up again.)

She lives in the Boston area with her lifelong partner Corwin and three cats. Find out more at www.ceciliatan.com.

To celebrate the release of Watch Point, one lucky winner will receive a swag bag including a copy of Watch Point, The Prince’s Boy, Daron’s Guitar Chronicles Vol 1, a DGC T-shirt, notebook, and stickers! Leave a comment with your contact info to enter the contest. Entries close at midnight, Eastern time, on November 11, 2017. Thanks for following the tour, and don’t forget to leave your contact info!